Could the Olympus 593 have been windmill-restarted during supersonic flight?

The Rolls-Royce/SNECMA Olympus 593 (which powered the Concorde) used a complex intake-ramp system to improve the engine's efficiency and prevent an engine shutdown or failure during supersonic flight from tearing the aircraft apart; it did the latter by dumping almost all of the intake air overboard via a set of spill doors, allowing it to bypass the inoperative engine and thereby avoid the considerable drag generated therein.

On the other hand, a windmilling engine restart (one of only two midair relight methods possible for the Concorde, as it had no APU - the other being the use of bleed air from a still-operating engine - and the only one available in the event of a quadruple engine failure)1 requires that ambient air be forced through the engine in order to get it spinning, which would seem to necessitate closing the spill doors and not dumping the intake air overboard.

Could the Concorde's engines have been windmill-lit during supersonic flight, or would the aircraft have had to have been slowed to subsonic speeds prior to attempting a windmill restart?

1: While admittedly an unlikely scenario, there are multiple possible ways for this to happen other than fuel exhaustion; possible examples would be if a Concorde inadvertently flew through a volcanic ash cloud, or suffered fuel contamination, or experienced an upset at high altitude.

Yes they could be re-lit without cross-bleed (all engine flame-out above M1.2).

Regarding lack of APU, Concorde has emergency power generation based on hydraulic power (which will be operational above M1.1 due to windmilling and is used to power some or all the fuel pumps for the re-start). (If you're wondering about slower speeds, Concorde would use RAT.)

Regarding the spill-doors, they do not dump all the air out. The automatic operation is a function of inlet pressure (among other parameters). They will open to reduce pressure build-up (and may also open at low power setting above M1.3), but air will still enter the engine and exit the back end.

The all engine flame-out above M1.2 procedure (first 2 pages attached) is simple in nature and does not contain any notes on manual spill door operation. To summarize it:

And below is the optimum re-light envelope. 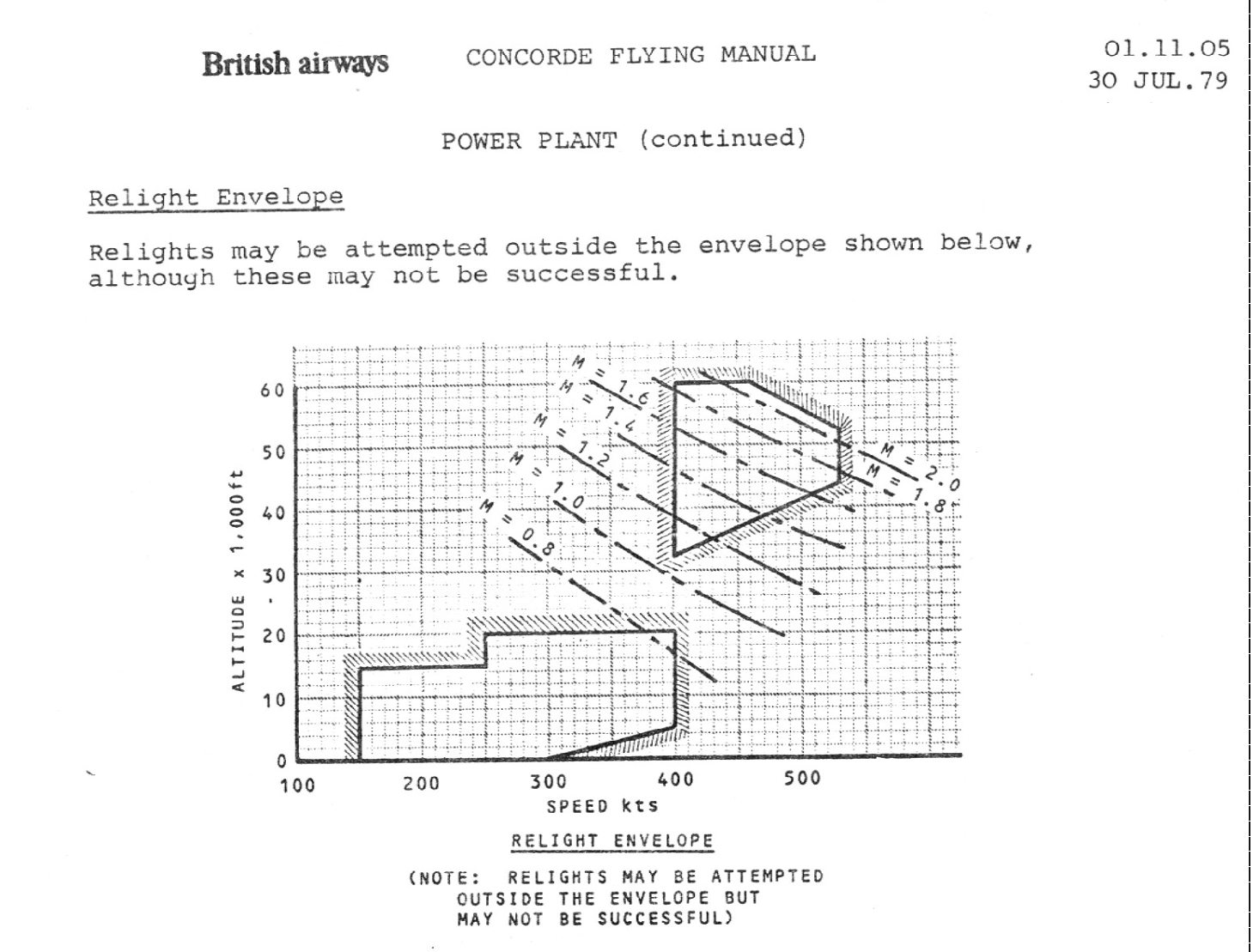 Not the answer you're looking for? Browse other questions tagged supersonic engine-failure emergency-procedures concorde or ask your own question.

11
Why did Concorde not have horizontal stabilizers?
9
How common were (are?) hydraulically driven fuel pumps?