Why complex landing gears are used instead of simple, reliable and light weight muscle wire or shape memory alloys?

Muscle wires actuators are really simple, have a high power density and are reliable. Landing gears on other hand are used only twice per flight while taking off and landing (if everything goes well though). During flight these machines are not useful and there are numerous gear up landings because of landing gear failures.

What is so complex in landing gears?

Why are electric motors/hydraulic actuators used instead of muscle wire actuators in landing gear which are simple, light weight, reliable and cheap? (If there are electric power requirements, that can be achieved by supercapacitors.)

Shape-memory alloys change their shape with temperature, with control usually achieved with electric heating in one direction, and back with convective heat transfer to the environment. There is one specific temperature where the change in shape occurs. There are two huge problems with this:

I also don't think they actually scale to the required forces and displacements well. A 2 mm wire bends quite easily, 2 cm rod, not so much. The thicker will of course need more force to bend—which is OK—but it will also break much sooner, because the difference in strain is bigger.

The weight/complexity of modern landing gear is not in the extension mechanism, that is relatively simple (a hydraulic cylinder typically).

The complexity of the gear comes from the robustness of the design. 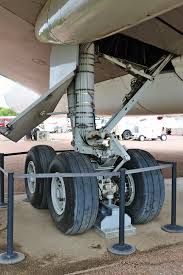 (Not the greatest picture), but the retraction mechanism there is the simplest part of the gear. The complex part is the linkages/hydraulic dampeners (shock absorbers), brake systems, etc. The structure needs to be there because you have a (in the case of an A380) a 1,234,000lb (600 tons) aircraft slamming into the pavement at about 300 feet/min.

There needs to be a hydraulic system for the brakes, so they already have hydraulic systems there. The other nice thing about hydraulics is that they can be extended manually in the event of an electrical failure.

So what would you really gain by introducing a complex system like muscle wires, given the additional failure modes? For example lets say your gear bay is really cold from your trans-atlantic flight at 45,000 feet and your electrical system fails? Is your Ram-Air turbine and batteries going to be able to supply enough current to keep the system extended, or retracted if need be? You don't want your gear hanging out when you are trying to make the airport in a glide.

Hydraulics are used because they are proven cheap, reliable, robust, and easy to work on. Many aircraft systems are hydraulic (including control surfaces) for exactly that reason, as well as muscle wire only being around for a short time.

That isn't to say that shape-memory alloys don't have an application in the aviation world. Many aviation companies are looking at using SMA's in applications such as engine control and wing shape shifting applications, but they are a long way from being used in practice.

Not the answer you're looking for? Browse other questions tagged aircraft-design landing landing-gear or ask your own question.

6
Is it feasible to replace brakes on airplanes with electric motor/generator?
19
Why don't airports use arresting gears to recover energy from landing passenger planes?