What is the effect of altitude on true airspeed?

I know that wind is taken into account when we compute the TAS(true airspeed) and GS(ground speed). However what is the relationship between the TAS and altitude?

For example: What is the true airspeed on the level flight if the headwind is 20 mph and ground speed is 100 mph at 30,000 feet altitude?

If you know GS and local wind speed, the TAS always the same, regardless of altitude. The true airspeed is called "true" because it is exactly how fast you are moving relative to the air. Picture it as a person in a weather balloon (which does not move relative to the surrounding air, i.e., TAS=0), pointing a radar gun at your aircraft to measure its speed. The results would be the same regardless of altitude, temperature, pressure, etc. This is what sets TAS apart from pretty much any other speed like IAS, CAS, EAS and Mach.

Only at truly ridiculous altitudes you would have some problems with calculating TAS, due to the increased orbital radius from the center of the Earth. However, at this point, you're well into the near vacuum of space which means that the whole concept of 'air' speed is quite silly.

The true airspeed (TAS) can be calculated from the indicated airspeed (IAS), which is derived from the pitot tubes and static ports, as follows:

where $ M $ is the molar mass of air and $ R $ is the universal gas constant.

Using the international standard atmosphere for $ P(a) $ and $ T(a) $, one can plot the TAS as a function of altitude: 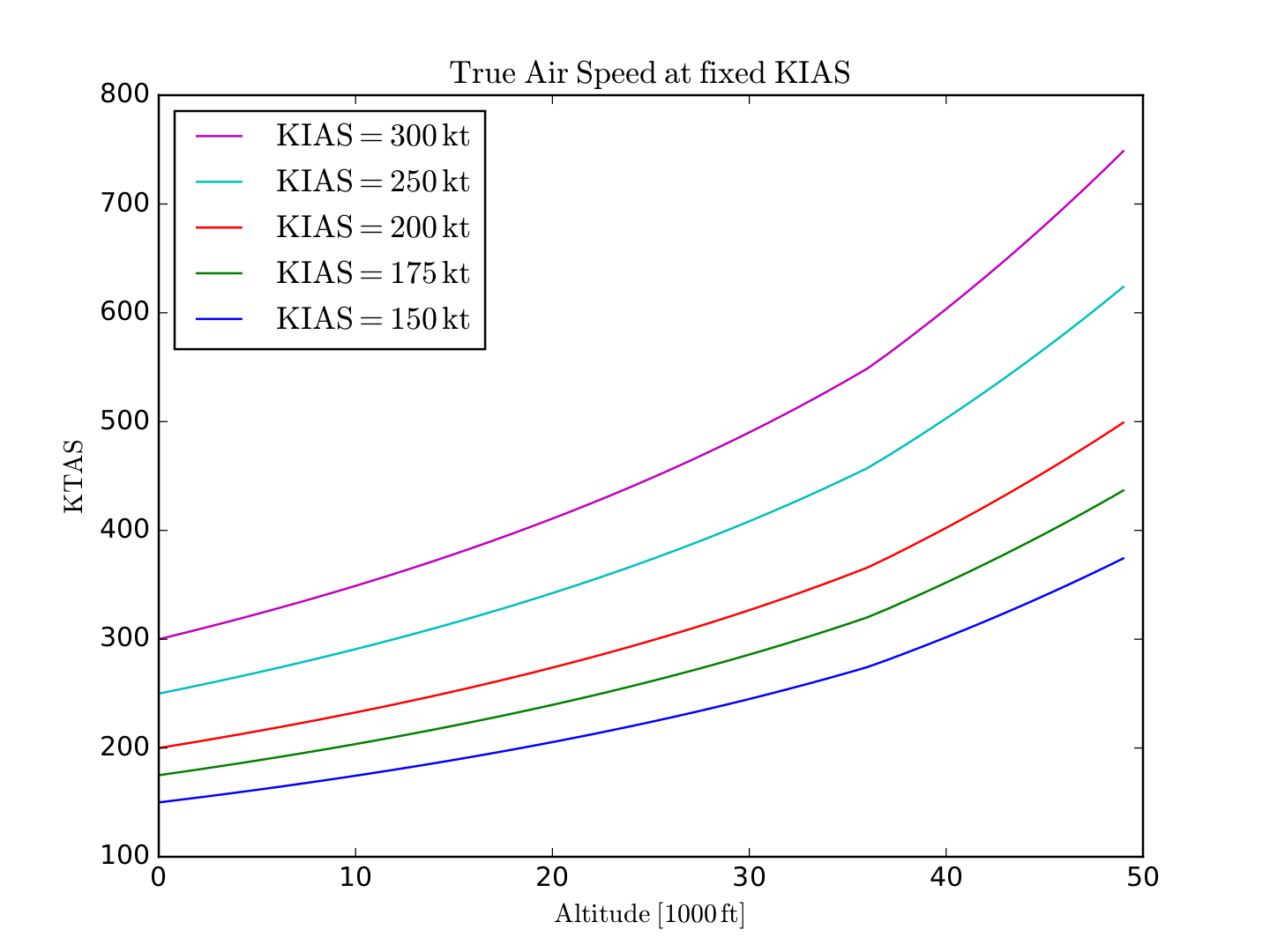 The ground speed (GS) is then given by the vector addition of the TAS and the wind speed: $$ \mathrm{GS} = \mathrm{TAS} + v_\mathrm{wind} \cos(\alpha) , $$ where $ \alpha $ is the angle between the wind direction and the track of the aircraft ($ \alpha = 0^\circ $ for tailwind, $ \alpha = 180^\circ $ for headwind). This step is independent of pressure or temperature and as such independent of altitude. This means for a given TAS and headwind component, the ground speed is the same at all altitudes (for your example: 100 mph GS with 20 mph headwind implies 120 mph TAS at all altitudes).

Not the answer you're looking for? Browse other questions tagged airspeed measurement or ask your own question.

2
How to find TAS for given CAS, FL and OAT?

1
How do you calculate indicated airspeed on a flight plan?
1
How does headwind influence the results of a pitot tube and therefore the airspeed indicator?
9
How to calculate the real Ground Speed from True Air Speed?
28
Does a sudden drop of the velocity of the headwind affect the airspeed by lowering it?
9
What type of airspeed are wind speeds given in?
2
What is the relation between IAS and TAS at a constant altitude?
1
Temperature sensor are needed to compute True Airspeed for low speed aircrafts?
1
Why do gusts change the airspeed during landing, but turning (which changes where the wind is coming from) does not?
2
Why are true and indicated airspeed different?