Was the colliding object in the Guadalajara accident ever identified?

In December, four months ago, a 737 landing in Guadalajara apparently hit an object and damaged its nose. At the time it was suggested that it might have been a small drone.

Has the object been positively identified?

According to Boeing, there was no foreign object involved at all, and the cause of the damage was an implosion of the radome due to differential pressure, caused by improper installation of a seal:

On May 31st 2019 Boeing reported that a visual inspection of the radome did not show any evidence of a hard or soft body impact, no DNA material was found. Boeing concluded: "The review showed that an interface seal was installed around the entire periphery of the radome with no openings. This configuration lacked the approximately 8 inch opening in the seal along the bottom of the radome interface specified in engineering drawings and the Airplane Maintenance Manual (AMM 53-52-00) radome installation task. This opening in the seal is required to allow the radome area to drain and for equalization of pressure changes across the radome during flight. A review by our engineering team concluded that the lack of this gap likely resulted in differential pressure across the radome during descent which may have contributed to an internal collapse of the radome." 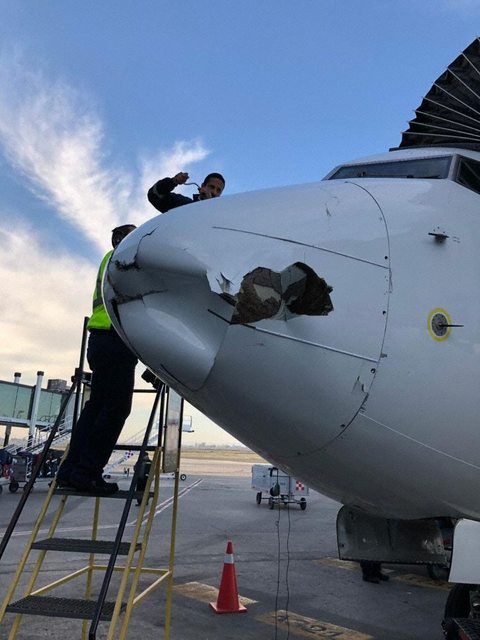 Not the answer you're looking for? Browse other questions tagged accidents mid-air-collision or ask your own question.

4
How reliable are stick shakers?
4
Can a drone hitting a plane be mistaken for a birdstrike?
10
How much responsibility does ATC have to alert a flight about being in a dangerous situation?
5
Is there (some form of) penetration testing in aviation?
16
Is there an abnormal condition that could have caused this fatal accident involving a stall?
3
Was the 1992 Gimli DHC-4 Caribou accident ever investigated?
6
Why are/were three-pointer altimeters so prone to being misread?
29
Has a life raft ever been successfully deployed on a modern commercial flight?