Can a drone be seen on TCAS?

On condition that the pilot reports to ATC, an aircraft's TCAS sees a drone in the vicinity.

How can the pilot be sure that it was a drone on TCAS? What kind of symbol is shown on TCAS that can be identified as a drone? Or is it just a primary radar target pick up by TCAS?

If a pilot reports a drone near the aircraft, what he means is that he (visually) has seen a drone out the window, not that it is indicated on an instrument anywhere. Besides, TCAS does not know different aircraft types, so even if a drone had a transponder and it was presented on a TCAS, the pilot would have no way of knowing that it was a drone (as opposed to any other aircraft).

Or just primary radar target pick up by TCAS.

TCAS is NOT a radar. It is not able to display anything without a transponder. And even ground based primary radars will not necessarily pick up a small drone.

TCAS is based on aircraft transponders, so unless the drone has one installed it cannot be seen by TCAS.

At least no commercial drones intended for consumers have transponders installed. On the other hand drones are not allowed in airspaces used by airliners so there should not be a need for one.

It's already been said TCAS is not a radar, but how come it knows the bearing, and how does it work with the different transponder types?

A basic ground secondary surveillance radar sends an interrogation signal as it sweeps the sky, and the transponders in the direction of sending reply.

A TCAS system is similar, by having an on board directional antenna, the plane sends interrogation signals, and airborne transponders reply to it.

The reply delay would indicate the distance, the reply will contain the barometric pressure (which is used to discern the altitude difference), and the directional antenna will display the relative bearing.

The bearing is informative only (for display), and its resolution is not used in the decision making. 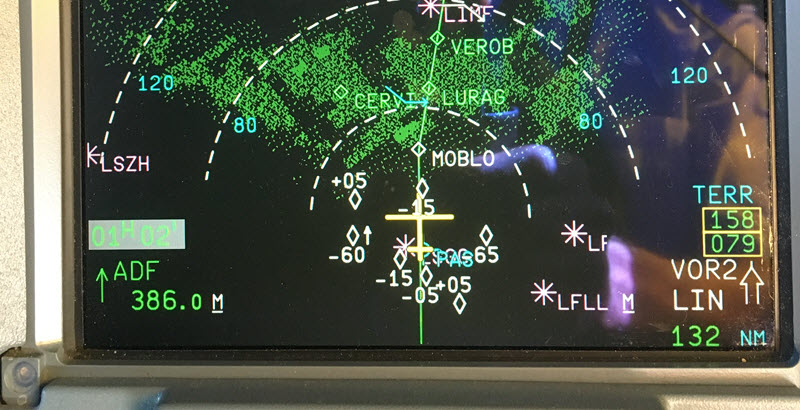 White diamonds show other traffic with +/- relative altitude in hundreds of feet and arrows would indicate climb/descent (flickr.com).

The TCAS' decision (conflict resolution advice) can be cooperative as well in Mode S. So if a TCAS of one plane says "climb", this information is sent, so the other TCAS in conflict would order the opposite, for example.

Once an RA has been issued, the vertical sense (direction) of the RA is coordinated with other ACAS II equipped aircraft via a mode S link, so that two aircraft choose complementary manoeuvres. (SKYbrary)

So if the unmanned aerial vehicle does not have at least a barometric transponder (Mode C) system, TCAS equipped aircraft won't offer conflict resolution.

ACAS II will not detect non-transponder-equipped aircraft and will not issue any resolution advice for traffic without altitude reporting transponder. (SKYbrary)

But what about having only an ADS-B transponder on the UAV? TCAS still needs Mode C/S on the other plane, ADS-B only permits fewer interrogations.

Hybrid surveillance does not make use of ADS–B's aircraft flight information in the TCAS conflict detection algorithms; ADS–B is used only to identify aircraft that can safely be interrogated at a lower rate. (Wikipedia)

Not the answer you're looking for? Browse other questions tagged tcas or ask your own question.

21
How does TCAS work?
17
Can TCAS cope with situations involving more than two aircraft?
4
What is the need for TCAS?
3
Can you have TCAS RA if your other traffic only have TCAS TA?
11
What is the range of TCAS?
1
Could TCAS be used as a backup source for position, attitude or air data?
1
How is the TCAS negotation information encoded?
2
Why does setting the Legacy 600's transponder to standby mode also deactivate its TCAS?
2
TCAS II - bottom omni-directional antenna