The "Baby Boeing" 737 started life in the 1960s with roughly half the thrust and around 60% of the weight as the 757. In stages the 737 grew into a capacity squarely in the range of the 757. Originally, it prospered as a smaller regional jet. The Max 10 essentially will be a 757.

Is it possible the longer 757 airframe is a better match for the LEAP engines? Does the older, more forgiving AR 8 wing make it a safer aircraft?

Seems (forgive me) like comparing the graceful look of a thoroughbred, built for what it does best, compared to an overloaded old quarterhorse. Is the 757 worth another run? 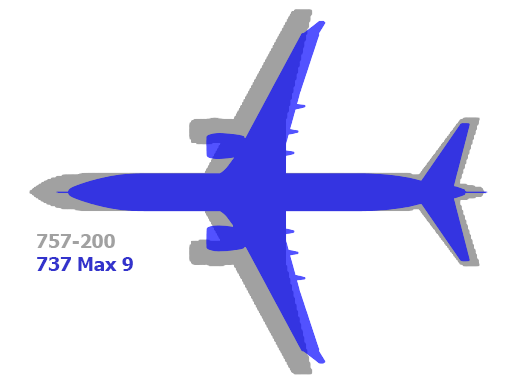 @Brilsmurfffje and @CarloFelicione already raised good practical points, namely the indirect airline costs and why airlines would favor the 737 over a 757 re-engine, and the reboot costs.

If we look at the two planes from a pure engineering viewpoint, the 757 makes for a lousy substitute.

The MTOW is 27 tonnes heavier, but we'll gloss over that and say Boeing will certify it at a lower weight.

Bad wing (for the mission)

Bigger wing is higher empty weight, i.e., the plane has more material, and subsequently the associated manufacturing costs. 13 tonnes of more stuff not counting the re-engine – newer engines are heavier. As for using CFM LEAP, between the highest 737 Max thrust and lowest 757 thrust option, the 757 has 13 kN more, so we're okay there.

Those 13 tonnes at approx. \$1,700/kg OEW:unit cost correlation already make the 757 some 22 million USD more expensive without taking into account the development cost associated with a re-engine. Unlike MTOW, there is no workaround for that.

Secondly, the 757's bigger wing is really bad for the cruise economy of the 737 missions. Low wing-loading is good for maneuvering and for using short runways, but cruise economy comes from aspect ratio and – ideally if it won't impact too much the takeoff performance – high wing-loading.

The 757 needed such a wing for fuel carrying reasons (volume and MTOW), after all it's suited for transatlantic operations using older engine technology. But when that much fuel is no longer needed (re-engine), the physical big wing remains.

Not for cheap it won’t. The 757 went out of production in 2004. Boeing has since dismantled the tooling for that airplane and it would cost a lot of money to get that set up again. Then all the subcontractors have to be brought up to speed as well.

Even if you could build 57s again - and there is a market for them - it would be getting increasingly outdated compared with modern airliners without a major upgrade to the standard avionics and systems.

In the end it’s probably much cheaper to address and fix the 737 MAX’s woes than to bring that airplane back.

Theoretically, yes! In practice, no

It all has to do with the typerating of pilots/crew and ground equipment. An aircraft like the 757 would be new to the fleet of many of the 737 Max operators. This means that they have to recertify pilots/cabin crew, purchase new ground handling equipment, train maintenance personel and invest in new stockparts.

13
Why didn't the Boeing 757 share the 767 fuselage?
9
Why is the A330neo more efficient than the A350 on shorter routes?
6
What is the average weight difference between composite and metal airliners?
4
What would be the impact of replacing the engines on the 737 MAX, not just reworking MCAS?