Why is the Constellation's nose gear so long?

The Lockheed Constellation has an enormously long nose gear, which causes the aircraft to slant appreciably backwards when sitting on the ground:

(Image by Greg and Cindy at Flickr, modified by Cobatfor at Wikimedia Commons.)

(Image by the San Diego Air and Space Museum, via Flickr, via Wikimedia Commons.)

(Image by Robert Togni at Flickr, via JuergenKlueser at Wikimedia Commons. Note that, due to the gigantic nose gear, the fuselage is approximately level, despite the ground sloping downwards considerably towards the aircraft's nose.)

In contrast, other airliners of the era had a much-less-ridiculous nose gear length, like the DC-7:

(Image by Ted Quackenbush at airliners.net, modified by Fæ at Wikimedia Commons.)

(Image by Bill Larkins at Flickr, via Wikimedia Commons.)

Why is the Constellation's nose gear so much longer?

The Connie's fuselage has a subtle S shaped contour which was intended to conform somewhat to the upwash ahead of the wing and downwash aft of the wing, with a final upturn at the end to place the horizontal tail at the desired vertical location. 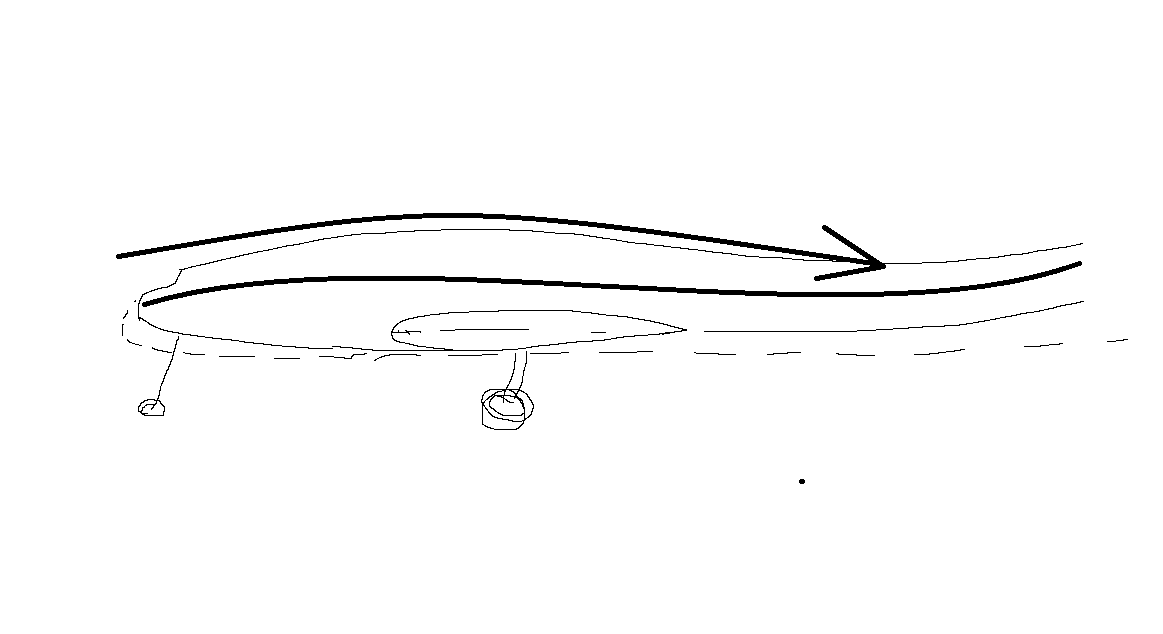 They also tapered the fuselage to the smallest cross sectional area possible at the nose, to part the air gently you might say, so the bottom ends up sloping up toward the nose.

Then you have main gear legs that are fairly long because the R3350's propellers are quite large.

The wing incidence is set to optimize the fuselage curvature's presentation into the airflow in cruise.

At the same time, you want to have wing chord in a certain desirable AOA range sitting on the ground, and you want to keep the tail from sitting too high (the Connie has the 3 surfaces to keep the vertical height of the tail low enough to fit the common hangars of the day).

Combine all those factors together and you end up having to the make the strut really long, and ending up with the most graceful airliner ever designed. 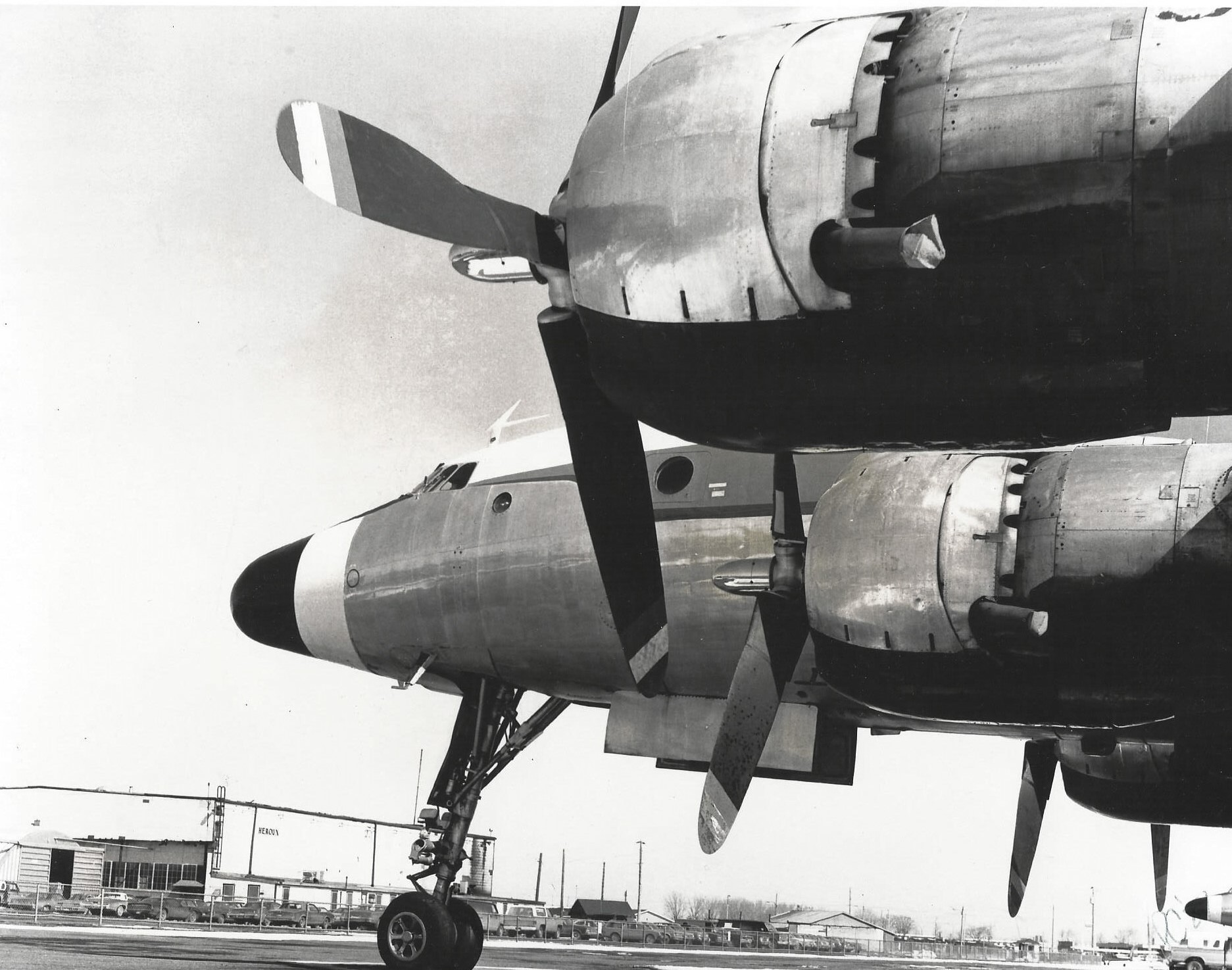 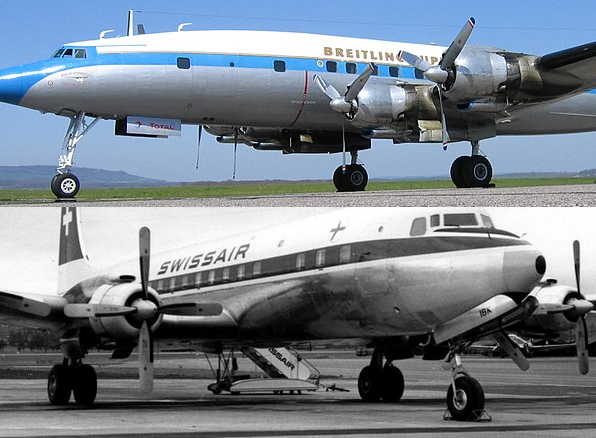 The Connie and DC-7 have the same engine (Wright R-3350), low-wing mounting, and main landing gear configuration (retraction into the inboard cowls).

If you visually remove the nose landing gear (NLG) bay door on the DC-7, it too has a tall NLG.

It's just not as tall because the big difference is the propeller diameters. Lockheed went with three bladed propellers, compared to the DC-7's four bladed propellers, resulting in a difference of 5.5 ft (1.7 m) in diameter (19 ft$^{[1]}$ vs 13.5 ft$^{[2]}$ propellers). The Connie also sat with a higher pitch angle, as evident by the 3-view drawing.

The Stratocruiser on the other hand had a higher wing, and a taller two-level cross section, permitting the short NLG.

The above answers the geometric reason.

As for the design choice, fewer blades are more efficient, albeit bigger. As for the nose pitch on ground, it could mean the wing is attached at a lower angle of incidence, permitting a more level floor in cruise.

You can see that the underside of the Connie's fuselage ahead of the wing root is contoured upwards to begin the taper which ends at the tip of the plane's nose. The other planes had constant-section fuselages ahead of the wing root, in which the nose does not begin to taper down until just aft of the cockpit.

To maintain the same propeller tip ground clearance, the Lockheed design then required a longer nose gear strut because the attach point for the nose wheel was higher in the air.

(In the case of the Douglas aircraft, maintaining a constant fuselage cross-section forward and aft of the wing reduced tooling costs and enabled fuselage stretches in future revisions of the airframe.)

Not the answer you're looking for? Browse other questions tagged landing-gear lockheed-constellation or ask your own question.

27
What are the advantages of more than 4 propeller blades?

40
Why is the Eurofighter's nose gear door shorter than the bay?
5
How can I calculate the force on the nose gear at landing?
7
What is the typical weight distribution ratio between nose gear and main gear?
20
Why is the nose landing gear of a Rutan Vari Eze up during parking?
3
Which is the technically correct term: Nose Gear or Nose Landing Gear?
11
What is this item on the nosewheel of the Sukhoi PAK-FA?
6
Nose gear failure in single prop aircraft: belly landing or nose landing?
11
Why are the Constellation's nosewheels canted inwards?
8
Why does the A330 sit nose-down on the ground?
11
What does shimmy in nose landing gear mean?