Are magnetic compass acceleration errors due to the southern side of the compass being weighted?

When I was in college, I had an instructor who taught me that the acceleration errors in a magnetic compass were due to a counter-weight installed on the south-facing side of the compass that was intended to counter-balance the magnetic dip on the northern side.

It makes sense that this would reduce or prevent north/south-facing turning errors, and would also create acceleration errors while facing east or west.

The thing is, I have never seen this explanation on paper, just that it is "magnetic dip" error. Is it true, and can you find a source that says so, or was my professor wrong?

Some compasses are counterweighted to decrease magnetic dip. Older and/or cheaper compasses for land navigation are this way. Many to most are not weighted, especially in aviation compasses. Weighted compasses would require different compasses for the North and South hemispheres. Instead, aviation wet compasses are built with the low friction mounting point above the CG and magnetic bar. This causes the CG to move to the South polarity end of the compass assembly when the magnetic bar dips downward to the North Pole and to the North polarity end when dipping towards the South Pole. I like this article that explains this phenomenon.

Several decades ago, my unit had the opportunity to train with the Australian 3rd Para Regiment in Australia. Many of us had been using personally owned GI lensatic compasses because the tritium markers worked better than the newer, issued lensatic compasses. We were warned that the older models may not be accurate down under due to them being Northern Hemisphere compasses instead of the universal ones. I did not understand the reasoning for this until many years later.

I do not have any reason to believe that the simple magnetic compass technology has changed significantly in the past 10 years, so it looks like it is true that the north-labeled side of the compass card is indeed heavier than the south-labeled side.

This weight is intended to mitigate the north/south turning errors, but is the cause of the acceleration errors. 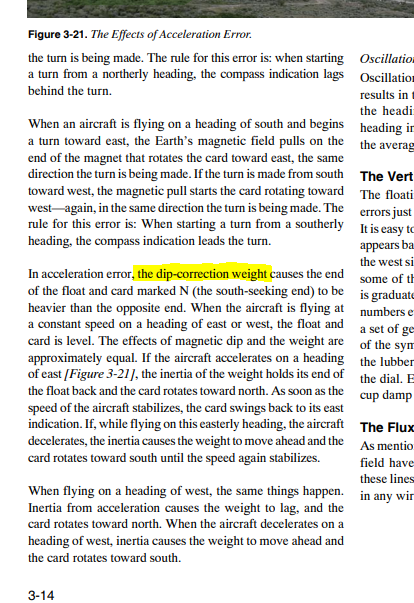 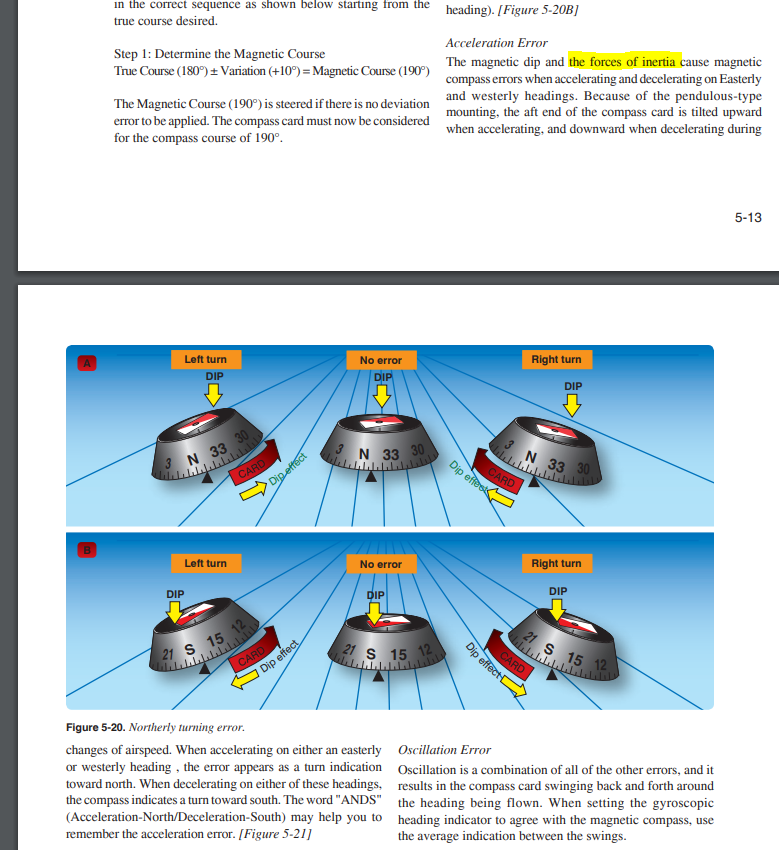 A third, yet less official, source that corroborates this information is here.

Not the answer you're looking for? Browse other questions tagged flight-instruments magnetic-compass or ask your own question.

34
How can pilots fly inside a cloud?