In a spin, are both wings stalled?

I missed a test question which asked that if an airplane was spinning to the left which wing was stalled. The supposed correct answer was that both wings are stalled (I had answered that the left wing only was stalled). However after looking at the this article on Wikipedia it seems to indicate that only one wing needs to be stalled to spin:

In a normal spin, the wing on the inside of the turn stalls while the outside wing remains flying. It is possible for both wings to stall, but the angle of attack of each wing, and consequently its lift and drag, are different. Either situation causes the aircraft to autorotate toward the stalled wing due to its higher drag and loss of lift.

So my question is was it fair for me to have missed that test question since according to Wikipedia a spin can occur with only one wing stalled?

Yes, both are stalled.

I guess a nit-pick is on "what is stalled"? I adopt that you are at or beyond the point that an increase in AOA results in an increase in lift (critical AOA). That's the top of the blue curve in the plot below.

Also, a stalled wing does not mean every point on the wing has unattached flow. It means the wing is operating at an AOA where an increase in AOA results in a decrease in lift.

At low angles of attack (AOA) planes are naturally stable in roll. The downgoing wing sees a higher AOA which results in more lift, and a restoring force. The upgoing wings sees a lower AOA, and less lift, so it is stabilizing too.

At a high AOA, though, you are operating on the backside of the wing lift diagram. In the picture below, this would be at and beyond 20 degrees AOA. 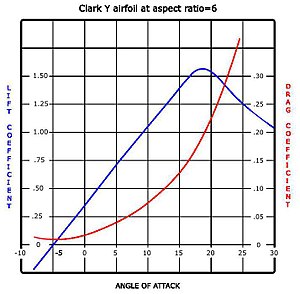 Now, the upgoing wing sees more lift, which leads to positively reinforcing going up. Same but opposite on the downgoing. It sees less lift.

Also, the red line shows drag. That downgoing wing (on inside of the spin) sees a great increase in drag, which will lead to a yaw towards that wing, i.e., pro-spin.

So to get in the situation where a roll/yaw movement is positively reinforcing, you need to be in stalled AOA. You might start with just one wing, you'll get to both.

Here’s a NASA video of a wing with tufts when it is both on the inside of the spin and outside. Stalled in both (but different airflow).

No, one wing has at least partially attached flow. How else would there be a rolling and yawing moment which keeps the spin movement alive?

As a consequence, the outer advancing wing will experience a moderate angle of attack which can even become negative at the tip. Therefore, a sizeable portion of that wing side has attached flow with high lift and low drag. On the other side the angle of attack grows to 90° and beyond, so the wing is fully separated and the aerodynamic force is normal to the wing surface. See below for a diagram of the flow direction: The dark blue vector is from the falling motion and the red vector is the product of the yawing motion $\omega_z$ times the wing station y. Together they combine to the green vector which produces a resulting aerodynamic force R:

On the left is the retarding wing and on the right the advancing wing. Note that the aerodynamic force is in line with the flow vector on the retarding wing with its fully separated flow while the aerodynamic force is normal to the flow vector due to the attached flow on the advancing wing. The difference in the local forces produces a yawing and rolling moment which balances with the damping forces. If there would not be such an asymmetry, the motion would die down quickly.

Even in a flat spin, where the pitch attitude is around 0° (resulting in 90° angle of attack at the center wing), the advancing side of a moderate to high aspect ratio wing produces some nose thrust from partially attached flow. How else would the aircraft keep spinnig? Low aspect ratio designs produce a propelling nose vortex on the forward fuselage which keeps the motion alive.

A spin is an autorotation that requires an asymmetric thrust force to sustain. This requires the wing span to be anchored at one end by drag, with the other end developing enough thrust to overcome the (rather weak) stabilizing force of the vertical fin and drive that end forward, rotating the plane. The AOA is highest at the inboard end and decreases as you move outboard due to the higher forward velocity. At some point along the span, the outer end is unstalled or only semi-stalled and is making at least some amount of lift/thrust.

Not the answer you're looking for? Browse other questions tagged spins faa-knowledge-test or ask your own question.

7
May a Recreational Pilot demonstrate her/his own plane to a prospective buyer?
4
Can you please explain aircraft spin in simple non-mathematical terms?
1
How does the advancing wing in a flat spin create nose thrust?

9
What altitude to fly on a STAR when it reads "expect"?
17
Does it really take 9000 feet to recover from a spin in a P-51 Mustang?
1
How does the advancing wing in a flat spin create nose thrust?
4
Are student pilots required to have spin entry and recovery training?
6
Does a left spin differ from a right spin for a single-engine propeller aircraft, in terms of spin characteristics & ease of recovery?
5
Why don't multiengine aircraft have to demonstrate spin recoverability?
9
Why does spin recovery involve cutting the throttle?
6
Should I use rudder to recover from power-on stalls?
1
What differentiates the entry procedures for spins and snap rolls?