How do conventional missiles fly?

With the exception of cruise missiles, most missiles don't have any obvious lifting device.

If you watch a missile being fired, prior to its rocket firing it does exactly what you'd expect: momentarily plummet toward the earth. And yet the moment it ignites, it stops falling completely, but without any pitch that you'd expect to counteract gravity; even big missiles like the Phoenix or HARM seem to have gravity-defying characteristics.

Missiles that fire on the rail seems to experience no drop at all.

AIM-9M launch from an FA-18F source

There's a good slow-motion video of the firing of an AMRAAM here.

Now this isn't magic, so I presume either a) the little fins make adjustments so that the rocket is, despite appearances, pointing a little downwards or b) the fins are smart enough to configure themselves to provide the lift needed to keep the missile in the air. But it might be neither.

The question is - generally, how do conventional missiles fly?

Air-to-Air guided missiles are little airplanes. If there are only fins at the tail, it's a ballistic rocket, basically a fin stabilized artillery shell accelerated by a rocket motor instead of an explosion in a pipe.

On missile like AMRAAM, Sidewinder, or Sparrow, the vanes are wings and the missile is a rocket powered aircraft that can climb, descend and turn as required. The vanes/wings don't have to be very big because the thing is going superdupersonic. The X plan form means the wings can support and control the missile equally well in any axial position.

The front vanes are movable and do the controlling. It's effectively a rocket powered robot canard aircraft on a suicide mission, really.

Since the missile accelerates to >Mach pretty quickly and operates supersonically, the wings/vanes use a supersonic airfoil profile, either biconvex (like the F-104's airfoil) or a diamond profile. The vanes on the AIM-9M look like biconvex airfoils.

The missile descends when it is first launched because it's going too slowly for its teeny tiny supersonic wings to do enough lifting, and has to accelerate first.

Now, for a change of pace, slow something like an AMRAAM or Sidewinder down to subsonic speed, make the fins bigger and provide control surfaces on the rear ones, power it with a turbojet instead of a rocket except for boosting it into the air, and you have the CL-89 surveillance drone, basically a reconnaissance cruise missile that flies hither and yon at low level taking pictures. 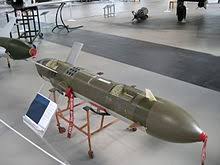 The missile's wings are very large for it's mass, and produce a great deal more lift than the wings of the aircraft firing the missile.

One thing to note from the OP's linked video is that the F-35 and the chase plane are traveling at the same speed, so the F-35 appears stationary. However, that aircraft is likely traveling in excess of 0.8 Mach. Therefore, upon release, the missile is also traveling at 0.8 Mach. The large wings provide plenty of lift. Some missiles may thrust vector as well.

In the video you posted, the missile appears to continue falling even after the motor ignites -- you can see the missile start to overtake the aircraft even as it continues to drop: 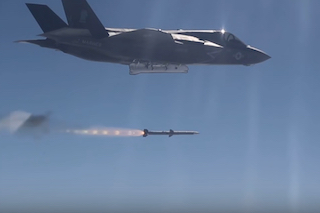 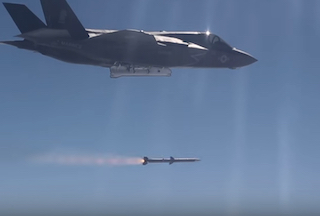 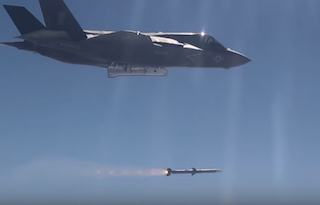 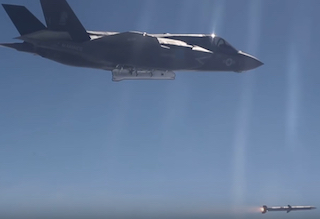 By the last frame, it appears to have taken a slight nose-up attitude to maintain altitude:

Depending on the range and mission of your missile, body lift alone may be enough to keep it aloft.

@dotancohen pointed out that a typical missile's wings are large for its mass, but look at the ASRAAM - it has only small tail fins which are there purely for attitude control, rather like an AIM-9X (which already has much smaller wings than the 9M) but with even fewer lifting surfaces. It's extremely slender to reduce drag, probably with the intent that it should retain as much of its energy (and thus speed) as possible. With enough speed, you'll only need a little AoA for the missile fuselage itself to create sufficient lift. This seems to be a typical strategy for short-range missiles, but the ASRAAM takes it to the extreme.

Missile meant for longer-ranged engagement may employ a lofting profile during the boost phase, opting to use the rocket motor to gain altitude as well, in which case the thrust will directly offset some of the weight of the missile.

Not the answer you're looking for? Browse other questions tagged aerodynamics lift missiles ordnance or ask your own question.

33
How are anti-aircraft missiles tested?
20
Why do heavy bombers not carry air-to-air missiles?
19
How are cruise missiles different from ballistic missiles?
4
Why are some Tomahawk missiles' nose duck-nose shaped?
15
How do missiles steer (mainly air to surface)?
6
How are missiles attached/detached from a combat jet aircraft?
4
How to estimate the time to intercept for homing missiles?
11
Propulsion method for MANPADS missiles