How can lift on a canvas covered airplane wing in level cruising flight be explained without introducing Bernoulli ? Both upper and lower surfaces are bulged out,which indicates lower than ambient static pressure on both surfaces.

I am not sure if I got your question completely. As I am not entirely sure what you mean by leaving out Bernoulli.

Let's start with the lift issue:
Lift is created when the pressure (-forces) on the upper wing surface (suction side) and the pressure (-forces) on the lower surface do not cancel each other out. Usually this means that there is a net-force pointing upward (in level flight). Lift is therefore not directly connected to the ambient pressure. Does this answer the lift part of your question?
Image taken from wikipedia 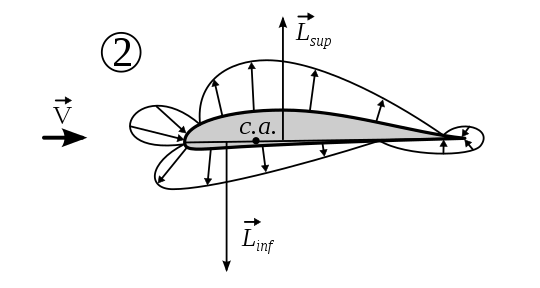 Now let's focus on the bulged out surfaces:
I would guess there are at least two effects:

Your observation is correct. There is suction (= lower than static) pressure on most of the surface area of both sides of a wing. The reason is simple: The wing has a certain thickness and needs to push air aside in order to move through it.

In order to make way for the wing, the air will accelerate when flowing over the wing, so an imaginary parcel of air will be stretched lengthwise, becoming thinner in the process. The suction on both sides of the wing is doing this stretching, because it pulls the oncoming air in. Air is accelerated over the forward part of the wing and decelerated again as the airfoil thins down over its rear portion.

The air inside the wing is sealed by the airtight fabric and has about static pressure (what you would measure with a barometer when at rest). Consequently, the lower air pressure of the accelerated air on the outside allows the air on the inside to push the fabric out.

That lift is created at all is caused by a pressure difference between the convex upper surface and the flatter lower surface. Suction is higher on top than on the bottom.

If you are talking about a fabric-covered wing like that on a Piper Cub, the flow of air over the wing is not what determines the shape of the wing: the fabric is tightly stitched to the ribs, spar(s) and the leading and trailing edges, which themselves are made of solid material. That "skeleton" structure is what gives the wing its shape.

The fabric is also painted with a sealant (commonly called "dope") which makes it impossible for air (or water) to flow through the fabric. This means that any pressure distribution which develops across the outside area of the wing will be transmitted as a force from the fabric to the underlying structure of the wing and ultimately to the main spar as lift.

The "suction" aspect of lift where Bernoulli gets involved is just a small part of it.

Lift is generated by deflecting air down, or more correctly, inducing a large air package above and below the wing to move down. A flat sheet of plywood makes lift. The biconvex supersonic airfoil on an F-104, being more or less a flat sheet of plywood with sharp edges and a bit of surface curvature, makes lift. The completely flat surfaces of almost all fabric covered tails of light aircraft make lift (downward). They all do it by deflecting or inducing air to change direction.

The lift is the action/reaction created by the downwash generated by an airfoil inducing air to move from here to there. A helicopter hovering is not being suspended just by a suction force being created by the low pressure area above the blades. It's being suspended by a the mass of air being accelerated down by the rotor's moving wings. Not much different from a hovering rocket.

The airfoil shape just makes the wing do a much more efficient job than a flat sheet of inducing air to move down because of the pressure distribution. A flat sheet redirects mostly the air below to move down and just a little bit of the air above. An airfoil is able to influence a large package of air above to move down as well. The low pressure region is creating a bit of a suction effect that acts upward directly on the wing, but at the same time while it is sucking the airfoil up, it is also sucking some of the air package above it down, and the downward induced movement of the total air package is the bulk of the lifting force.

58
How do wings generate lift?
45
How complete is our understanding of lift?

30
Principle of aerodynamic lift: are misconceptions also taught in flight schools?
4
How should the pressure coefficient distribution from a wind tunnel experiment be interpreted?
3
How to read representations of pressure around an airfoil?
3
Is flow turning different from the Magnus Effect? If so, how?
14
Why does a stall decrease lift, rather than increasing it?
3
How does Bernoulli's principle contribute in lifting airplane?
2
Aerodynamics moment of a wing
1
Aerodynamics and fuel consumption of a powered glider
2
How to distinguish the induced drag of a lift-producing wing from its pressure drag?