How do you disable plane AI when the plane goes crazy? [duplicate]

This came to my mind when I learned 737 MAX crash was caused by the AOA indicators giving faulty info to the AI which crashed the plane.

So how do you completely disable the flight computer when it starts to control the plane but putting pressure on yoke or forcing the trim wheels dont solve anything? How do you remove the circuit breakers on a Boeing or a Airbus?

Altough this question seems like just another override the AI question. What I really want to know is how do I COMPLETELY disable the flight AI. It caused accidents when it happened in test flights but Id like to take a risk.

TLDR: you follow the appropriate checklist for your aircraft. 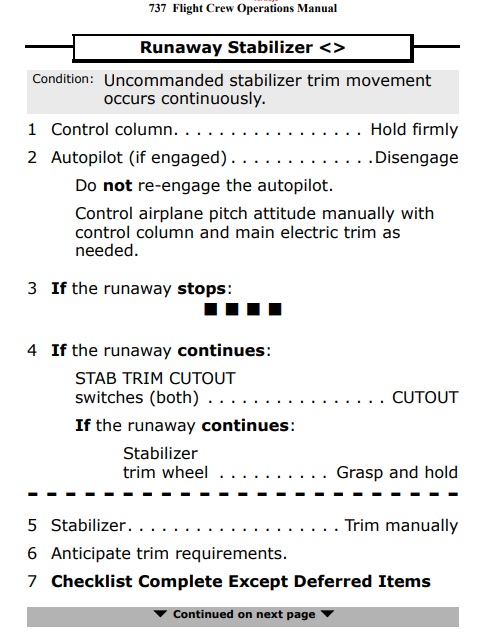 How do you disable plane AI

There is no Artifical Intelligence (AI) in passenger transport aircraft.

Colloquially, the term "artificial intelligence" is used to describe machines that mimic "cognitive" functions that humans associate with other human minds, such as "learning" and "problem solving"

So far as I know, avionics systems pretty much have to follow a rigorously tested and designed but fairly traditional style of imperative and deterministic programming that does not involve the kinds of techniques that computer scientists might associate with AI, such as knowledge-based-systems, rule-based systems, fuzzy-logic, inference engines, etc.

There have been two crashes in which MCAS (not AI) is thought to have played a part. After the first crash, but before the second, the FAA issued an Airworthiness Directive (AD) that specified what action to take in the case of "uncommanded nose-down inputs".

Runaway Stabilizer
In the event of an uncommanded horizontal stabilizer trim movement, combined with any of the following potential effects or indications resulting from an erroneous Angle of Attack (AOA) input, the flight crew must comply with the Runaway Stabilizer procedure in the Operating Procedures chapter of this manual:

It may be that the pilots in the second incident did not follow the revised checklist for this situation, or were not able to for some reason. More recent information suggests that following the runaway stabilizer checklist can disable MCAS but also disables the ability to adjust trim "manually" using the thumbswitches on the control column. At some point there was a change in the wiring/operation of the two STAB TRIM CUTOUT switches so that both have the same effect rather than being able to selectively disable automatic trim while retaining the operation of the thumbswitches. This only leaves manual operation of the trim wheels - which can require a lot of strength in some circumstances.

The faulty AoA sensor and the actions of MCAS may have contributed to the accidents but there are other causative factors that need to be understood by anyone dealing with this situation. Battle over blame, BBC

Note that Boeing will now fit AoA disagreement indicators to 737s. I believe they also have issued MCAS revisions.

how do you completely disable the flight computer

There isn't one computer.

Modern passenger transport aircraft are very complex, there are many breakers, in multiple locations. Some of those locations are sometimes not in the cockpit.

It isn't possible to give, in this Q&A website, a complete list of all breaker locations for all passenger transport aircraft currently in service.

It caused accidents when it happened in test flights but Id like to take a risk.

People who like to take risks do not (or should not) pilot passenger transport aircraft like the 737.

Not the answer you're looking for? Browse other questions tagged flight-controls circuit-breaker or ask your own question.

48
What is the technique or procedure to disable/disengage the MCAS on Boeing 737 Max 8 & 9 Aircraft?

5
How do you check the correct operation of the rudder when it's tied to the nose wheel?
11
Can a software “hard freeze” or serious hardware problem completely disable the whole cockpit?
14
How could a failed left wing cause a roll to the right?
12
Why do aircraft have a crossover airspeed, and why does it increase at higher vertical load factors?
2
What happens when you apply full cyclic + collective?
5
On a modern Aircraft like the A320 or B737, is it possible to disable computer interference with the control inputs of the pilots?
0
Does the AP disengage if the plane is upset and how would the flight controls react if not being held?
5
Why is the 707’s yaw-damper-out lateral controllability marginal to nonexistent with flaps and spoilers extended?
2
Helicopter flight: Does the rotor disc plane and hub plane rotate along axis perpendicular to rotational axis?