Why would the outer tanks fuel on the A320 be colder than the inner tanks?

However in the FCOM it's mentioned in a note if the outer tanks are full, fuel spills over into the inner tank, does this mean that the warm fuel is now going directly into the inner tanks? Also can any other variables play a factor like fuel temperature on ground?

Some explanation is needed wrt the circulation function on the A320. Excerpts below will be denoted (M) and (F), for maintenance and flight manuals, respectively.

The FADEC controls the fuel return valve.
If the outer tank is already full, the fuel overflows to the inner tank through a spill pipe. On ground, the fuel recirculation is not inhibited if there is an overflow in the surge tanks. (F)

The main takeaway from this is the first line. The fuel isn't always returned. The return is managed by the engine's FADEC, not the fuel system. The second thing is that the circulation also works on ground.

The function of the circulation is cooling the IDG, not warming the fuel. But the fuel is indeed warmed due to the process, but the engine fuel system mixes that warm fuel (inside the fuel IDG cooling system) with fresh supply of cold fuel, to be used again by the engine (combustion) and for the IDG cooling.

The FADEC only returns the fuel to the outer tank in 1 condition, and it does that by opening the FRV (fuel return valve). That condition:

The return valve opens at low engine fuel flow if the engine oil temperature is above 93°C (199°F). (M)

Low engine FF (e.g., idle) will not be encountered in cruise. Because of the low FF, there is no high demand for the warm fuel (inside the fuel IDG cooling system), i.e., the engine is not using it quickly for combustion. And it will only keep getting warmer. So the FADEC mixes it with fresh fuel, and reintroduces it to the outer tank (schematic below). The mixing ensures it will be reintroduced at less than 100°C.

The return valve mixes the hot fuel with cold fuel from the LP pump to maintain the temperature of the returned fuel below 100°C (212°F). (M)

This means, for example, if the plane is sitting on the ground with the engines running for too long, the outer tanks will become warmer than the inner tanks.

In cruise, because the outer wing is thinner, the surface area to volume ratio is higher than the inner wing, and thus the fuel will lose temperature faster than the inner tanks. This is highlighted in Airbus' FAST magazine issue 36: 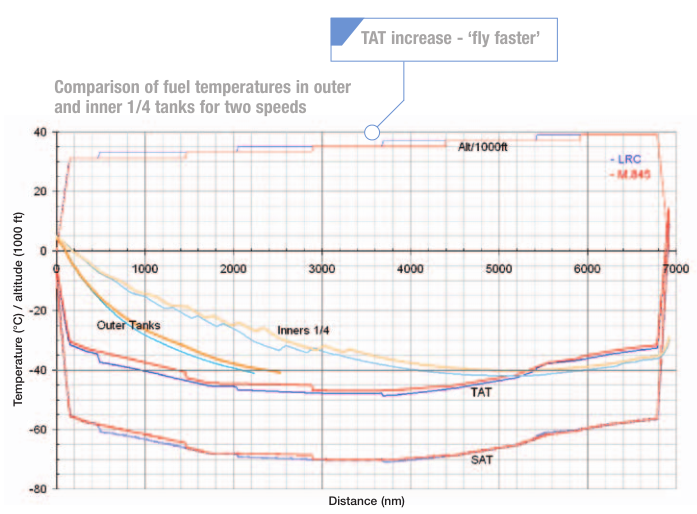 As you can see, the outer tanks cool down at a faster rate. Note: the magazine discusses the long-range operation of the A340, which unlike the A320, does have a fuel transfer procedure when a LO TEMP message is shown.

And below is the A320 IDG cooling schematic. Close the FRV, and you'll see how the fuel is mixed and reused by the engine: 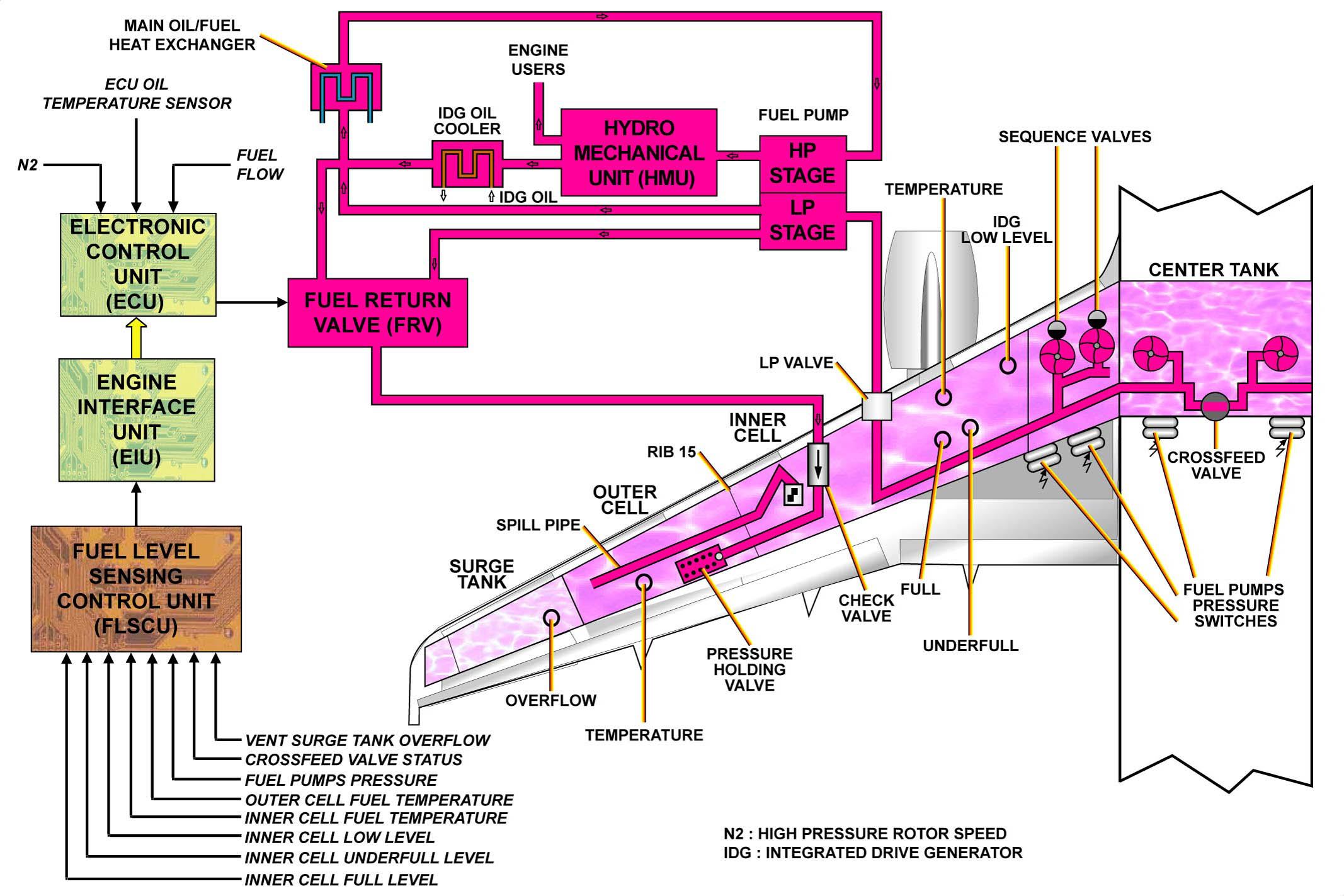 The above explains why when the crew gets a confirmed FUEL L (R) OUTER (INNER) TK HI TEMP warning, the actions could be:

All this would reduce the hot fuel being fed back into the affected tank.

A slightly more detailed operation of the FRV is found in the engine technical training manual (CFM56):

The purpose of the Fuel Return Valve (FRV) is to bypass warm fuel from the Hydromechanical Unit (HMU) to maintain the efficiency of the Integrated Drive Generator (IDG) Oil Cooler and engine oil/fuel heat exchanger.

Consequently this prevents engine and IDG oil over temperature.

The ECU control logic of the FRV is mainly based on the engine oil temperature.

Above a certain engine oil temperature, the ECU orders a low fuel flow return to the A/C fuel tanks.

When the engine oil temperature increases, the ECU orders a high fuel flow return to the A/C fuel tanks.

6
Why are the 737's variable-speed generator drives so unreliable?

72
Why are fuel tanks in the wings filled first, and why are they used last?
26
Why are the center tank pumps deactivated when slats are extended on the A320?
4
Where is the APU fuel pump on the A320?
23
Is there a tank priority sequence for using the fuel tanks?
53
Why are fuel tanks located in wings?
5
How much unusable fuel is in the A320?
8
How can the fuel decrease evenly from both wing tanks when an A320 is running on APU only?
17
Why aren't "fuel polishing" systems removing water & ice from fuel in aircraft, like in cruising yachts?
6
How does a fuel density sensor work? (densitometer, cadensicon)