Did the DC-9 ever use RATO in revenue service?

While reading the NTSB report on the crash of ALM Flight 980, I came across this interesting tidbit:

... The fuel charts used for the study made allowance for a higher consumption rate than the standard DC-9-30 series aircraft. This was the result of a fuel audit by the Douglas Aircraft Company on ONA aircraft and was due to jet assisted takeoff fairings installed on those aircraft. [Pages 7-8 of the paper report; pages 12-13 of the PDF file of the report. ONA = Overseas National Airways, who operated the flight on behalf of ALM. Emphasis added.]

Did these DC-9s ever actually use RATO during revenue operations?

The JATO/RATO retrofits were used only by Overseas National (later National Airways) when operating out of hot/high airfields for military contracts. They were never used as passenger flights, but you could say that these were "revenue" flights as they were done for monetary compensation.

I can't find any history on ALM980, only that it was registered as N935F and operated by Overseas National as a passenger flight. N935F does not show any history in the FAA registry other than it being reserved. It is possible that this was a converted cargo aircraft.

Here is a picture of an Overseas National flight using the JATO rockets: 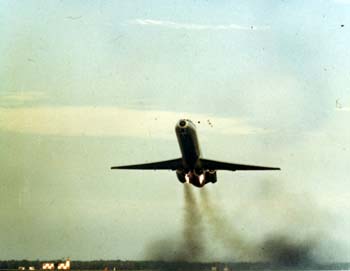 It should be noted that the DC9 was not the only passenger type aircraft to get the "JATO" treatment. Boeing modified the 727 to operate out of short fields by adding JATO rockets. Aviation Week did an article featuring the DC-9 JATO modifications: 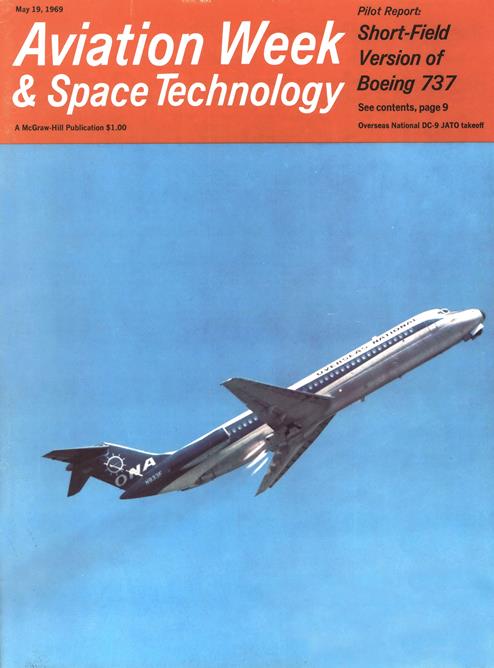 The magazine cover linked above shows a DC-9 take-off (an Overseas National flight).

Not the answer you're looking for? Browse other questions tagged dc-9-family rato or ask your own question.

8
RATO used to get civilian aircraft out of airports with inadequate runway length?

20
What is the procedure for a rejected Jet/Rocket Assisted Takeoff (J/RATO)?
3
Why do the DC-9’s three-phase electrical systems use separate, unconnected breakers for each phase?
1
Why does the DC-9's antiskid system have to be manually disarmed during landing rollout following a ground-shift-mechanism malfunction on takeoff?
5
Does the MD-90 use a different elevator system from the other DC-9 versions?
18
Why is the DC-9-80 (“MD-80”) prohibited from taking off with a flap setting between 13 and 15 degrees?