For airliners, what prevents wing strikes on landing in bad weather?

For any low-wing aircraft, particularly the MD-80 or some of the private jets, CRJ's, the wings appear about 5ft or less above the ground. It seems that just few degrees of roll before touchdown would cause a wing strike on the runway and a disaster.

How do pilots and aircraft manufacturers avoid this ? It seems like with the thousands of daily flights - in all sorts of inclement weather conditions - this (fortunately) isn't a problem. (I'm not saying it's never happened, just that it seems exceptionally rare.)

So my question is, why isn't this a serious problem? I would expect turburlence and wind gusts to do all sorts of unpleasant things to aircraft, one of which might be disrupting the roll a couple degrees and planting the wingtip into the runway. What steps do pilots and aircraft designers take to mitigate this?

It's not how high the wing is off the ground, but the angle between the main landing gear when compressed and the tip of the wing, which with the wing dihedral makes it even higher off the ground – on the MD-80 that's 2.6 m (8'7"). This will be the roll angle limit.

It's for that reason, unlike smaller high-wing general aviation planes, big jet-liners don't decrab as much in a crosswind landing, whereas decrabbing (going one-wing-low) would be a problem. From an MD-80 flight manual:

On final approach, establish a crab angle into the wind to hold the aircraft on the extended centerline of the runway. Maintain the crab angle until just before touchdown, then use the rudder to align the aircraft with the runway. The touchdown is made with cross-controls as necessary to track straight down the runway. Keep wings as level as possible as the wingtip will touch at an 8° bank angle. Do not hold off downwind wheels; prompt and firm runway contact will greatly assist in rollout stabilization.

So the prevention is respecting the limits, good training, and knowing when the weather is too gusty to just abort the landing.

It does remain a concern though. Wikipedia has an article on it, and the issue would also affect the engine when wing mounted, but with the engine typically forward of the wing, it's given better clearance when the nose is still higher for flaring. The A320 accident mentioned on Wikipedia seems to have been the result of both pilots controlling the plane during landing. 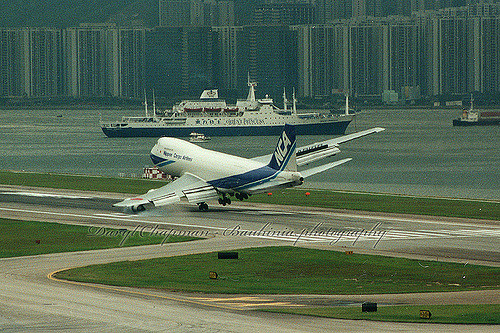 On heavies, as ymb1's answer shows, the wings level crab and kick method (basically air-skidding into the touchdown) is used because the mass of the airplane means you don't have the roll rate necessary to screw around safely with the wing tips close to the surface. On the other hand, the mass gives a good delay between initiating the skid into the crosswind and the airplane starting to drift laterally (because you are in effect in a skidding turn and eventually you will start turning, which is perceived as a downwind drift) so it favours this technique.

On lighter jets like Regionals and corporate, you use light aircraft side slip technique, wing down with rudder to align with the runway. On the CRJ IIRC, you have about 8-10 degrees of roll available before wingtip contact, which is actually quite a bit. Side slipping to correct for a crosswind when you are at 125-135 kt rarely requires more than, say, 5 degrees of bank.

If a crosswind is strong enough to require more than 5 degrees, you usually end up touching down with a bit of crab in, or you may use an extra shot of rudder to kick it straight without lowering the wing any more, and lower the nose more aggressively to plant the plane right away before it starts to drift because you have more rudder than necessary for the bank (and live with a firm touchdown).

That being said, on the CRJ fleet there are usually several wing tip strikes a year during crosswind landings in gusty conditions, where a gust dropped the wing more than expected. The result is usually just a bit of wing tip road rash. Winglet repair schemes are a recurring event at the OEM's support organization.

25
On crosswind landings, is it preferable to side slip or crab on final approach?

13
Do the engines still spool up when reverse thrust is selected, but the reversers are not deployed?
17
Do large airliners have a short-field landing technique?
8
Is there anything wrong with this more symmetric aircraft design, and why isn't it used?
2
Is flying bad for your health?
23
In WW2, were self-sealing fuel tanks really cost-beneficial?
7
Are taller landing gear bad for aircraft, particulary large airliners?
4
Was the Horten Ho 229 flying wing a three-point-landing aircraft?
8
What was in the noses of airliners before the weather radar?