Why does wing bending cause wingtip twisting?

When aft swept wings bend/flex, the outer wing is twisted leading edge (LE) down (this reduces wave drag), the reverse (LE up) is true for forward swept wings.

I've searched the site and googled it, but I wasn't able to arrive at an explanation (Wikipedia also remarks on the fact, but does not explain the causes).

I would say it's because the twist in question relates to Mean Aerodynamic Chord, which is always aligned with the longitudinal axis and airflow, and diverges from the airfoil chord line when the wing is swept (it becomes a truncated slice you might say).

Assume a wing that can bend along its spar axis but that has perfect torsional stiffness for our purposes. When a straight wing is bent up, the incidence of the MAC at any given point, being perpendicular to the bending axis and the same as the airfoil chord, remains the same from root to tip.

On a swept wing that is bent up, the airfoil chord line, perpendicular to the span wise center line (B), also remains untwisted along its bending axis (in our perfectly torsionally stiff wing), but the MAC, which is now different from the airfoil chord line because it's aligned with the longitudinal axis (A), sees a geometric reduction in incidence in proportion to the bend. 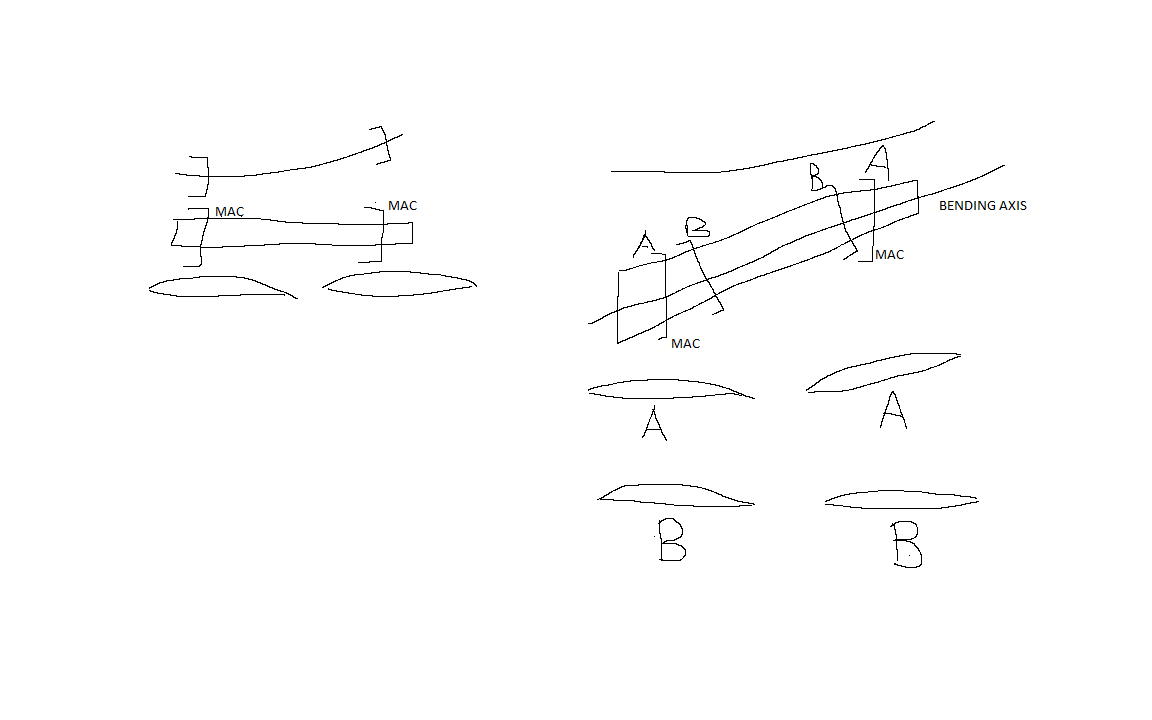 @JohnK's answer is spot on. I would like to add a diagram from a paper I found (the missing search keyword was 'spar'), and share a way that made it easy for me to visualize:

The paper's explanation and diagram:

Structurally, it is convenient to consider the bending moment about an axis perpendicular to the elastic axis (spar locus) whilst the local angles of attack (incidences) are measured with respect to the free flow direction [5]. In the case of applying pure up-bending load on an aft-swept wing, a decrease of the local wing incidence is produced due to the differences in the elastic vertical displacements at the leading and trailing edges as shown in Figure 1. This influence is reversed in the case of down bending of the wing, leading to an increase in the effective incidence. Therefore, the elastic twist of the wing under flight condition will be a part of the elastic twist and the bending deflection [6, 7]. 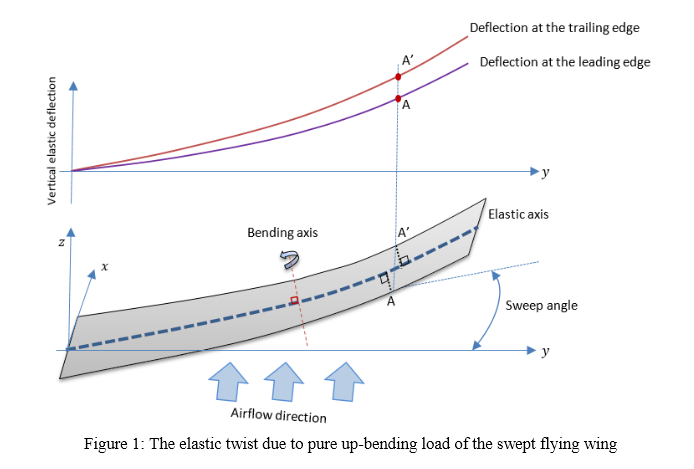 — The Influence of Spar Location on the Elastic Deformation and the Weight Estimation of a Swept-back, High Altitude, Solar Powered Flying Wing UAV

In short, for aft swept wings, the upward bending of the spar, which is not perpendicular to the airflow, results in the trailing edge deflecting higher than the leading edge.

A way to visualize it:

Bending a rectangular piece of paper in the same way (not perpendicular to the viewing angle) shows how the trailing edge ends up higher:

8
Where is the spanwise flow? How does the span wise flow point the air towards the wingtip?
4
Does wing sweep affect the direction of lift?
3
Why would lift coefficent change with weight on swept-wing aircraft?
15
Why do some airplanes have simultaneously a straight wing and a swept horizontal stabilizer?
2
Why does the effective alpha/CL increase at wingtip of swept wing?
0
How does gust affect a swept wing
6
Does an increase in lift always cause an increase in lift-induced drag?
2
How does a variable-sweep-wing aircraft keep wing-mounted payloads straight?
0
How does one calculate the Mean Geometric Chord in extended Trapezoid Wing?