Why not separate out the two definitions of V-1 into two separate Vspeeds?

These two speeds are only the same if the aircraft is operating at the absolute maximum allowable weight for that particular takeoff; if the aircraft is lighter than the maximum allowable takeoff weight,2 the first speed (the minimum “go” speed) is slower than the second speed (the maximum “stop” speed),3 forming a range of possible V1s, and the pilot(s) get to choose whatever V1 they want from within this range.

Instead, why not separate out the two definitions into two separate Vspeeds; for instance:

V0: The minimum speed during takeoff at which, in the event of the sudden failure of a single engine, the takeoff can be continued and safe obstacle clearance guaranteed during climbout.

V1: The maximum speed during takeoff at which a rejected takeoff can be initiated and the aircraft brought to a stop on the paved surface of the runway without the use of reverse thrust.

With the current system, there is a variable length of time before V1 during which it is already possible to safely continue following a minor to moderate failure rather than attempting a risky near-V1 RTO, and/or a variable length of time after V1 during which it is still possible to reject without overrunning should a serious failure occur, but neither the minimum “go” speed nor the maximum “stop” speed is ever called (unless the pilots happened to select one of those specific speeds as the V1 for this particular takeoff), thus potentially forcing the pilots to reject when it would be safer to continue, or to continue when it would be safer to reject.

In contrast, if the minimum “go” speed (“V0”) and the maximum “stop” speed (“new V1”) are both called, and called separately, then the pilots would know for sure both when it first becomes possible to safely continue the takeoff, and, also, when it stops being possible to reject the takeoff without overrunning the runway. This would allow the takeoff to be separated into three distinct phases, rather than two:

So why aren’t the minimum “go” speed and the maximum “stop” speed split into two distinct speeds, called out separately during takeoff?

1: For this reason, V1 is generally taken as the speed beyond which one should not attempt to reject a takeoff if the aircraft is still flyable.

2: The maximum weight at which the aircraft can take off from that runway with that performance under those atmospheric conditions and still be assured, throughout the takeoff, of the ability, in the event of a single engine failure, to reject the takeoff without overrunning the runway, to continue the takeoff without striking or coming dangerously close to objects off the end of the runway, or both. Not to be confused with the maximum takeoff weight, which is the absolute maximum weight at which the aircraft, assuming a perfectly dry, 0C atmosphere and a frictionless runway of infinite length, is physically capable of lifting off and maintaining flight should one engine fail.

3: If the aircraft were heavier than the maximum allowable takeoff weight, there would be a section of the takeoff during which, in the event of a single engine failure, the aircraft would be incapable of continuing the takeoff and maintaining obstacle clearance, yet already moving too fast to stop on the remaining runway - in short, neither a safe continued takeoff nor a safe rejected takeoff would be possible. Which is why a) that weight is the maximum allowable takeoff weight, and b) it’s illegal to knowingly take off overweight.

This is exactly how it is done. The "$V_0$" can be 80 knots, 100 knots, or whatever the airplane-specific procedures call for, below is an example for the Airbus A320: 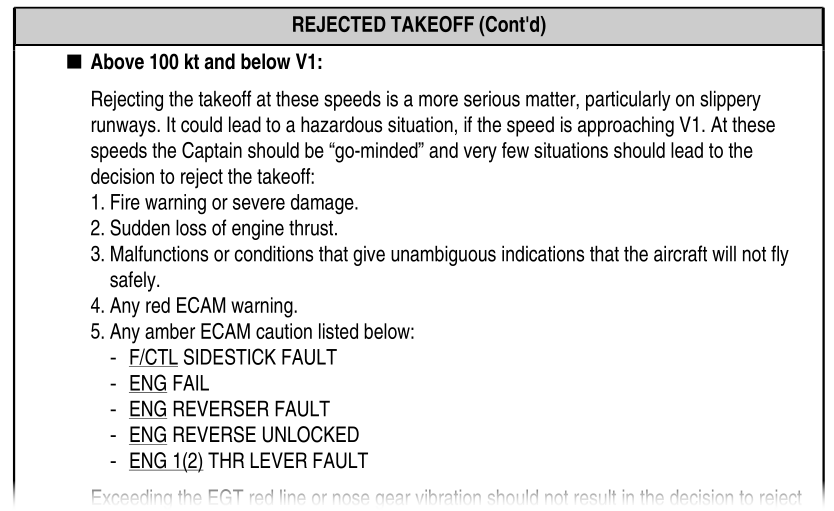 Although you haven't proposed it, it should be noted that an early "go" after an engine failure would result in not having a sufficient screen height at the end of the runway, more so with twin-jets (see below). 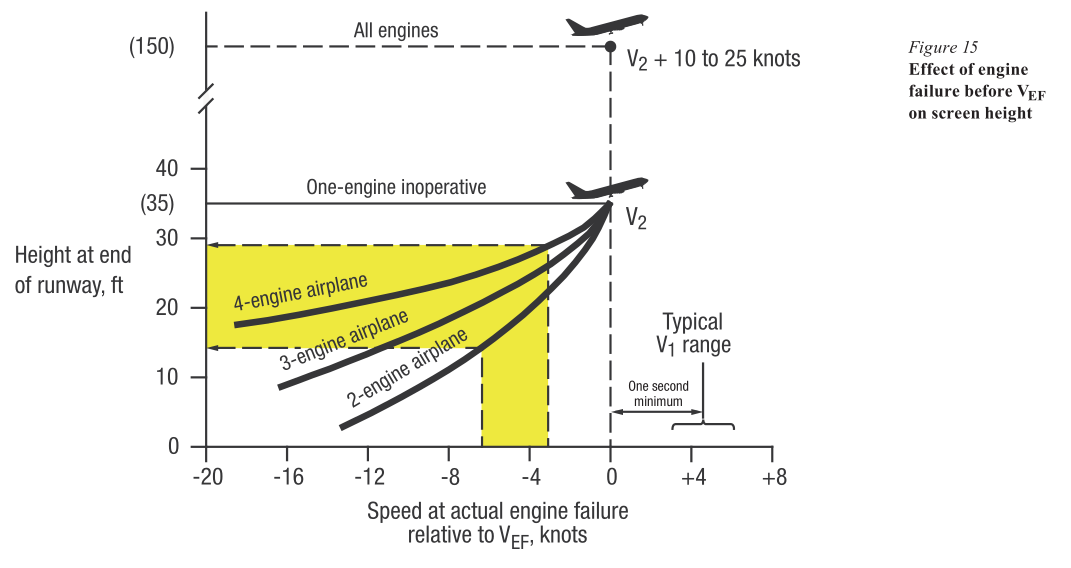 9
During a takeoff emergency, is it safer to abort or continue the takeoff if either can be done within the available runway?
16
How is minimum runway length related to V1?
20
Why is the takeoff decision point based only on speed and not time or distance?
2
Is reducing V1 a viable option for pilots when the ASDA is shorter than the ASDR?
1
Why should a Piper Seneca not take off after an engine failure below 100MPH?
5
Why don’t aircraft use run-flat tyres?
3
Do any aircraft automatically test that the pitot-static system is functioning properly before liftoff?
4
Are there any aircraft where minimum-V1 is limited by Vmcg?
3
Takeoff distances published in OEM manuals