How do balloon pilots avoid birdstrikes?

Balloons, by their very nature, are at the mercy of the wind, and can’t maneuver out of the way of other objects except by (very slowly) climbing or descending. For this reason, mid-air collisions are fairly common whenever and wherever large numbers of balloons occupy small volumes of airspace (especially because this inability to take evasive action essentially restricts most balloons to uncontrolled airspace, which, in most places, is a very small layer immediately above the ground); fortunately, as balloons are very slow1 and very soft, balloon-balloon MACs are, generally, completely harmless (except in the extremely rare cases where a balloon rises into the basket of a balloon above it and gets its envelope ripped open).

Birds, on the other hand, are not necessarily at the mercy of the wind, are largely concentrated at the low altitudes where most balloons operate, are far more numerous than balloons (which is probably still the case even in the middle of a balloon gathering), and tend to come with a lot of inconsiderate pointy bits (beak, claws, probably other things too). Unlike with heavier-than-air aircraft, where a birdstrike usually just means a few dents, or, at worst, some unscheduled engine maintenance (although, as always, there are exceptions), a balloon could, if hit by a bird, easily suffer a catastrophic envelope rupture, followed quickly by (at best) a hard forced landing, or (at worst) rapid unscheduled lithobraking.2

How do balloons and birds avoid each other?

2: Like the chapter in The Twenty-One Balloons where the protagonist’s houseballoon is punctured by a seagull, and he has to make a forced landing on a beach.

The airspeed of a hot air balloon is always... zero. So it's completely up to the bird to do the avoiding. Which shouldn't be too difficult for the bird, on account of this humongous giant brightly coloured monster thing floating in its way. Ya gotta be a pretty dumb or drunk bird to run into one.

I've got over 100 hours in balloons, crewed for around 200 more flights and used to work at a hot air balloon MRO. I have never noticed or heard of a bird strike or seen any damage from one. I have had multiple mid-air collisions with other balloons. Have seen a balloon with bullet holes (from someone who thought it would pop) and many other tears and rips.

Hot air balloons are made of ripstop nylon and are not pressurized, they do not pop like latex balloons and can handle some pretty extensive damage and still fly. The ripstop fabric has strong reinforcement threads woven into it in a diamond pattern, this helps prevents rips/tear from propagating once the tear hits a reinforcement thread.

Balloons are made from many panels of ripstop (see figure below). These panels are sewn together using a French Fell seam (the same stitch that is used on the inside seam of jeans). If a rip does run the full length of the panel, it will almost always be stopped by the seam and will not transition to the next panel, just like cracks in riveted aircraft skin rarely jump to the next panel. 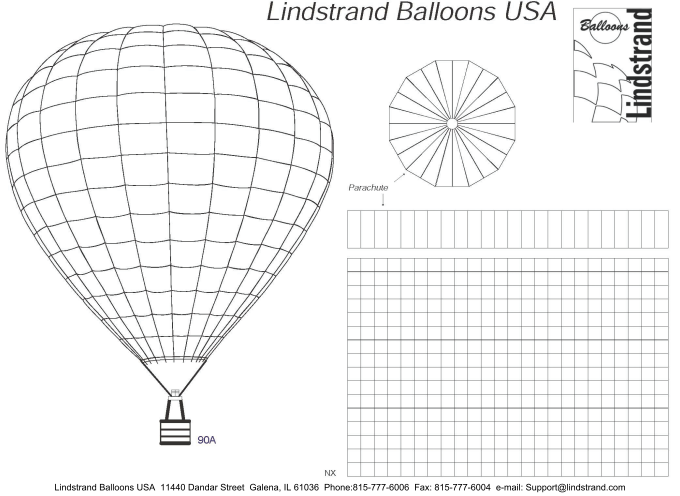 Running on top of every vertical seam, and many of the horizontal seams is a thick nylon webbing called Load Tape. This load tape is what actually carries the majority of the structural loads of the balloon. Due to the strength of the load tape, it is very hard to tear, and provides strain control for the envelope, which would further prevent any rip from running past a seam with load tape.

A balloon will also not deflate or lose altitude from a hole any bird could put into it. When the burner runs, not only do you add the burner exhaust into envelope, but you also heat the air around the flame and cause it to flow into the envelope. A good way of visualizing this is to watch a balloon "standing up," although a fan is used to put air in the envelope, it is often less than half full when the pilot starts the burner to stand it up, the rest of the air is provided by the burners exhaust and the flow of hot air into the envelope. To put in to perspective how big a hole would have to be to affect a balloon, the parachute vent valve at the top of an average size (90,000 cubic feet) balloon is about 35 feet in diameter and can be pulled down several feet in flight in order to descend (and it doesn't cause you to fall out of the sky).

Of course there are limits to how large holes and tears can be before you take off, but there isn't much risk of a bird tearing a large enough hole to prevent continued safe flight and landing. And of course, a bird is more likely to land on the balloon than fly into one.

First off balloons dont very gently ascend or descend, as a fixed wing pilot you need to understand never fly directly above a balloon, our rate of ascent is multiple times yours 1000fpm not a problem, easy and is the normal reaction from a pilot in trouble above a certain altitude (few dozen/hundred feet), so dont try to out climb us, we will all be in trouble. go around.

we go the speed of the wind, while birds do fly into my picture window of my house, because it sometimes looks like it isnt there and they want to land in my living room. they dont often fly into brick buildings just for fun nor will they fly into a massive balloon that is going really slow compared to them.

you dont launch unless the winds are favorable, ideally under 10 mph on the ground and that speed or less during the flight as you often fly in the morning and upper winds drop so while you can get up to 20+knots that is still slow compared to a bird.

If the bird cant see the 2/3 story building in front of them even the largest bird is not going to cause a serious problem. the are likely to bounce off the fabric not go through it, if they go through the hole wont be that big, as answered it is not pressurized like a helium latex balloon, the whole thing is leaking air (very tiny amounts but non-zero) unless brand new and even then...its not like a tv show I saw where a small 1 inch hole near the throat needed macgyver to climb up and fix it. that is just silly. by the through you are legal to fly with small holes at above the equator the rules change but it is per manufacturer. you can technically fly with a big rip in the side, being rip stop nylon it doesnt increase unless the fabric is in bad shape which means you didnt pass inspection which means you are not flying so that is not a problem.

I had heard of an RC plane intentionally fly into a balloon because they were tired of balloons flying over their field on the weekends, not realizing this is a federal offense, the biggest problem for the pilot was a plane falling down through the throat with the prop spinning and not getting injured from that. Same would be for a bird if it were even remotely possible to break through, I cant think of a bird that is that fast, narrow with that sharp of a pointed beak that could even attempt such a thing and would have to do it intentionally. I dont think a hummingbird has the mass to get through. anyway if that were to happen then the next concern is the bird trying to get out through the throat. the hole in the balloon would not be too much of a concern, could still land the balloon, etc just couldnt fly again until repaired.

never heard of a bird strike, would have to be a pretty dumb bird, and likely would just bounce off, if it were to penetrate likely would be only the beak to the face, then the bird would wiggle out, that hole would not be a concern other than found during pre-flight and not get to fly or found during annual inspection and require a repair.

re-reading your question it is very uncommon for mid air collisions even during events like fiesta, but that depends on your definition, because of how close quarters have gotten, four balloons per square at fiesta or more, you rub against others all the time and rub on the way out, sometimes basket to envelope, but usually that is a pilot mistake. You are most likely to see a balloon to balloon collision at fiesta in the air specifically but not at other rallies as others only have one wave/row of launches not three like fiesta. Once aloft mid air is very very very rare even at fiesta as you cant steer your way into one.

Your assumptions in general about balloons seem to be off. Rate of climb, number of mid air collisions at rallies, etc...

Birds are not a concern.

Other balloons are not a concern. Any more than other planes are an airport to a fixed wing pilot. Everyone follows the rules/procedures there are no issues.

Not the answer you're looking for? Browse other questions tagged balloon bird-strike birds or ask your own question.