Why are there no RNAV (ILS) approaches?

While studying the PBN (FAA Order 8260.58A) and TERPS (FAA order 8260.3D) documents, I still have some trouble figuring part of the logic behind the naming and definitions of the published IAP Charts. Specifically, I still have not figured out which Lateral Navigation System is combined with which Landing System (if this is how it's done in practice). Take the following examples:

My confusion can be described, in short, as follows: because I have seen RNAV (GPS) procedures being combined with LPV or LNAV/VNAV, which are Landing Systems, and ILS is also a landing system, I thought that the general idea is that Lateral Navigation Systems are combined with Landing Systems when designing IAP procedures. Is this correct? If yes, where can I find the possible combinations. If no, then what is the logic behind this, what am I missing?

You are confusing some terminology. RNAV (GPS) approaches can have several different sets of minima.

It has: LPV LNAV/VNAV LNAV sets of minima. 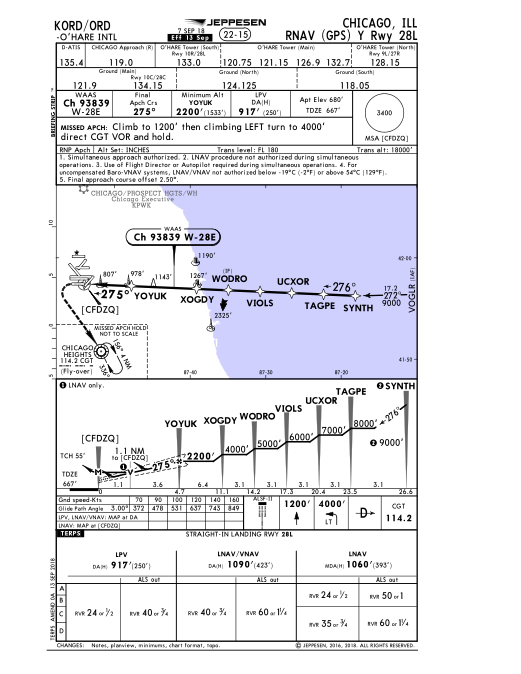 LPV is an instrument approach procedure (IAP) with localizer-type precision and with vertical guidance, (hence the name LPV), provides a pilot with a "ILS-style" approach complete with a decision altitude (DA) but using GNSS equipment instead of VHF equipment like that used for an ILS. Usually the lowest weather minimum of the 3.

LNAV/VNAV is another line of minima with baro-aided (altimeter-based) vertical guidance including a DA but the weather minimum is usually a bit higher than LPV.

Note: There might be a rare exception to this as described in appendix C of FAA Order 8260.58A CHG 2: If the aircraft/aircrew/airline are performance-based-nav (PBN) capable & authorized there could be an IAP constructed with a radius-to-fix intermediate segment leading to an ILS final segment, whereby, the crew would navigate with GNSS equipment on the RF segment and then transition to ILS equipment for the final segment. I would say in my experience this type of approach construction from the US TERPS is very rare.

I will add that WAAS is to LPV as GBAS is to GLS. GLS is only available at 2 airports in the US, while RNAV approaches with LPV minimums are available at a great many US airports, adding a "ILS-like" utility to those airports without incurring the infrastructure cost of adding the ground equipment necessary for ILS approaches.

WAAS capable GPS receivers are prevalent; while very few aircraft (the Airbus A350 is one example) have GBAS capable GPS equipment.

The gist of your question is whether it is possible to couple RNAV with ILS? The following ILS chart of Cochin Airport (VOCI) is an ILS approach where Initial and Intermediate approach are executed using RNAV (GNSS)instead of conventional Navaids but final approach is ILS. Aircraft with RNAV1 capability can execute this approach. 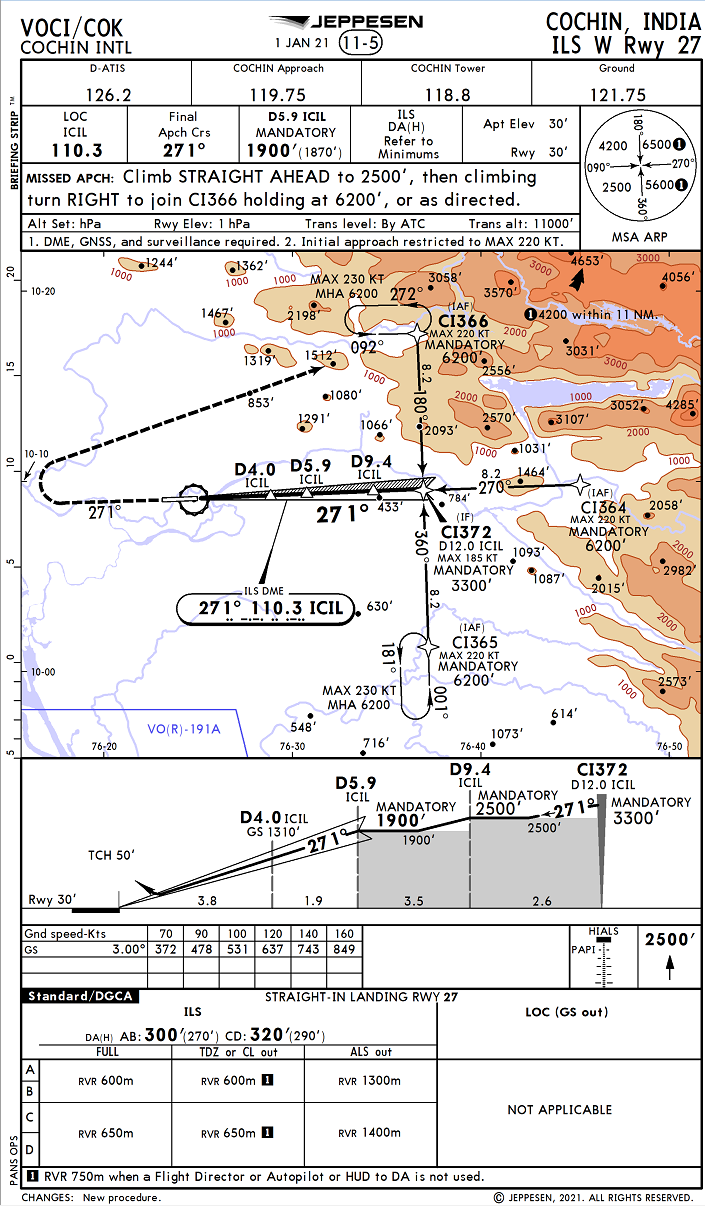 RNAV(GPS) procedures being combined with LPV or LNAV/VNAV, which are Landing Systems

Your confusion here is that LPV is a landing system which it is not. It is a way of saying your GPS is going to work kind of like an ILS and will have similar horizontal/vertical responses on your way down or as the FAA puts it

Similarly LNAV is not an approach system its an idea, again from the FAA.

LNAV approaches can use various types of instrumentation like a VOR, or a GPS.

When you combine an LNAV approach with some type of vertical guidance you get LNAV/VNAV or LPV. The difference will be how your aircraft is equipped as well as what service level you get. If you have a WAAS capable GPS with good reception you may have the ability to get an LPV approach, if your reception is not as good you may get downgraded to LNAV/VNAV minimums.

In some GPS units you may get a glide slope display even if you are only flying an LNAV approach. This will display as LNAV+V on your GPS unit and means Lateral navigation with ADVISORY vertical guidance. i.e. this glide slope may be safe to fly but is not guaranteed and you need to fly the step down altitudes.

This would mean, to me, that, "RNAV-equipped" flights can still use an ILS Landing System. Is this combination possible?

If you have a receiver/CDI only capable of displaying lateral information you can only fly the localizer approach. A localizer approach uses the lateral component of an ILS with step down altitudes. The altitudes are based on points that are often based on a DME or other radial intercepts.

There are only two airports in the US approved for GBAS approaches and you need some fairly special avionics to fly the approach. GBAS minimums vary depending on operation you can find some more info on that here.

Only one of the previous answers has emphasized the most important misunderstanding in this question. PBN, LPV, LNAV/VNAV, LNAV-Only, etc, are not landing systems. They are criteria by which landing systems are measured and classified. The measurements will determine other criteria like Decision Altitude/Height and Minimum Descent Altitude/Height.

RNAV, ILS, MLS, Localizer, Glideslope, VASI, PAPI, etc, are all landing systems which utilize the above criteria. There is some bleed over between landing systems and navigation systems since RNAV, VOR, and NDB can be used for both.

As far as the question about combining RNAV with other radio NavAid equipment based Standard Instrument Approach Procedure, one only has to look at the Aeronautical Information Manual Section 1-2-3. This allows RNAV to substitute for DME on approaches requiring DME. Also, RNAV can be used to navigate any procedure or to navigate to the Intermediate Approach Leg of any procedure up to but not including the Final Approach Fix (except for DME). Once you reach the Intermediate Leg, you must establish yourself on the Final Approach Course utilizing the navigational equipment prescribed in the approach (allowing for substitution of DME by RNAV).

Not the answer you're looking for? Browse other questions tagged ils terps rnav performance-based-navigation iap or ask your own question.

12
Why are sidestep ILS minima not used in EASA-land? (specific example: EGKK)
3
Is GLS (GBAS landing system) an RNAV approach?
0
Substitute Suitable RNAV system for Inop Radar on approach “requiring” Radar
1
Does ATC prefer ILS over RNAV?
3
Which Navigation Specifications support an RF leg?
2
Does EASA allow using a portable GPS for RNAV capability?
6
Why RNAV SIDs and STARs are RNAV 1 instead of RNP 1?
7
What is the difference between a conventional and an RNAV holding?