What is being depicted w.r.t. AoA in this video? 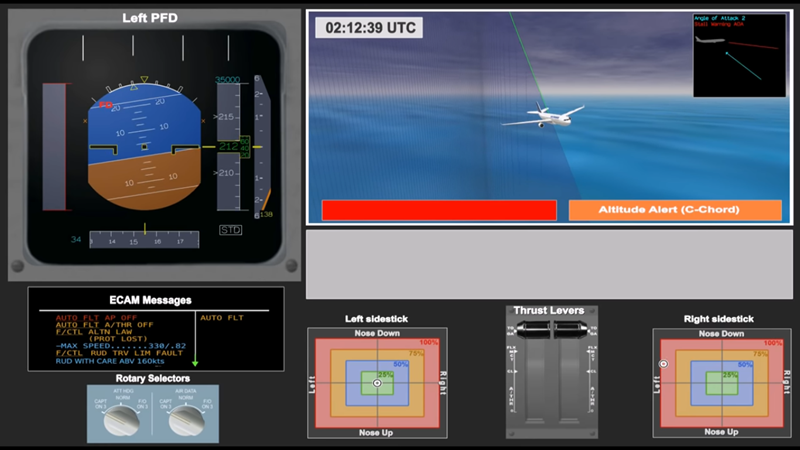 I was looking at this video of the AF447 crash simulation and at about 4:45 the angle of attack diagram shows a few things I don't understand (frame above).

I get the orientation of the airplane, pointing a few degrees above the horizon, but what does the green line represent in layman's terms? Is that the direction the plane needs to go for the wings to generate lift?

Also, I see the red line has to do with the warning, but how does that play into it as well?

There are several colored lines. Which one are you asking about? I'm assuming you are referring to the (cyan?) and red lines in the upper right inset. 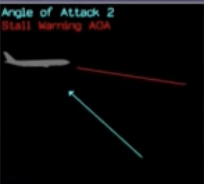 The cyan line shows the current direction of the airflow. When compared with the orientation of the airplane can show the angle of attack. At this time, the relative wind is coming at a very steep angle to the airplane and the wing is stalled.

The red line is at a constant angle with respect to the airplane and shows how low the airflow can go without causing a warning. As it is below this line, the stall warning has sounded.

The green is the same as the cyan in the small window in the top-right corner. It is where the plane is going right now. In cyan the arrow head represents the air hitting the aircraft's belly. In other words, the plane is falling belly first.

The red represents how big an angle is needed to trigger a stall warning; the green/cyan is much bigger. The plane needs an angle smaller than the red (more toward the nose) to not be close to a stall.

Not the answer you're looking for? Browse other questions tagged angle-of-attack af447-accident or ask your own question.

2
What is the difference between Angle of Incidence (AoI) and Angle of Attack (AoA)?
15
What were the advantages of the L-1011 AoA sensor design?
19
What is the stall AoA for the space shuttle?
1
Does this web page really correctly depict the angle that is called “incidence” in the French language in the aviation context?
2
What is the reason for this discrepancy regarding the CRJ100/200's stickpusher-activation angle?