What is the technique or procedure to disable/disengage the MCAS on Boeing 737 Max 8 & 9 Aircraft?

What is the technique or procedure to disable the MCAS and manually fly the Boeing 737 MAX 8/9 Aircraft?

To clarify my question, what I'm asking is can the pilot disengage the MCAS and if so, how do they do that? Is it just flipping a switch or popping a breaker, or is it a complicated set of procedures?

UPDATE: The answer to this question explains how to disable/disengage the MCAS from pitching the nose down.

UPDATE: This video is the most concise answer to my question that I have found. It shows a crew in a full motion simulator like the Boeing 737 Max 8 that crashed in Ethiopia, then it shows the proper technique to disengage the MCAS and manually trim up in the same scenario.

MCAS doesn't have its own on/off switch

It is a fly-by-wire feature designed to account for a particular flight regime that would not (or was not expected to be) encountered very often in normal operations, and is intended to account for some of the aerodynamic effects of the LEAP-1B (CFM International) engine installation for this model. Its activation requires a number of preconditions, but we'll get to that in a moment.

A concise description of the system is found here. The observation was a follow up to an observation that the MCAS isn't an anti stall feature like a stick shaker, but rather ...

A few things that should disable it (with caveats)

The manual pitch trim procedure appears to be what a few crews did prior to the LionAir crash in October 2018. It is unclear how many of the crews knew that it was MCAS that was malfunctioniing, versus any other trim or pitch anomaly. The previous LionAir crews on the accident aircraft ended up flying to their destination manually. (Original source is the Preliminary Report from that accident).

... pilots encountered problems involving the AoA as well as the pitot tube used to measure airspeed. In a flight in the same plane the day before, to Jakarta, the pilot experienced many of the same symptoms as the pilots on flight JT610: the stick shaker activated during rotation, an indicated airspeed warning alert appeared, and the aircraft began automatically pushing the aircraft nose down.

The pilot, after determining that his flight display system was malfunctioning, ran a runaway stabilizer non-normal checklist which led to the MCAS being disconnected when the stabilizer trim switches were turned off. The copilot flew the rest of the flight using manual controls and without autopilot.

That Jakarta flight was using an angle of attack sensor that had been replaced after the previous Lion Air flight to Denpasar experienced problems. {snip} However, it is not clear whether the pilot communicated that he ran a runaway stabilizer non-normal checklist during the flight, which might have alerted the airline’s engineering staff that there was still a problem. (source)

That last part is a little bit complicated: the autopilot may not stay on if it - the autopilot system - keeps getting spurious signals from the AoA sensors, or if the pitot static system is providing bad data to the FCCs.

How do you know that you need to disable MCAS?

A related question is "when do you know that it's time to turn off Stab Trim switches?"
The problem for a given crew is: how do you know what sub-system is giving you trouble? The AD released in December of 2018 updated the Runaway Stabilizer procedure. Since there are other malfunctions possible in the trim system for pitch, such as a trim runaway, the same (or similar) symptom may manifest during malfunctions with different causes. (See the example above). If additional symptoms are present, such as a stick shaker activating from an erroneous AoA indication or some other fault, which problem do you solve first?
Which problem are you having?
Are you having both problems, or even something else?

That concern, the relationship between different potential failure modes, gets to the heart of

The MCAS is only supposed to activate under certain conditions (in theory): high angle-of-attack, flaps-up, flight with autopilot off. This includes high angle of bank flight in such conditions. 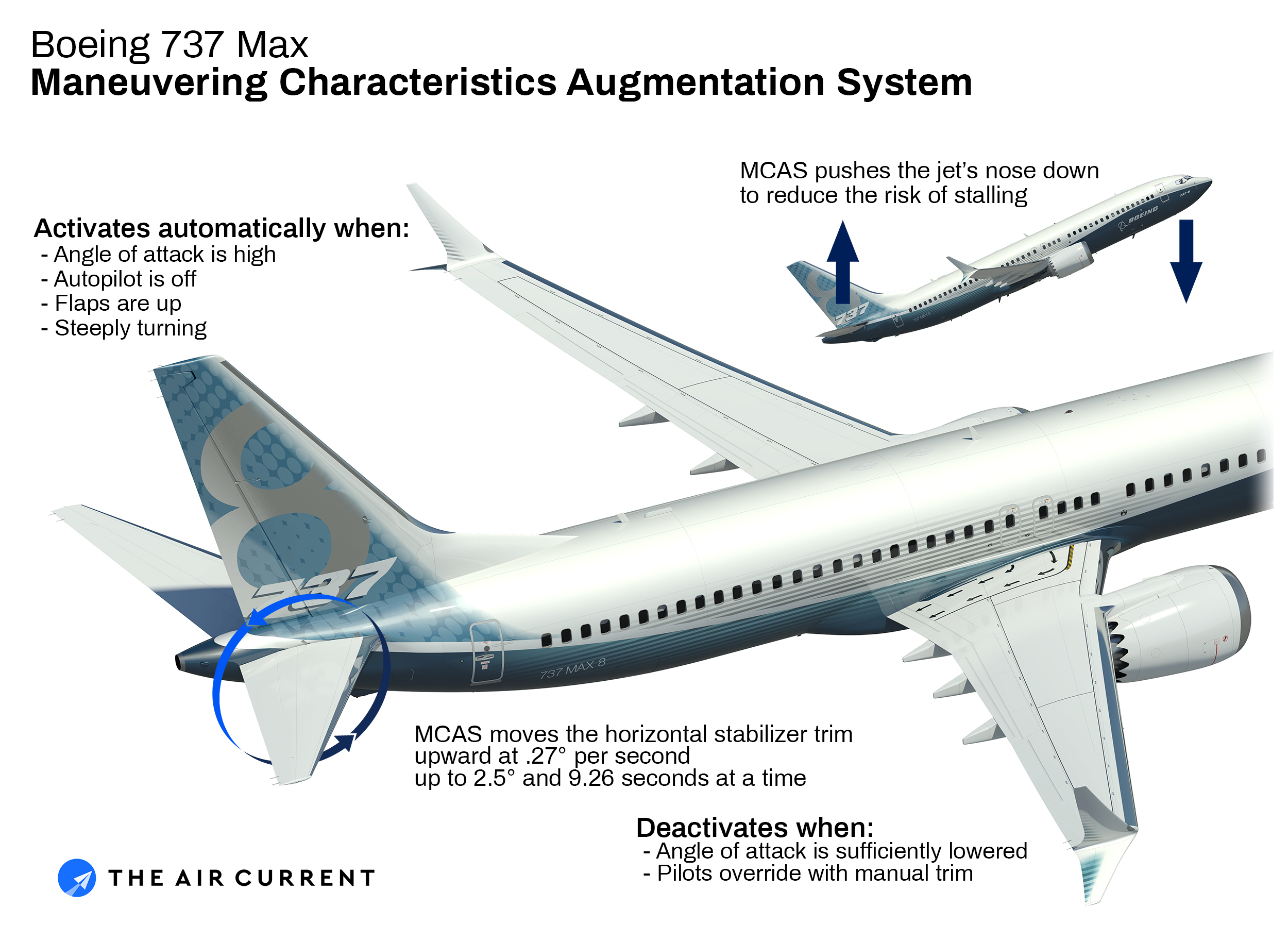 ###CAVEAT Take a look at that last bullet in the lower right of the figure. It's only partially correct. When the pilot overrides with yoke trim, MCAS will try again five seconds later (after the pilot has stopped) unless the triggering condition, or signal, goes away.

It is this system behavior that is believed to have ultimately overcome the best efforts of the pilots in the LionAir crash. They were airborne for about six minutes before they were no longer able to overcome the horizontal stab position with their trim controls. (Caveat: current as of early 2019. When the final report comes out this may become a lot clearer, and may need revision).

Why is this activating during takeoff/departure?

That MCAS appears to activate(sometimes) during routine flight regimes is believed to be catching some crews by surprise - and not just the two accident crews. There is a recent article in *Atlantic* that excerpts some NASA reports by aircrews in the US about some cases of unexpected / odd pitch behavior in this model aircraft. As of mid 2019, the AoA signal (be it from signal error or a faulty AoA probe) has been identified as a part of the problem in this unexpected activation during takeoff and departure.

1 Note from @user40476, slightly edited:
If you are a bit late to switch off both CUT OFF switches, the deflected angle of the THS will create strong forces on the trim screw, more particularly if simultaneously you hold the yoke to maintain an acceptable pitch.
Critical Flight Safety Issue Follows
In these conditions, it becomes very hard to move the trim wheels manually. This is a major problem; the trim wheel diameter in the 737-MAX is smaller then the trim wheel of the previous models: 737-100, 737-200 etc. This smaller diameter reducing the efficiency of the pilot force on the wheel handle. (Less leverage for the same amount of pilot force applied).

Important Note: this answer is based on information available before the deep dive into the MCAS system that was required to recertify the 737 Max. It will probably require revision when the final recertification process of the 737 Max is completed. 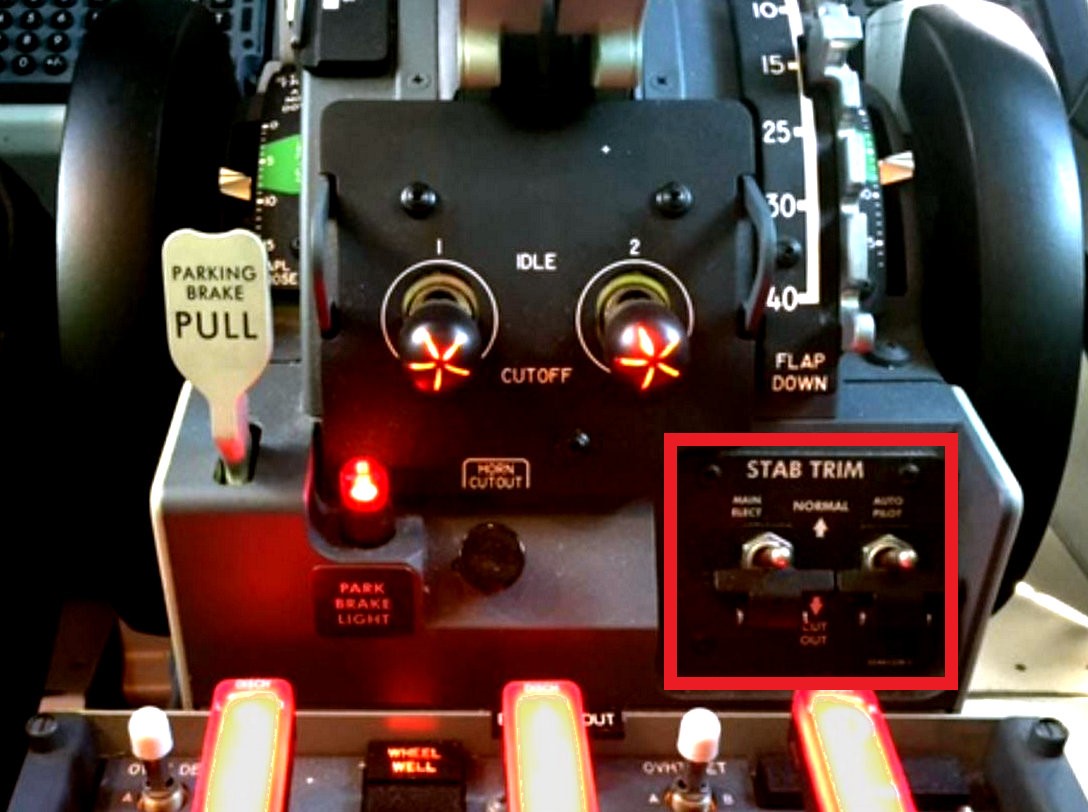 You can disable the stabiliser trim which will prevent MCAS from making inputs to the aircraft.

From what I have read, the other answers explain the cutout procedure correctly.

Edit: The ongoing investigation appears to reveal that the aerodynamic forces on the stabilizer may become so high that it becomes hard or impossible to manually correct a nose-down trim. (This is not a B373 MAX issue but concerns earlier models as well.) The forces increase, unfortunately, with upward elevator position and high air speed, which is the situation in the final nose-dives. The remedy is described in the page user40476 linked to:

If the stabilizer put the plane in an extreme nose down position the pilot was advised to first pull the column to decrease the speed. He then had to push the column forward to lower the aerodynamic forces that blocked the jackscrew. Then the manual trim wheel could be turned a bit while the plane continued to dive and again increased its speed. The procedure had to be repeated several times: pull column to decrease speed; push column to decrease the aerodynamic force on the stabilizer and its jackscrew; trim manually; repeat. The technic was known as the rollercoaster maneuver.

Other sites (https://theaircurrent.com/aviation-safety/vestigal-design-issue-clouds-737-max-crash-investigations/, http://www.b737.org.uk/mcas.htm#mantrim) agree that the pilots may simply have been unable to operate the manual trim wheels because of the high aerodynamic forces.

Therefore the simulation in the video you link to where the co-pilot appears to turn the wheel with relative ease is probably incorrect in this respect.

It is also important to keep in mind Korvin's remark that trim anomalies can occur for a variety of reasons. What I have not seen mentioned often or clearly enough is a crucial difference that distinguishes MCAS from regular trim control, a difference which was apparently not communicated clearly enough to the pilots. As an article by Leeham news points out:

[MCAS is] not stopped by the Pilot pulling the Yoke, which for normal trim from the autopilot or runaway manual trim triggers trim hold sensors.1

This is a difference to previous B737 models which was not mentioned in the manual (as there was no reference to the MCAS at all) and thus was unknown to pilots before the FAA advisory was published.2 From the NASA incident reports published in the Atlantic it becomes clear that the FAA advisory after the LionAir crash was discussed among the pilots. Apparently there were a few incidents where performing the proper cutout procedure saved the airplanes, among them the preceding LionAir flight.

would negate why MCAS was implemented, the Pilot pulling so hard on the Yoke that the aircraft is flying close to stall.

In other words, MCAS is a mechanism installed to correct an already present pilot error. Logically, this corrective intervention by the flight computer can only be cancelled through a dedicated operating sequence. It's also worth mentioning that even extreme yoke action, working on the elevators only, is not able to fully compensate extreme stabilizer positions, the control surfaces MCAS uses (apart from, I suppose, creating unpleasant flight characteristics).

2 An article in the Seattle Times on March 17, 2019 presents that argument as well.

Not the answer you're looking for? Browse other questions tagged safety aircraft-systems boeing-737 mcas or ask your own question.

-4
How do you disable plane AI when the plane goes crazy?
14
Can computer imposed inputs be overridden on the Boeing 737-MAX?
6
What are the checklist items for a runaway stab trim on a B737 MAX 8 and MAX 9?

7
Are the Boeing MCAS and Airbus Alpha Protection systems the same?
4
Is the Boeing 737 MAX 8 MCAS exceptional in operating when autopilot is off?
6
what type of sensors does the Boeing 737 MAX use for MCAS?
12
Why would Boeing's MCAS be preferable to a modified Feel and Centering Unit?
5
How the stabilizer cutout switch functionality has changed from Boeing 737 NG to 737 MAX?
1
Was MCAS part of 737 8 MAX MMEL list?
4
Will the 737 Max 10 have MCAS?
4
Why doesn’t the A320 family suffer from the same design constraints regarding engine placement/landing gear length as the Boeing 737 family?