What is difference between TAA and MSA?

I know the 'TAA' usually used in RNAV chart, but sometimes it can be used in ILS chart as well. (When defining an IF, GPS is solely methods)

but While I'm studying, I can't find exact difference between TAA and MSA.

Can you let me know ?

From the FAA Chart User's Guide

MSAs are published for emergency use on IAP charts. MSAs appear in the planview of all IAPs except on approaches for which a Terminal Arrival Area (TAA) is used. The MSA is based on the primary NAVAID, waypoint, or airport reference point on which the IAP is predicated. The MSA depiction on the approach chart contains the identifier of the NAVAID/waypoint/ airport used to determine the MSA altitudes. MSAs are expressed in feet above mean sea level and normally have a 25 NM radius; however, this radius may be expanded to 30 NM if necessary to encompass the airport landing surfaces. Ideally, a single sector altitude is established and depicted on the planview of approach charts; however, when necessary to obtain relief from obstructions, the area may be further sectored and as many as four MSAs established. When established, sectors may be no less than 90° in spread. MSAs provide 1,000 feet clearance over all obstructions but do not necessarily assure acceptable navigation signal coverage.

The TAA icons will be positioned in the planview relative to their relationship to the procedure. The icon will not have feeder routes, airways, or radar vectors depicted. The TAA provides a transition from the enroute structure to the terminal environment with little required pilot/air traffic control interface for aircraft equipped with Area Navigation (RNAV) systems. A standard TAA has three areas: straight-in, left base, and right base. The arc boundaries of the three areas of the TAA are published portions of the approach. A TAA provides minimum altitudes with standard obstacle clearance when operating within the TAA boundaries. TAAs are primarily used on RNAV approaches but may be used on an ILS approach when RNAV is the sole means for navigation to the IF; however, they are not normally used in areas of heavy concentration of air traffic. 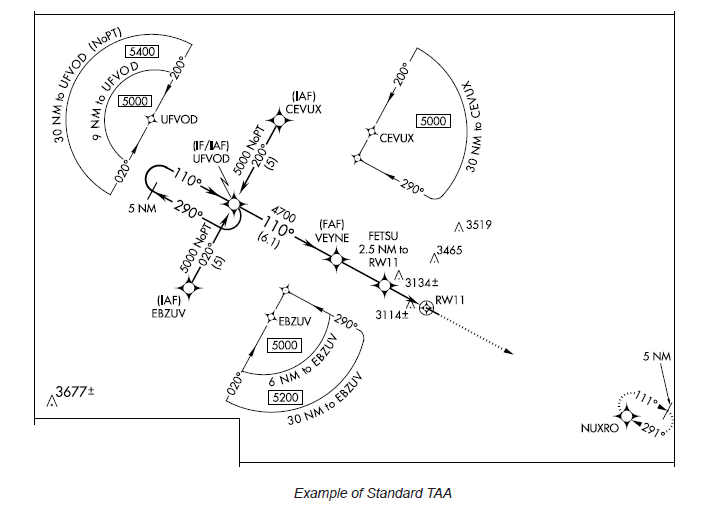 Non-standard TAAs may also be published; i.e., one base leg, no base legs. 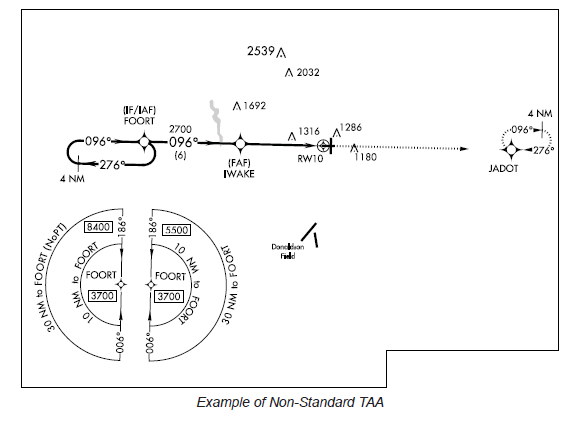 MSA's are referenced to a primary navaid, waypoint or airport reference point associated with the IAP. They show safe altitudes for a 360 degree area around the reference.

TAA's are referenced relative to their relationship to the procedure. Generally, that means one reference diagram for each IAF placed near the IAF depiction.

Not the answer you're looking for? Browse other questions tagged ifr-navigation or ask your own question.