Why would a jet engine that runs at temps excess of 2000°C burn when it crashes?

Airline engines are designed to work at very high temperatures. Yet, when a plane crashes they're burnt (see below). Is it something in their design? 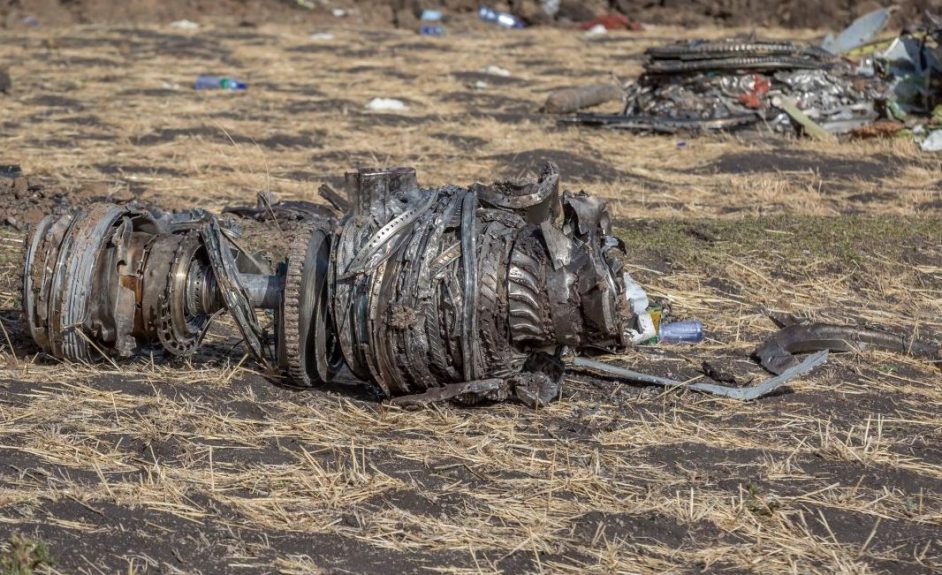 How The Jet Engine Works:

Inside the typical commercial jet engine, the fuel burns in the combustion chamber at up to 2000 degrees Celsius. The temperature at which metals in this part of the engine start to melt is 1300 degrees Celsius, so advanced cooling techniques must be used.

You can read more about some of those cooling mechanisms in How are temperature differences handled in a jet engine?

See also, How do you stop a jet engine melting?:

Neil - The normal melting point of the nickel blade alloys that we use in the turbine is typically about 12-1400 degrees. But what you do, and this is the clever bit, is you actually cool these blades. You have internal cooling passages, which effectively has air that flows through and it's about 7-800 degrees. And this cooling air then exits from small little minute holes that have been drilled on the surface of the blade and this air then forms a kind of a film on the surface of the blade, and this technology is typically called a 'film cooling.'

The engine is designed to manage the intense heat in a controlled way, by restricting it to certain components, injecting cool air around the hot parts, and choosing different materials for different parts of the engine. If the engine is severely damaged, doused in jet fuel, and set on fire, none of those mechanisms function; the entire engine (or whatever is left of it), as opposed to just the portions intended to manage heat, will be hot, and none of the cooling mechanisms will be working.

Peter's answer to another question has a nice chart that shows internal jet engine temperatures:

You can see that the temperatures are highest by a fairly large factor in the combustion chamber. This means that only the combustion chamber needs to be able to withstand those temperatures. To save weight and often use less expensive and less exotic materials, the rest of the engine may be made out of materials that don't need to withstand such high temperatures. As such, in an accident where jet fuel may be dispersed in an uncontrolled way and burn with as much oxygen as it can get, it's easy to scorch engine parts and anything else around.

It also is in part a question of time. The ability to withstand heat varies with time. In a crash of a fairly fueled aircraft that may burn uncontrolled for a long time you are likely to find scorched parts like this. Whereas a plane that runs its tanks try and crashes in a field may not see the same fire marks. However, if the plane hits the ground with enough force the heat generated from the impact can also lead to markings like this.

First off, the engine is running around 2000° F (NOT 2000° C/3632° F) only in a few places within it. The Turbine Inlet Temperature (TIT) can be that high but cools rapidly when the exhaust gases are rapidly expanded through the high and low pressure turbines to exit at approx 1000° F at the jet pipe (enthalpy is converted into mechanical work here). Most sections of the engine are not designed for that high of a temperature and may well oxidize or deform in the post crash fire.

UPDATE: While I do not have definitive values for the max TIT of a CFM-LEAP engine, a good estimate would be around 1500°- 1600° C (2732° - 2912° F) as this represents about the state of the art for gas turbines outside of a few military applications. This source quotes that the Pratt & Whitney F-135 can operate at TITs of 2000° C due to its use of a proprietary ceramic coating over single crystal nickel cobalt superalloys for the hot section. It is unclear whether that is a sustained engine power setting or simply a max operating temp prior to destruction. This is NOT representative of a typical aviation gas turbine, which run much cooler. I would stand by my original figure of 1000-1200° C TIT for earlier gas turbines eg PT-6, J85, J79, etc.

Not the answer you're looking for? Browse other questions tagged jet-engine accidents aerospace-materials or ask your own question.

10
What is the purpose of those casing treatments and how were they designed?
31
What would have happened if the jet engine on my aircraft had ingested caulk from the pavement?
28
Why bother having different engine options on one aircraft?
4
Is it possible to build a jet engine that utilises all excess heat?
20
Why is a (jet) engine in flight shutdown so critical?
33
Why don't 747s use unreliable, but cheap, jet engines instead?
1
What exactly is engine design speed?