How many serious airline accidents have been caused by design faults alone?

That is, in the chain of events that led to death or injuries in an airline accident, how often has a design fault been solely responsible?

By a design fault I mean a problem such that even if the equipment:

eventually it would still inevitably eventually kill or injure its passengers.

I can think of only two examples: the early Comet's square windows, and the Boeing 737 rudder power control problem.

All the others I can think of include errors of piloting, manufacture, maintenance or just plain bad luck in the chain of causes.

The Douglas DC-10 - The door latching mechanism was not robust and the design of the safety indication was flawed. In the Paris incident Douglas tried to blame the handler who closed the bulk compartment door for using excessive force when latching the door but ultimately the design was at fault.

I'd say British Airways flight 38 qualifies. Flawed design of the fuel/oil heat exchanger allowed ice to block fuel flow. The aircraft was operated within intended limits and the crew did everything correctly. It was not a maintenance issue nor a manufacturing error.

One of the early ones is the crash of a BFW M.20 on the Berlin-Goerlitz route on April 14, 1931. In a gust the rear fuselage was twisted by 60°, the tail surfaces almost broke off and the aircraft crashed. The crash investigation concluded that the design was good enough to satisfy the certification requirements, but that flight loads exceeded those. As a consequence, the certification loads were doubled.

Also, the rudder hard-over with the early Boeing 737s comes to mind. Those accidents caught the poor pilots in a trap. And maybe the first deep stall with the One-Eleven in 1963. Later accidents with the Hansa Jet and the Trident could had been avoided had the engineers and test pilots studied the One-Eleven accident better. Tupolev did and increased the tail size of their Tu-124A (which became the Tu-134) by 30% as a reaction.

The 1991 Lauda Air Boeing 767 uncommanded thrust reverser deployment might also fit. It happened before, in 1990, on the C-5A when the thrust reverser of the No. 1 engine deployed right after takeoff. Similar to Hawker-Siddeley before them, Boeing refused to learn that lesson and tried to cover up this design flaw.

Borderline case: The Kegworth air disaster, when a fan blade on the uprated CFM56 engine of a Boeing 737-400 broke and the different sourcing of flight deck air caused the pilots to shut down the good engine. It turned out that the engines had not been sufficiently tested and the pilots had insufficient familiarity with the engine instruments, so they came to their wrong conclusions (which would had been correct on the earlier 737s).

The Douglas DC-6 apparently had a design flaw in the cabin heater that caused one fatal accident and another emergency landing in 1947 before the design was corrected:

The Lockheed 188 Electra had a design flaw with regards to the engine mounting that caused catastrophic resonance and broke off the wings of two aircraft before it was corrected:

The infamous Boeing 787 battery problem caused at least one emergency landing and evacuation, with a small number of passenger injuries:

ANA said that the 129 passengers and eight crew were evacuated, with a number of people sustaining minor injuries.

The Reuters news agency reported that five people were injured, while Bloomberg said that one person was sent to hospital. ANA officials were not immediately available to confirm the figures.

To answer the title question of how many, we need to check the proper Accident Classification Taxonomy as used by IATA.

10% of the jet accidents are design related$^1$ 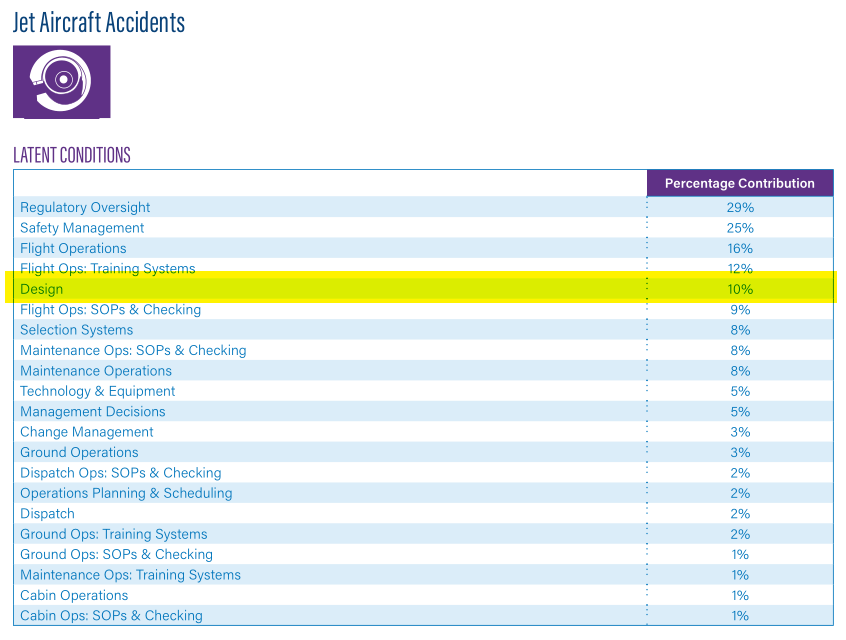 13
Have there ever been any accidents within holding stacks?
7
How have deep-seated cultural human factors (particularly in east Asia) in the cockpit been successfully managed in the past 20 years?
32
Have there been any incidents caused by an inability to shut down an engine?
2
Have there been accidents involving flight simulators?