How do preceding aircraft affect the ILS signals? 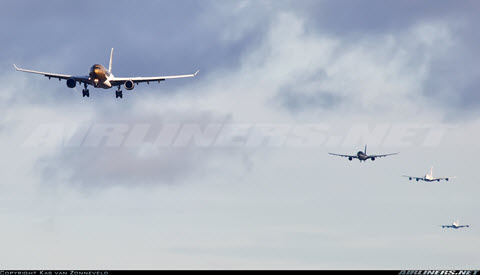 (airliners.net) Planes on approach in sequence to London Heathrow.

When LVP is in effect, the ILS area is protected.

I'm wondering, when there is a queue to a runway, how does the long queue affect the signals for those behind?

I'm guessing it does somehow, and the answer may shed some light on the new Enhanced ILS.

I've never noticed any perturbation of the ILS signal from aircraft ahead in flight. Aircraft on the ground crossing the runway, absolutely yes. Something big enough (747 or A-380) exiting at the far end, perhaps briefly, but not generally something you notice.

I'll let somebody else explain the theory, but that's my observed results.

The photo in the question is actually what you get when ATC issues visual approaches. Visual approaches allow many more planes per hour and relieve ATC workload. For a true ILS approach the absolute minimum radar separation is 3 miles (even after the lead plane slows for landing) and up to 6 miles when following a super. In addition, for aircraft over 12500 pounds [leading or following] the runway must be cleared before the following plane crosses the threshold.

Now the effect of aircraft on the ground is different because they may be very close to the transmitter and so can block, absorb, or distort a large percentage of the transmission. Similar to blocking a flashlight with your hand; very close will block a large portion of the light but at several feet away you can only block few percent. On top of this there is diffraction lensing around the lead aircraft so that it doesn't make a solid shadow, this effect is overpowers by the wide angles associated with an aircraft on the ground immediate to the transmitter.(see Aragoscope for more details) In short Aircraft on approach are a long distance from the transmitter so they have little effect and they exit the runway fairly quick after landing. The effect is roughly the inverse of the distance from the transmitter cubed. $$\frac{1}{dist^3}$$ So an object at 6000 feet(one N.mile) will have about $\frac{1}{216}$ of the effect that the object has at 1000 feet. (0.46%)

1
Out of sight planes during final approach
34
Why are visual approaches (in the US) preferred by US pilots, but not European pilots?
31
Why would one plane in this picture not have gear down yet?
35
Why don't pilots always use autoland?
11
How does an eILS improve throughput (for the A380)?

28
What is the behavior of false glideslope signals?
21
How precise is an ILS (Instrument landing system)?
7
What is the difference between the ILS Critical Area and the ILS Sensitive Area?
11
What is the purpose of having different ILS categories?
7
How much does an ILS approach cost?
2
How and where is the ILS Glide Slope DDM to dots conversion defined?
5
Do different planes (category) aim differently in the 'final stages before flaring'?
4
How often is ILS accuracy checked?
4
How to choose the right ILS when the runway has more than one?