How is the camera positioned for these plane-to-plane Schlieren images of shock waves? 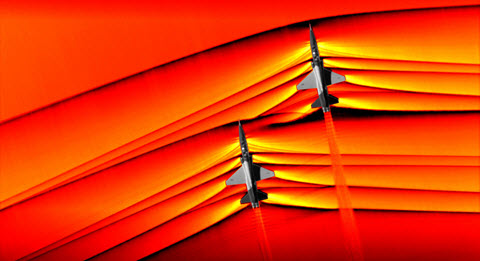 These two popular press articles discuss the use of schlieren photography to image shock waves of jets during flight using a special schlieren camera on a third plane.

NASA's Glenn Research Center page on Schlieren photography is instructive but doesn't give a clue how this is done. Where is the camera relative to these target aircraft, and what's behind them?

This NASA page shows a diagram of traditional Schlieren photography but in that case a special light source is behind the plane, and the present photos are "in the wild" rather than in a laboratory setting.

Where is the camera relative to these target aircraft, and what's behind them?

Straight from NASA themselves:

NASA flew a B-200, outfitted with an updated imaging system, at around 30,000 feet while the pair of T-38s were required to not only remain in formation, but to fly at supersonic speeds at the precise moment they were directly beneath the B-200 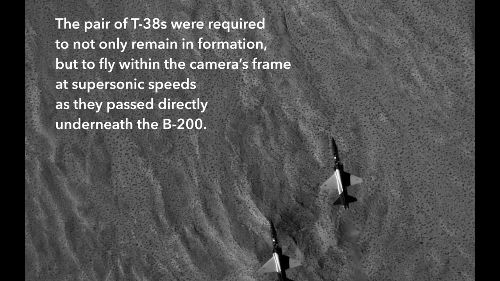 As the question mentions this NASA page shows a diagram of traditional Schlieren photography and it's the idea I had in my head. I assumed you'd need a carefully prepared light beam and couldn't figure out how this was done.

Than's to @ymb1's comment, here are some slides from the NASA Armstrong Flight Research Center presentation Flow Visualization of Aircraft in Flight by Means of Background Oriented Schlieren using Celestial Objects and a technology licensing announcement from NASA: page and pdf.

This invention is an imaging method that requires very simple optics on an airborne vehicle, a camera with an appropriate lens, and an area on the ground that provides visual texture. The complexity with this method is in the image processing and not as much with the hardware or positioning, making Background Oriented Schlieren (BOS) an attractive candidate for obtaining high spatial resolution imaging of shock waves and vortices in flight. First, images are obtained of a visually textured background pattern from an appropriate altitude. Next, a series of images are collected of a vehicle in flight below the observer vehicle and over the same spot on the ground that serves as a background pattern. Shock waves are deduced from distortions of the background pattern resulting from the change in refractive index due to density gradients. The invention requires special software to create the schlieren images. The schlieren image is a contour plot of a two-dimensional data array of measured distortions, in pixel units. The results are used by researchers to help understand the flow phenomenon and compare to computational models.

Basically the camera takes two photos of a area with a complexly textured surface, one without a supersonic wake, and one with. Then pixel-by-pixel they calculate a tiny deflection of the image caused by refraction.

This is not an interferometric technique! It's similar to taking a photo of the bottom of a pool of water when the water is calm, then taking a second when the water has ripples and the bottom is refracted, then throwing the two images into a computer program to calculate what surface would have caused those wiggles in the image. If the bottom of the pool were blank, there's nothing to see.

In the earlier work the NASA group used the Sun as the textured background. They used a special filter that produces a highly granular image as the background, then shot the target planes upwards from cameras on the ground. The filter's passband is unrelated to schlieren imaging, it simply made the Sun appear granular. 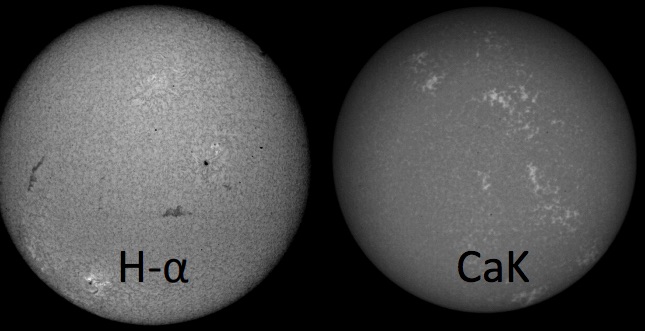 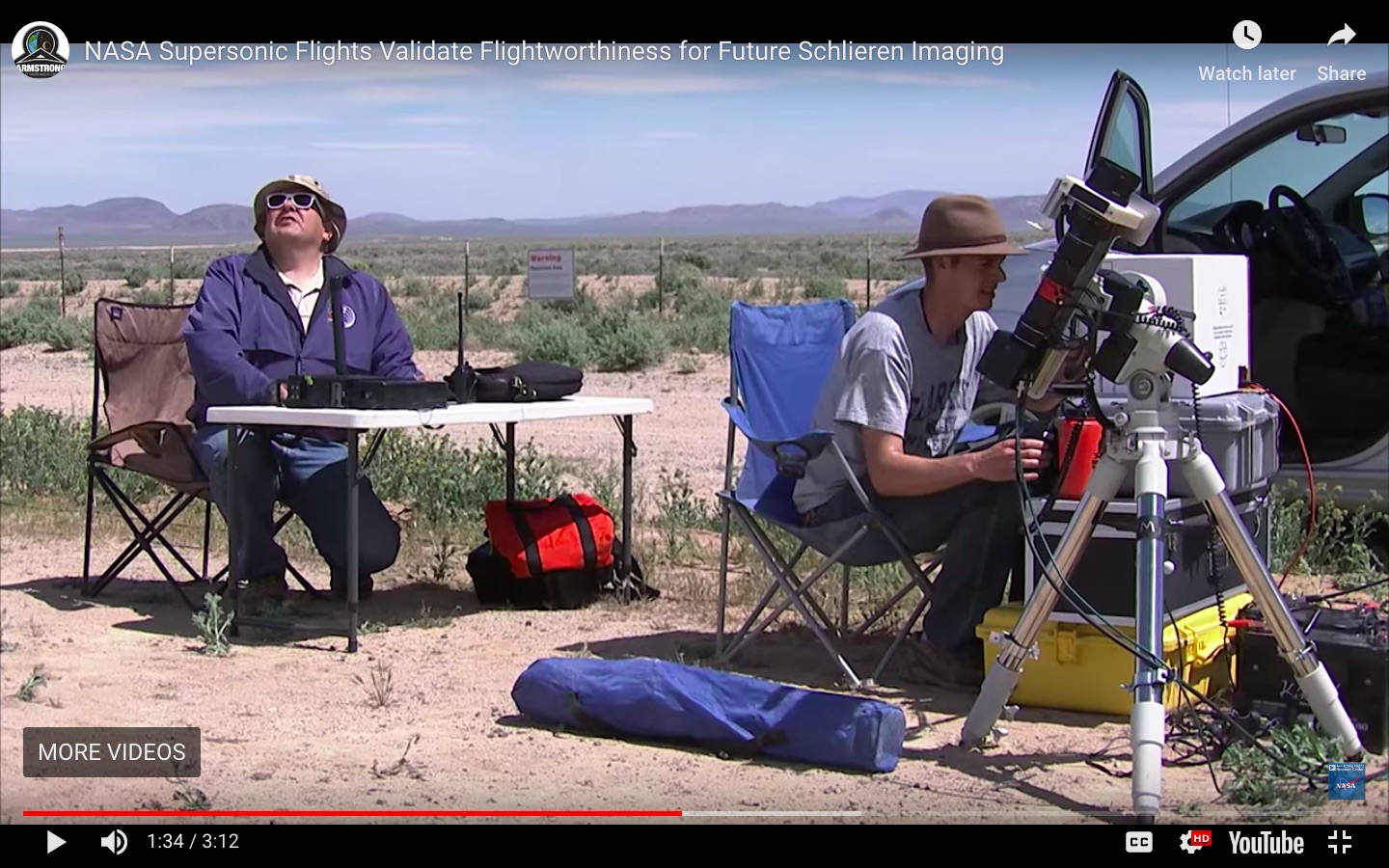 In the most recent image, they went back to using a highly patterned area on the ground as the background.

This means that the camera plane had to fly over and photograph the same bit of ground twice, from the same position in the air.

Once with the target panes and their wakes, and once without the planes to get an undistorted, un-refracted image for comparison.

One of the greatest challenges of the flight series was timing. In order to acquire this image, originally monochromatic and shown here as a colorized composite image, NASA flew a B-200, outfitted with an updated imaging system, at around 30,000 feet while the pair of T-38s were required to not only remain in formation, but to fly at supersonic speeds at the precise moment they were directly beneath the B-200. The images were captured as a result of all three aircraft being in the exact right place at the exact right time designated by NASA’s operations team.

Thanks to @Federico for finding and linking to this video!

Since they are measuring a two-dimensional displacement field, in a similar way to an optical flow measurement, they get a vector field rather than an intensity field for traditional schlieren imaging. That means they can play with the gradient in new ways. 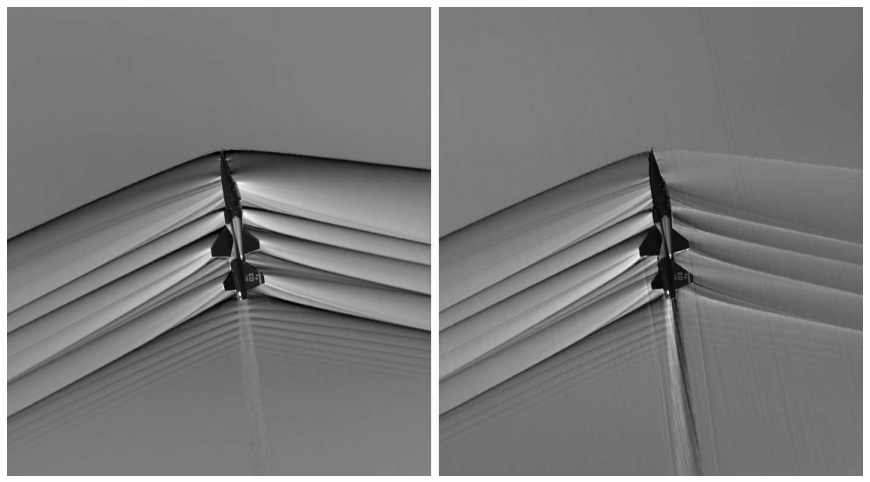 Not the answer you're looking for? Browse other questions tagged supersonic shock-waves measurement nasa or ask your own question.

6
What would the density profile of this shock wave look like, roughly?