What is the difference between a forward slip and a side slip?

I am having a hard time understanding what differentiates the two types of slip. I understand that in a forward slip, the longitudinal axis is tilted with respect to the flight path, whereas in a side slip it is not. In a forward slip your track stays the same, whereas in a side slip it would (in the absence of wind) cause you to track toward the down wing.

My difficulty comes from the fact that the control inputs needed to enter both are the same: banking with opposite rudder.

Why then is the heading of the aircraft with respect to the flight path different, if the control inputs are the same? Is it just a question of degree, which is to say, the forward slip just requires more rudder?

There is no difference aerodynamically. The only difference is in intention and presence of the wind. The airplane does not care about the ground track, all it feels is the movement through the air. Both side- and forward-slip make the airplane fly slightly sideways through the air, somewhere in the direction between nose and downwards pointing wing.

If there is no wind, your ground track will be exactly the same, between wing and nose, and you will feel that the nose points away from your track and call it forward-slip. If the wind is blowing and you manage the right amount of slip, you are moving sideways through the air, but the ground track (combination of wind- and slip- movement) can be aligned exactly with the nose and you call it side-slip.

Sideslip and forward slip are actually the same thing. They are both intentional cross controlled, unbalanced flight. The only difference is where the runway is oriented with respect to the aircraft's attitude, and the reason for executing the slip.

In what is being called a "forward slip", (used to lose altitude without gaining airspeed) the winds are approximately straight down the runway, so the aircraft attitude must be cocked to the side to keep the flight path lined up with centerline as the aircraft actually sideslips at an angle towards landing.

In a crosswind situation the reverse is true: The aircraft's flight path relative to the wind is into the direction the wind is coming from, (angle of bank into the wind to keep from drifting) but the aircraft is cross controlled with rudder to keep the nose lined up with centerline.

The aircraft's attitude with respect to the relative wind is the same in either case. Any time an aircraft is in unbalanced flight it is slipping both forward and sideways to some extent. The only difference is whether you are compensating for a crosswind or not, and where the runway is on your windscreen.

The difference is in application. First, the forward slip (my favorite). The inputs (for a 172) are full rudder and opposite aileron as needed to hold straight path. This is cross controlled, but safe if you maintain a healthy margin above stall. I did mine at 65 knots. The purpose is to increase drag, producing a faster rate of descent for a given airspeed.

A side slip is used to hold your track in a cross wind. Here you aileron (drop wing) into wind as needed to stop being pushed sideways, using opposite rudder to control "weather vaning" of tail, and a tad more up elevator. This is where you want to be just prior to touchdown. Again cross controlled.

These are best practiced at altitude first, as different aircraft have different cross controlled stall characteristics. The 172 produced some tail oscillation in a forward slip with flaps down, but, especially at 65 knots, got me home every time.

Forward slip and side slip are the same. It's just the objective, degree of control input, and alignment of the nose is different. Forward slips are to lose altitude. Side slips are to compensate for lateral drift while landing.

Whether it's forward or side slip depends on the amount of control inputs. A forward slip has enough rudder to point the nose to the side, with opposite bank to prevent turning, so that your path continues straight ahead in the absence of a crosswind.

A side slip uses rudder to keep the nose aligned with the original heading, and with bank applied to let the airplane "slide downhill" so to speak, into wind, the result being the airplane tracks along the ground where the nose is pointed even though there is a crosswind.

Yes, forward and side slips are perfectly identical. When used for landings the difference might just be a matter of which way you are looking out of the cockpit. Let's say we are on short final with a crosswind from the right that is about half of what control authority will permit. That is, rudder about half deflected to the left and right wing down to counter turning tendency, we are lined up with the runway, pointed along the runway, and not drifting left (or right either) just tracking right along the runway extension. A nice stable side slip (with a steeper than normal glide path due to the cross control if not carrying additional power). At that point we suddenly realize we are higher than we want to be so we smoothly apply a little more left rudder while smoothly increasing the right bank to add a bit of forward slip on top of the side slip to steepen the glide path. If done well the airplane continues along the same track, only now we are looking slightly to the right to look at the runway. Afterwards, having joined a more desirable approach path we decrease the rudder input back to where it was for the original side slip, while smoothly decreasing the bank angle to balance the reduced rudder and now we are once again looking right over our nose at the runway. Continue to the flare and touch the right main, left main and then I surely hope the tailwheel!

Forward and Side-slips are not quite the same although they are very similar.

When a plane is put into a slip it tries to roll out of the slip. For example if I apply right rudder this puts me in a left slip (relative wind hits the airplane from the left) and the plane will try to roll right. This is called slip-roll coupling. Also the slip will try and turn the plane in what John Denker calls a "boat turn" in his book.

In a forward slip, the turning tendency by the slip ("boat turn") is exactly counteracted by the bank of the wings (what John Denker calls a "momentum turn") so that the airplane does not turn. This means that the ground track remains the same but that the airplane will be in a high drag / low lift situation that allows the plane to lose altitude without gaining airspeed.

Side-Slips are similar except that the turning tendency of the wings and resulting slip are not equal so that the airplane will try to maintain a constant heading while in a slip. This is useful in a cross-wind landing where the cross-wind will try to blow the plane off center line if you not crabbed and trying to keep the nose aligned with the center line. The correct for the crosswind the airplane has to turn into the wind while keeping the nose aligned with the center line. This is accomplished by having a larger bank ("momentum turn") than degree of slip ("boat turn") so a little less rudder is applied in a side-slip than in a forward slip. Side-slips are usually defined as maintaining a constant heading during the duration of the slip.

In both instances you are cross controlled its just that in the slide-slip you will use a little less rudder.

Here is a graphic from ClayAviation showing the concept: 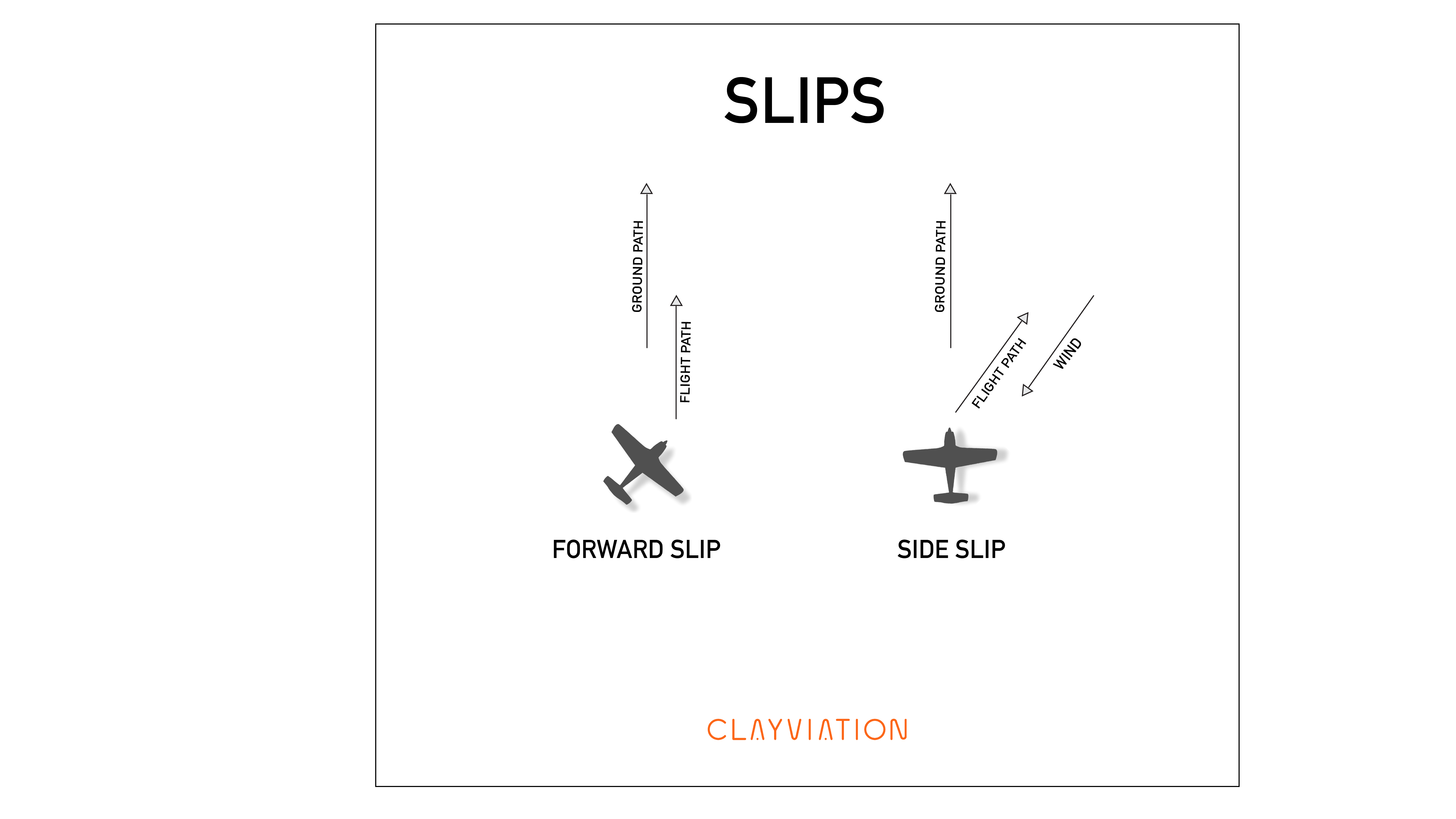 Not the answer you're looking for? Browse other questions tagged flight-controls pilot-technique maneuver or ask your own question.

5
Viable to slip onto the center line?
0
Forward slip dynamics