Do commercial flights continue with an engine out?

Do commercial flights continue with an engine failure? If you look closely at the attached picture it seems that one of the engines has a much smaller contrail than the other three. This seems to suggest that the aircraft is flying on three engines with the one at reduced (idle?) power. Is this normal? 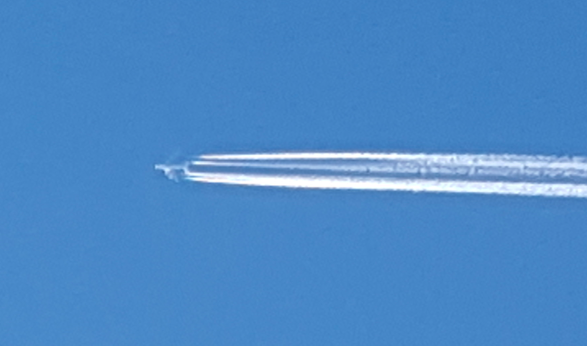 The image looks like four engines running at the same cruise thrust. The wake vortex is blowing the exhaust of the inboard engines down and the exhaust of the outboard engines out and in the perspective of this image this makes the lower two streams look merged while the upper ones further apart. Close behind the engines it is clear there is four of them and all have similar strength.

That said, a four-engine aircraft may continue on three engines as far as it has enough fuel and there is no other damage (so not if the engine flamed out after a big bang). With one engine out it can't maintain as high altitude, so it has to drift down to lower altitude where it flies slower and thus has shorter range. However if they have enough contingency fuel, they can continue to destination. Or return back to departure point, or proceed towards the destination, but land somewhere short. The dispatcher will consider the repairs, taking care of the passengers, rebooking them, the next flight the plane was scheduled for and other things and tell the pilots which is the preferred option.

In contrast a two-engine aircraft shall land as soon as possible. One engine out of two means there is no redundancy left and that is an emergency and shall be handled as such. Note that as soon as possible does not necessarily mean closest airport—the aircraft will cover over 100 NM during normal descent from cruise altitude, so if there are more options in about 150 NM, the pilots and dispatcher still get to choose.

Not the answer you're looking for? Browse other questions tagged commercial-aviation engine-failure emergency-procedures contrails or ask your own question.

51
Why are the lights inside commercial airplanes turned off during take off and landing?
8
What could cause a rear twin-jet's throttle to oscillate on descent?
5
Triple engine failure; which would you choose to keep left?
16
Is there any legitimate reason for adding momentary power when descending at idle with full carburettor heat on?
5
Why would one want to slow to V2 following an engine failure during takeoff?
0
Why could a Rotax 914 light aircraft lose power at 7000 feet?
44
Why are 'ghost flights' necessary?
31
Is this contrail from an airplane or a rocket?
1
Was it ever considered to optimise a jet to normally operate with one engine shut off?