Why would a glider have water ballast? If it is trying to stay aloft without an engine, wouldn't it be better to be as light as possible?

So I was looking at the description of a ASW 27 B glider and ran across this statement:

If a glider is trying to stay aloft as long as possible, wouldn't it be better to be light? Why would you add ballast and be able to dump it?

For example, image two identical planes A and B: A weights 50kg less than B. Assuming no wind (horizontal / vertical) and speed of best glide, both gliders will land at the exact same spot.

The lighter airplane A however will arrive later than B, as the speed of best glide is less than for B. In conclusion you can say, that additional mass only increases cruise speed, but not the travel distance.

Glider competitions are most of the time a route you have to fly in the shortest time possible. So that means, if you have a higher speed of best glide, you can fly faster in competitions.

The only downside to having a higher weight is, that your liftrate in thermals will be decreased and due to the higher speed it is harder to center the thermals.

It is to some extend also possible to shift the Centre of Gravity (CG) with the added load. The further it is to the aft limit, the higher your maximum distance is. This is because you will have less down-force from the stabilizer required. (If the CG is at the front limit, you will need to pull the control stick in order to fly level, therefore you have more drag). However I think this is rather a positive side effect and most of the time the water is used for flying faster.

Source: I am a glider pilot and currently doing my ATPL training.

In addition to the other answers, let´s look at this L/D(=E) diagram of the enticing DG-1000 from DG Flugzeugbau (but fear not, 'tis true for all gliders) :

The best L/D ratio is equal for different wing loadings, but is occuring at different speeds - the higher the load, the higher speed. You can also see that the minimum/stall speed is also higher for higher loads.

The next diagram shows the polar curve: 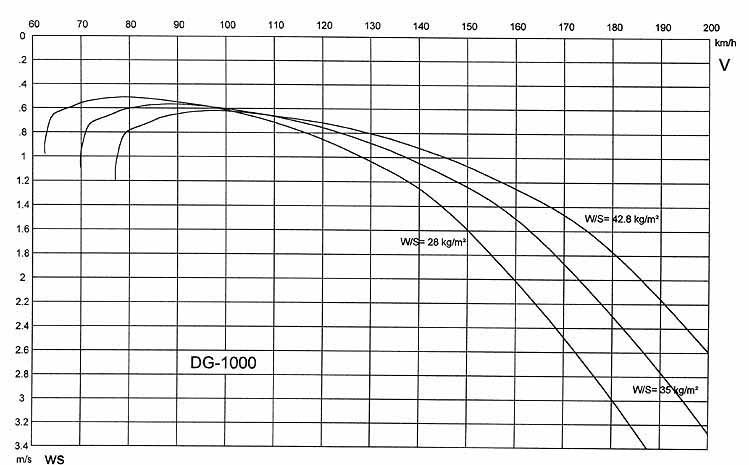 You can see that the minimum sink rate occurs at lightest load. The heavier the load, the longer you will have to circle in the same thermal for a given height gain.

The loading is a tradeoff between higher average speed and less efficient climbing. In case of strong thermals and/or long glide intervals, the optimum moves toward more, in weak conditions towards less or no ballast. The good thing is that you can dump water rather quickly (also partially), so that in a competition you usually tend to fill up (and dump in case) rather than start light (the Quintus e.g can take up to 250 liters!)

Aft ballast in the vertical tailplane is sometimes used to balance a forward CG caused by water in the wings - depending on your ship, partial dumping can be problematic.

Of course there are many philosophies and tactical debates concerning the "water or no water" dispute, but once you´ve overtaken an identical, lighter ship with full wings and no height loss, you get to see how much fun ballast can be (until the next thermal, that is).

I'm tuning in more than 3 years late because I'm not fully satisfied with the answers here. Yes, Lnafziger, when you want to stay up as long as possible, the plane should be as light as possible. But sometimes you need to get down fast: This is when water ballast is added.

Force is right: Water ballast speeds everything up. But there is more to it.

But there are two points which should be considered as well: 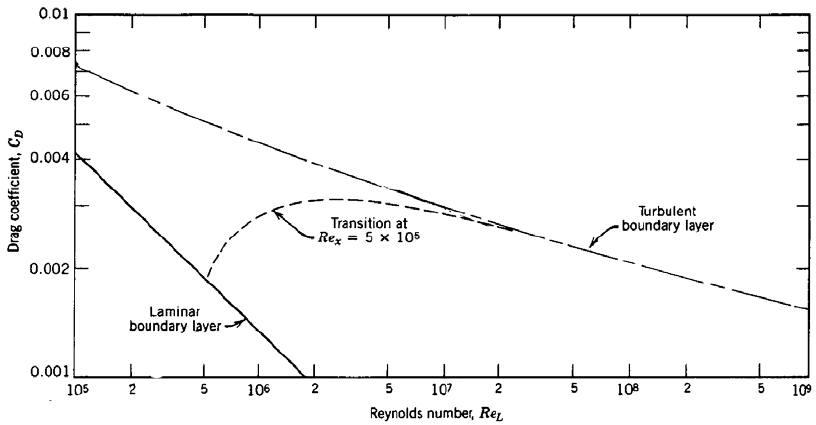 Friction drag coefficient of a flat plate over Reynolds number (picture source). The curve for a glider is between the fully laminar and the fully turbulent ones. Note the double logarithmic axes.

Force's answer is pretty much the answer, but also consider that mass = inertia. If you weigh more, you are less likely to be disturbed by any given outside force (turbulence). A lighter plane is more maneuverable but it will also bounce around a lot.

I cannot comment on how much of an effect the ballasts in question have on this for a glider, though.

Force's answer is very good. But the statement "additional mass only increases cruise speed, but not the travel distance", true for any one glide, doesn't take account of the fact that conditions suitable for soaring typically exist for a limited time each day - so increasing cruise speed definitely does increase distance.

StallSpin's point about reduced effect of turbulence on a ballasted glider is significant. This is best seen when flying a ridge, which in strong wind can be very rough. The ballasted glider, suffering less acceleration imposed by the rough air, can fly faster and lower, where the horizontal wind component is less, requiring a smaller crab angle.

Another factor the existing answers don't mention: if you are flying a two-seater glider alone, you might want to add ballast to correct your center of gravity.

Gliders are light, so a missing person can have a significant effect on the center of gravity. Two-seaters are optimized for flying with two people aboard. I've even seen lead ballast being used in the nose of a glider when a very thin and small trainee was flying with a heavy-set instructor in the back seat.

' no one flies at best L/D. Suppose the lift is strong and climbing is no problem. Ballast up to max gross. Cruise between thermals at 100 knots. Check the ploar diagram for 100 knots at max gross. It shows a sink rate of about 1.8 m/sec. Now check the sink rate at 100 knots with no ballast. It shows about 3 m/sec. That is 66% higher sink rate than at max gross weight. The ballast does in fact increase the distance made good for the same loss of altitude.

Not the answer you're looking for? Browse other questions tagged aerodynamics glider or ask your own question.

5
How does aircraft weight affect the glide performance?
37
How far can airplanes glide?
9
What determines the best glide speed?
4
What is the weight that is used to balance an aircraft called?
14
How are the glide polar and L/D ratio charts related?
6
What does this statement about steep descent mean?
3
Is (L/D)max achieved at a specific speed or AOA?
4
Does lift-to-drag vary with anything beyond geometry?
2
Could the wing struts on the SUGARVolt cause problems?
5
Would all these three things have the exact same effect on the flight duration of a glider?
see more linked questions…

26
Why does a missile have small wings but better agility than a plane?
1
Would it be possible to use a magnetron beneath glider plane to generate its own thermals?
5
Could Mach 1.4 be a better design point for SST?