What prevents aircraft with a tailcone APU from using tail-mounted airbrakes?

The BAe 146 and Fokker F-28, which are virtually alone among jetliners in lacking thrust reversers, compensate by using large, tail-mounted airbrakes to help slow the aircraft during descent and landing: 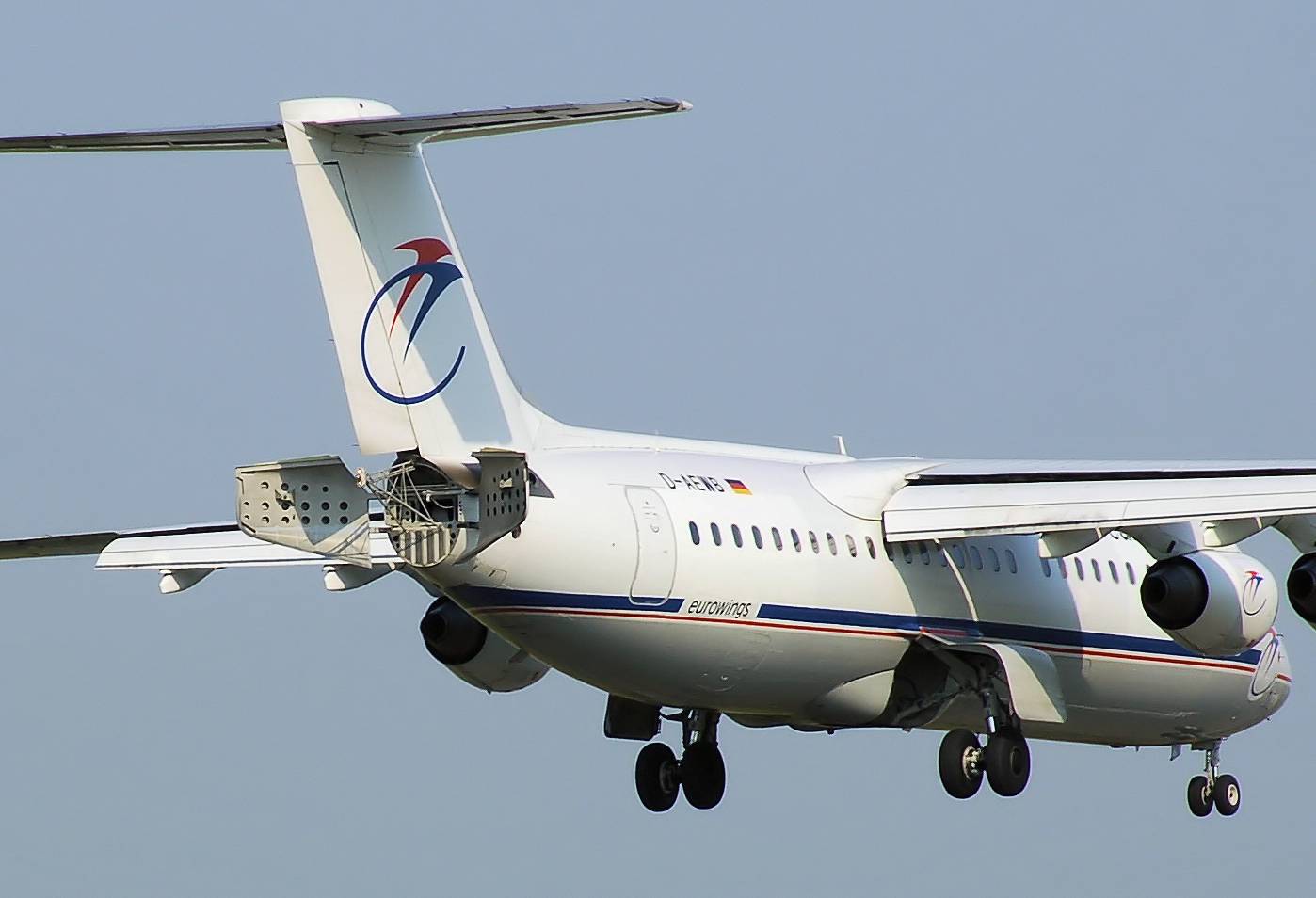 According to this answer to a previous question about why we don’t see this on more (and bigger) jetliners, the BAe 146 and F-28 are only able to use tail-mounted airbrakes because, unlike most jetliners, they lack an APU in the tailcone:

...Air brakes such as the RJ100 have only upsides, since they influence drag only, not lift. They're not used everywhere because the bit of fuselage where they are mounted usually houses an APU. 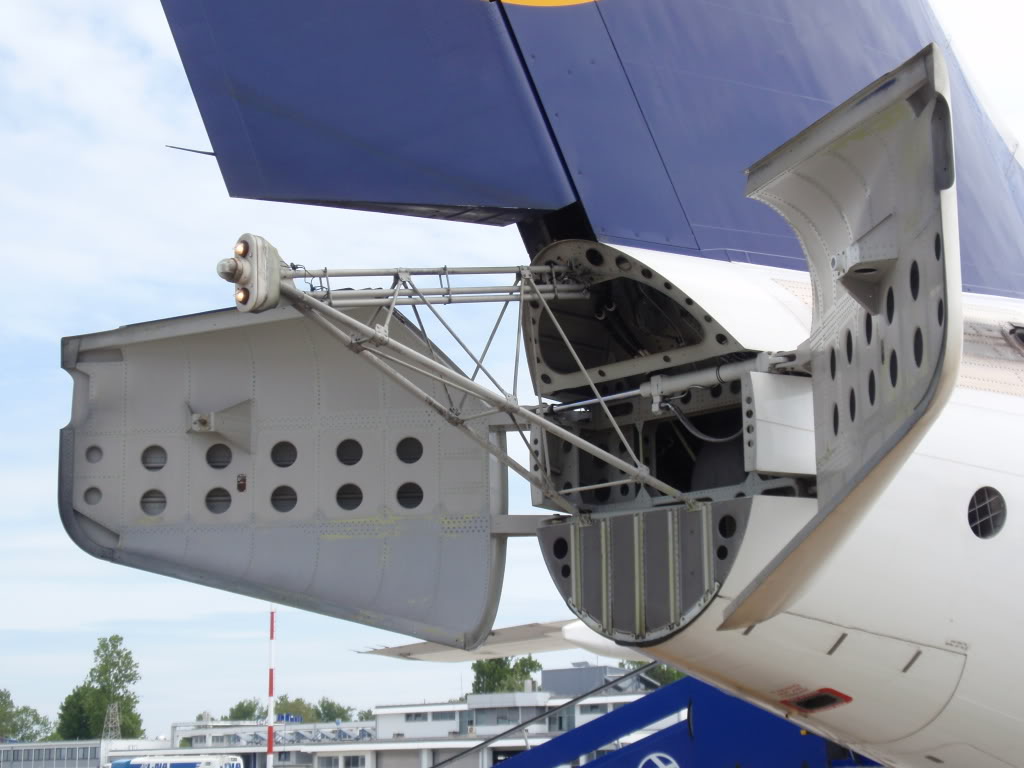 (Image by dtom_cro at Photobucket.)

As such, having a tailcone APU shouldn’t necessarily preclude having airbrakes on the sides of the tail; in the 146, the space between the airbrakes is basically empty, with only a light truss supporting the rear collision beacon, but it'd be easy to have something more substantial - such as, for instance, an APU-and-other-machinery-housing structure - in between the petals: 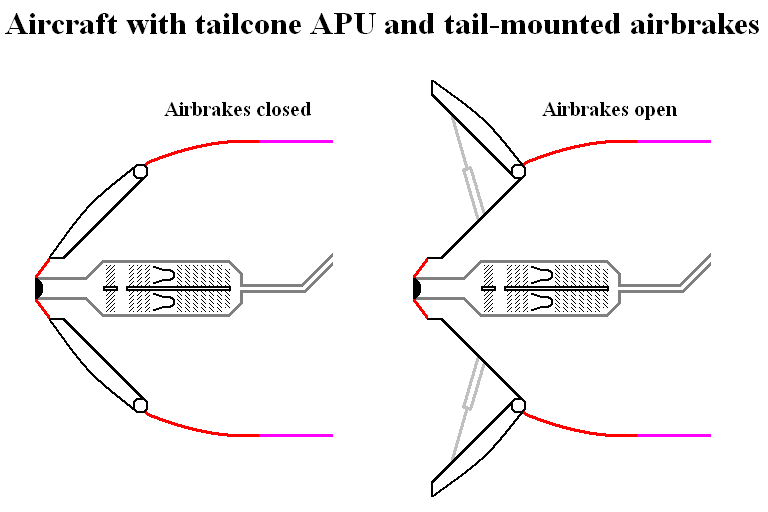 What am I missing here?

1: As @ymb1 points out in their comment, the BAe 146 does have an APU, but its APU obviously does not exhaust out the tip of the tail; that statement regarding APU exhaust placement refers to its location in the vast majority of jetliners in general.2

Yes indeed, it is possible to combine an APU with air brakes at the rear of the fuselage. The defining factor is not the presence of an APU, but that of a T-tail.

Aircraft with a conventional set of stabilisers mounted on the rear of the fuselage cannot use the tail cone for expanding air brakes, as deploying them would distort the airflow over the stabiliser.

Note that all aircraft systems add weight and money, and aircraft manufacturers look very closely at where to save weight and money. Do air brakes weigh and cost less than wing slats necessary when lift dumpers are used for airspeed reduction during landing? Two manufacturers of T-tail aircraft determined that it does, with the added advantage of reduced Angle of Attack during approach.

Thrust reversers aid in decelerating the aircraft after touch-down. The brakes of a large, heavy aircraft need to work disproportionally harder than those of a lighter and smaller aircraft such as the BAe 146 and Fokker 100. Braking efficiency is improved by deploying lift dumpers, and it may make sense to use these as air brakes during approach. Particularly if stabilisers mounted at the rear fuselage take away the obvious place for mounting the air brakes.

The airlines prevent them or: the airlines won't buy them if they were offered

The photos you have already show an APU in the tail section (exhaust on the starboard side).

When they are of no use, they're simply not added. Why are they of no use?

Well, pure air brakes (as opposed to speed-brakes/spoilers) have 1–2 functions (for jetliners):

Neither affect most jetliners (note that the babybus (A318) can be certified for steep approaches, and it doesn't need such an air brake).

The airlines would rather carry payload (paying load) and not bother paying for maintenance to regularly check and fix a novel item – not all airports are London City: high thrust-to-weight ratio is good for taking off from short runways and performing steep climbs from in-city airports for noise reduction.

There is no technical obstacle to building tail mounted air brakes and APU. The Fokker 70 has a tail air brake, APU and also thrust reversers and spoilers as seen in this great photo from airliners.net: Fokker 70 landing in AMS

Not the answer you're looking for? Browse other questions tagged aircraft-design apu tail airbrakes or ask your own question.

18
Why can't wing-mounted spoilers be used to steepen approaches?
11
Why do some aircraft (e.g. Avro RJ85) have rear-mounted air brakes?

19
Why is the APU located in the tail for almost all commercial aircraft?
8
How does flying with flaps differ from flying with airbrakes?
5
What type of engine/motor is used in aircraft APU?
10
Why would aircraft engines be mounted with "toe out"?
8
What prevents miltiary jets and turbo-props from being refitted with a turbofan?
3
What do the tail numbers on aircraft mean?
5
What are the differences between top and bottom mounted airbrakes?
14
What powers an aircraft prior to the APU being switched on?
4
Why do almost all overwing exit slides open over the trailing edge of the wings, and almost none over the leading edge?