Reading and thinking about this and this questions on space exploration stackexchange, I was wondering if the fairing could shape itself, so that it becomes one stable and steerable gliding element able to land safely, fully replacing the parachute / paragliding wing.

The idea is to hinge both halves longitudinally, and convert (by actuating & hinging) the tapered conic root part into trailing edge control surfaces or V-tail elevons, making the whole system flyable and steerable, eliminating conflicts between wind, paragliding wing and fairing large surfaces.

Is this concept practical in any way, could this thing fly and if not, why?

(let's assume both halves open for separation with payload, close for entry, open again in "glide mode" once subsonic) 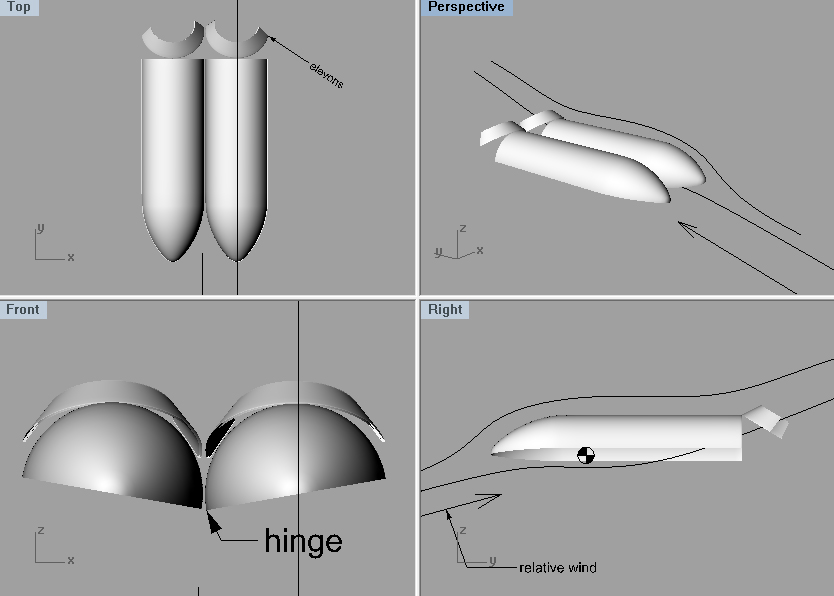 Currently the fairing is separated at about 100 km altitude, when the aero-thermal flux drops below 1135 W/m2. So it's not separated outside the atmosphere, the fairing still experiences noticeable drag.

That means the fairing has to be separated from the stage quickly, to prevent it crashing into the payload. With 2 fairing halves this is easy: the two halves can push against each other (using simple pneumatic cylinders or pyrotechnics), and both will move away from the stage in a straight line. By pushing with slightly more force at the top of the fairing, the halves are pushed in a direction where the wind will make sure halves are pushed farther apart.

If you were to hinge the fairing, you can't do that any more. You get two events:

You can't do this under aerodynamic load:

So you'd have to separate the fairing at a much higher altitude, which reduces the payload of your rocket by a significant amount. It also means the fairing is separated at a higher speed and becomes more difficult to recover.

Mechanical actions are always a risk. A hinged fairing adds to that risk: the timing is critical, and the actions have to be carried out under load from acceleration.

JWST deployment and Shuttle robotic arms have fewer time constraints, and the actions are carried out without a load.

Not the answer you're looking for? Browse other questions tagged aerodynamics unmanned-aerial-vehicle glider paraglider or ask your own question.

5
Can one become a CFI with a sport license?
5
What makes the loss of a flap track fairing strongly increase fuel consumption on Airbus planes?
2
Where could I find a MATLAB implementation of TCAS algorithms?
11
Could a larger consumer drone “take down” a passenger plane?
13
Would an aircraft with no ailerons, no elevators and no rudders be safely flyable?
0
When does root bending moment start to become important?