How does a single engine tail wheel landing gear airplane turn when it is on the ground?

Say Cessna 140 as in this video, look like no additional device to make it turnable when it on the ground. It is a single engine and a tail wheel landing gear. Then, how does it turn?

The rudder cable circuit is also connected to the steerable tailwheel through springs that provide a compliant connection. When you push a pedal it also creates a turn in that direction on the ground.

However the arrangement is unstable in the rolling plane. The main traction elements, the two front wheels, are ahead of the center of mass so the thing wants to switch ends, like pushing a shopping cart backwards. So there is no rolling self-aligning tendency like with a tri-gear and you have to actively provide "artificial stability" with your feet.

That, plus the kind of laggy response when the little wheel in the back is turned, with a springy connection, means there is usually a little foot dance going on while you are rolling. When necessary, you use differential braking to help things along if a steering input (a stab on the rudder) isn't having the effect you want.

Once you are rolling above about 30 mph, the rudder itself starts to provide most of your steering control.

Taildraggers take quite a bit more attention and skill to control while rolling, which gives them a bit of cachet that trigears don't, among pilots that are into that sort of thing (like me).

How it all works: In the exploded image below, Item 6, the steering horn, is connected to the rudder itself and it turns Item 26, the steering fork (or half fork in this case), which has the wheel on it (the springs are to provide some give to the connection to avoid over stressing things when the wheel touches down unaligned with the surface).

The interconnection between 6 and 26 has various parts that make it work a bit like a breakout clutch; 6 can turn 26, but if 26 is turned by an outside force above a certain point, its connection to 6 releases and it can caster or swivel freely until they line up again and re-engage.

So when you are rolling and work the pedals, the pedals/rudder turn the steering horn (Item 6) and it turns the fork (Item 26) with the tire as if they were a single unit and the airplane turns. If you are nearly stopped and want to spin around to park, you lock one of the brakes and this puts so much side load on the tailwheel it breaks the fork out of its connection to the steering horn and it's free to swivel.

Later when you are rolling straight and the steering horn and tailwheel are lined up, they lock together again and you have steering control back. The internal breakout mechanism has to be set up so the breakout force required isn't too high (hard to make swivel) or too low (starts swiveling freely when you don't want it to). You don't want it to start swiveling while you are still rolling at speed and using it for steering, or, like shoving a shopping cart backwards, around you go! (It's called a ground loop)

This is a "steerable/free castering" tailwheel and variations of this type of system are used on probably 95% of GA tailwheel airplanes out there. When steering with this system, brake can be used as required to assist with steering because the steering authority is limited compared to a nosewheel but you generally only apply brakes if you really have to, to avoid wearing the brakes out (the springy nosewheel connection in a Cessna 150 is similar). 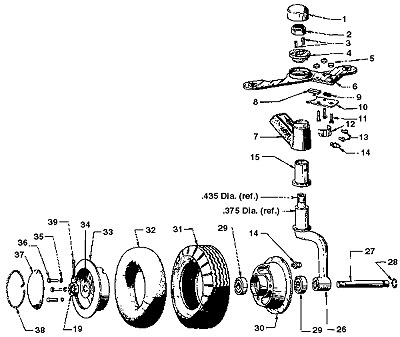 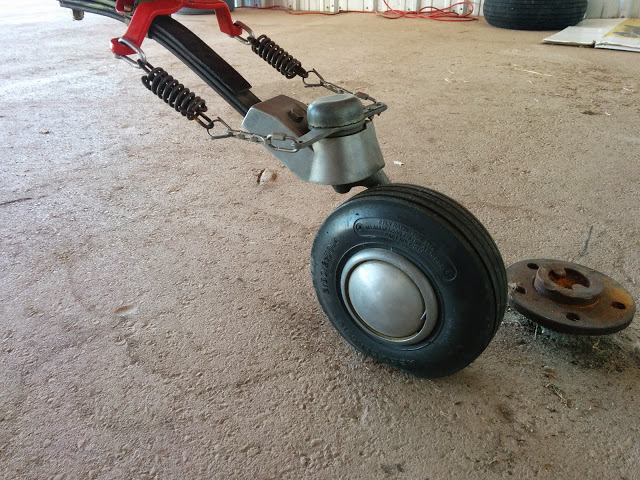 Mainly differential braking is used to control direction while taxiing at low speed on the ground. Above a certain airspeed during take off and landing ground roll the rudder is also effective.

Not the answer you're looking for? Browse other questions tagged aircraft-design aircraft-systems aircraft-physics or ask your own question.

14
What are the advantages and disadvantages of having landing gear doors?
9
How does the nose wheel lock on the Robin DR400 work?
14
How is the 737 main landing gear protected from weather?
4
How are forces on the landing gear reduced or compensated for at touchdown?
2
What were the "flap pump" and "gear pump" on the F-4E Phantom II?
6
What is the maximum weight on the main gear of a large aircraft at rotation and touchdown?
5
What are the advantages and disadvantages of tail wheels that cause modern airplanes to not use them?
4
Why doesn’t the A320 family suffer from the same design constraints regarding engine placement/landing gear length as the Boeing 737 family?