Why would one want to slow to V2 following an engine failure during takeoff?

Reading about the crash of American Airlines Flight 191, the proximate cause of the final loss of control was the pilots' reduction of the aircraft's airspeed to V2, in compliance with the published procedures for a single engine failure after V1 during takeoff in a DC-10-10; unbeknownst to the pilots, the damage caused when the #1 engine separated from the aircraft had caused the left wing's outboard slats to retract, decreasing the left wing's stall angle, with the result that decelerating to V2 required the aircraft to fly at an angle of attack at which the left wing stalled.

But why would one even want to slow to V2 in the first place? Even if we, like McDonnell Douglas, ignore the possibility of an engine separating from the airplane and damaging it to the process, there are still good reasons to go faster, not slower:1

What good reason could there possibly be for eroding your already-degraded safety margins yet further by slowing to V2 following an engine failure?

1Not that doing so was justifiable of their part (it wasn't, as the NTSB accident report makes clear).

Simply put, V2 is the speed that guarantees the best angle of climb on one engine. Any slower or faster increases the risk of hitting an obstacle.

There are 2 main categories of drag - induced drag, and parasite drag. Induced drag is an unavoidable consequence from lift and largely shows itself in the form of wake vorticies. Induced drag is largest at high angles of attack - i.e low speed.

Parasite drag includes drag from things like skin friction, rough surfaces, wires, and so on. Parasite drag is largest at high speed.

If you plot both categories of drag together, you end up with a chart like this: 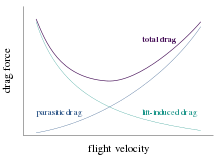 The aircraft must provide enough thrust to overcome the total drag, so this can be renamed the thrust required curve. If you picture a horizontal line across the top of the graph, that would represent the thrust available for a jet engine. The speed which provides the biggest gap between thrust required and thrust available, or excess thrust, is the speed at which the aircraft climbs at the steepest angle.

But if you lose 50% of the thrust available, then that horizontal line moves down a lot. If you are going too fast, the total drag might be more than the available thrust, forcing the aircraft to descend.

That's why V2 exists, to give the pilots a guarantee that at that speed, there will still be enough excess thrust to climb at the steepest possible angle.

It's true, slowing to V2 doomed this flight. But uncontained engine failures, especially ones that damage the wing, are extremely rare, and more rare than that is a dual engine failure for whatever reason. The powers that be decided it is safer to give pilots the V2 target so they don't mess up in an already high-workload scenario and hit a tree.

V2 by definition is the speed an aircraft will climb with an engine failure. Notice this does not mean further reducing power. The aircraft will pitch to maintain V2 as per procedure with whatever thrust it has.

The crux of the question is how close V2 is to stalling speed in the event of a multiple malfunction. In this case the slats retracted when the engine separated. This was probably an unforeseen scenario. Procedures and design certainly warrant review.

Not the answer you're looking for? Browse other questions tagged takeoff engine-failure emergency-procedures v-speeds or ask your own question.

6
What are the V-Speeds used during a normal takeoff in a multi-engine airplane?
17
Can an aircraft continue flying and land safely following an engine failure?
6
What would happen if one of the engines failed during takeoff and other engine is on full power?
3
Is pilot alerted of any physical or structural failures?
2
Can airline ignore or get exception from V1 and other safety rules?
7
What is the typical procedure if an engine fails during a vertical takeoff?
6
Why not separate out the two definitions of V-1 into two separate Vspeeds?
15
Why does the Eurofighter Typhoon pitch up on brake release?
3
Why aren't quadjets required to remain controllable after a sudden, simultaneous failure of two engines on one side?
15
How controllable is the 737 in single-engine manual-reversion flight? Is it controllably landable (or go-around-able) in this condition?