Can Ospreys land without running engines?

I just have seen a video of a demonstration of an Osprey V-22. While this is an impressive aircraft I wonder whether this might land with failing engines (with the large "propellers" probably hinder proper gliding).

What would a pilot do in the following cases:

Welcome to AviationStackExchange and to provide a short answer to your question, yes there are autorotation measures that are similar to those featured on helicopters. The basis for most of my answers pertain the unique drive shaft system, which allows for redundancy between proprotors, something other twin-engine fixed wing aircraft usually lack, so here's a diagram for some reference: 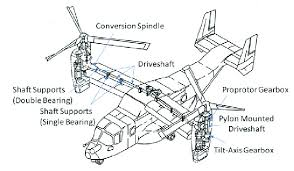 Not the answer you're looking for? Browse other questions tagged military engine-failure emergency-procedures v-22 or ask your own question.

23
How is it safe for helicopters and Ospreys to refuel in mid-air?
17
Can an aircraft continue flying and land safely following an engine failure?
9
Could the Concorde reliably land with all engines out?
4
What happens to cabin pressurisation when the engines fail?
3
Are there any privately owned V-22 Ospreys?
3
Why aren't quadjets required to remain controllable after a sudden, simultaneous failure of two engines on one side?
15
How controllable is the 737 in single-engine manual-reversion flight? Is it controllably landable (or go-around-able) in this condition?
5
What could cause both engines on a 737-200 to fail at nearly the same time?