What is the difference between a P-51 Mustang and an A-36 Apache?

Both were made by North American Aviation and the planes were almost twins - the A-36 having a ground attack role while the P-51 was a fighter. Are there any noticeable differences between the two?

the ground-attack/dive bomber version of the North American P-51 Mustang, from which it could be distinguished by the presence of rectangular, slatted dive brakes above and below the wings

This website also lists the same mods as well as some other fun facts.

This website lists two other features noteably the vent window which is not mentioned elsewhere.

Please ... the A-36A has to have more wrong "information" on it both in print (as in books and magazines) and online in articles, photos and videos, than ANY other WWII aircraft.

Next, and THIS one is, for some reason, the most-repeated mistake of them all: It's called the "Apache" in books, magazines, the Internet and on videos (and, as a result, in conversations between warbird nuts in person and in social media). The National Museum of the U. S. Air Force even had their A-36A "mislabeled" on the sign in front of it, until after I contacted them. They corrected it to the only official name that it ever had, "Mustang," in September, 2018.

Here is an article that I wrote earlier this year. Right after it was published, I received even MORE documentation from the Boeing Historical Archivist that, while it was superfluous (as in, "not really needed"), it verified beyond ANY shadow of a doubt, that "Mustang" is the only official name that the A-36A ever had.

OH, and the only armament on the A-36A was the .50 Cal Browning Machine Gun - two were mounted in the nose/cheek position, and two in each wing. The 20 mm cannons were installed ONLY on the NA-91 aircraft, the first aircraft actually designated "P-51" (no suffix letters or numbers at first). THEIR official name, in the USAAC/USAAF from late 1941 until 13 July, 1942 was "Apache." After that date, anything made by NAA that even "looked like a Mustang" was called "Mustang," officially. The A-36A came along AFTER that date in July, so it was a "Mustang" from "birth."

If I knew HOW to attach images of documents to this post, I'd gladly do it. The "Images" thing above seems to be only for images that are online, and my images are on my hard drives.

I will state that my documentation includes: scans of North American Aviation documents and newsletters and a Telegram from Dutch Kindelberger to Col Ennis, dated 13 July, '42, before the first A-36A was built; references from the most-respected "Mustang Authors" (Robert Gruenhagen and Ray Wagner); references from the US Government.

I'm actually a humble person, so if someone would tell me how to attach MY images (without first getting them online, but directly from my HDDs), I'd be most appreciative.

The A-36 was a P-51A configured for ground attack with minor add-ons like the dive brakes and bomb racks (and 20mm cannon on some). Both had the Allison engine which was not suitable for high altitudes. The P-51 B and later had the RR Merlin. Lots of other detail differences, but the engine is the main one when thinking of the A-36/P-51A vs P-51B and subs.

I have a link to my article from almost 2 yrs ago at TheHangarDeck.com. I shall try - TRY - to attach scans of images of Primary Source Documents that firmly establish the "Mustang" name for the A-36A, that are actually ADDITIONAL documents that substantiate my point that the A-36A was never called "Apache" officially - EVER - during the WWII years. Certainly, the pilots and groundcrew of the A-36A in the 27th Fighter-Bomber Group serving in the MTO called the A-36A "Invader" and actually petitioned NAA to change the official name to "Invader," but THAT name was already given to Douglas Aircraft Company for their A-26 Attack/Light-Medium Bomber. I've reread the above and I do NOT see anything insulting or condescending --- if anyone's offended, then I did NOTHING to try to do so.

Let me try to attach those two images - scans of an NAA document in the form of a Telegram directly from Dutch Kindelberger, HIMSELF, to the USAAF's Chief of Public Relations, and the cover of the Parts Catalog for the A-36A. 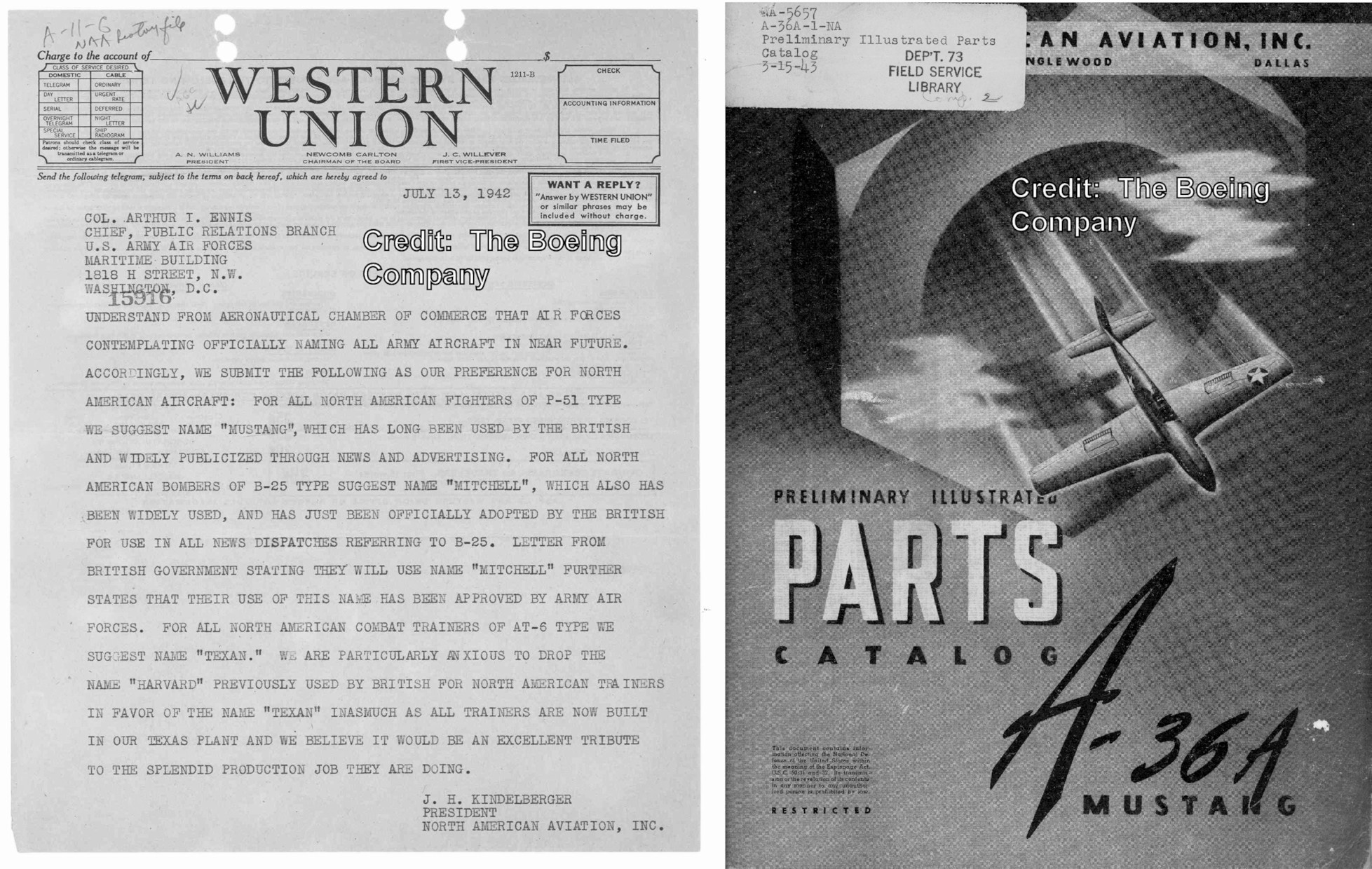 Left Side: Telegram dated 13 July, 1942 Right Side: Cover of A-36A Parts Catalog (Both supplied by The Boeing Company, owner of both images and all credit due to them)

The A-36A's main differences from the P-51 or Mustang 1 are the dive breaks, reinforced wings, nose mounted browning 50 cals, and others. The A-36 is technically a variant of the P-51. It is heavily modified but remains extremely similar. Also, contradicting @Tom Griffith, the first P-51 flew on october 26th, 1940. The A-36A apache, on the other hand, was first flown in 1942, meaning that the P-51 was actually built before. The later models of the p-51 (B,C,D,k, H...) used the merlin engine, the apache however retained the allison.

Not the answer you're looking for? Browse other questions tagged p-51 or ask your own question.