If Floyd Bennett Field failed due to its remoteness and isolation, how has JFK been so successful?

Floyd Bennett Field was built at the end of the 1920s in order to give New York City its own airport and avoid having to rely on Newark; however, despite its superb airport facilities, Floyd Bennett Field was never a commercial success, being cursed by the relative remoteness and isolation (compared to Newark) of its location in far southeastern Brooklyn. As a result, when the airlines and the airmail stayed at Newark, LaGuardia Airport was built in northern Queens, quickly becoming much more successful than Floyd Bennett ever was, and remaining New York’s primary airport until 1948, when Idlewild Airport (JFK from 1963) opened in far southeastern Queens. Idlewild/JFK, in turn, quickly came to overshadow both LaGuardia and Newark, and has been the primary airport of the New York metropolis ever since.

But JFK is even more remote than Floyd Bennett! 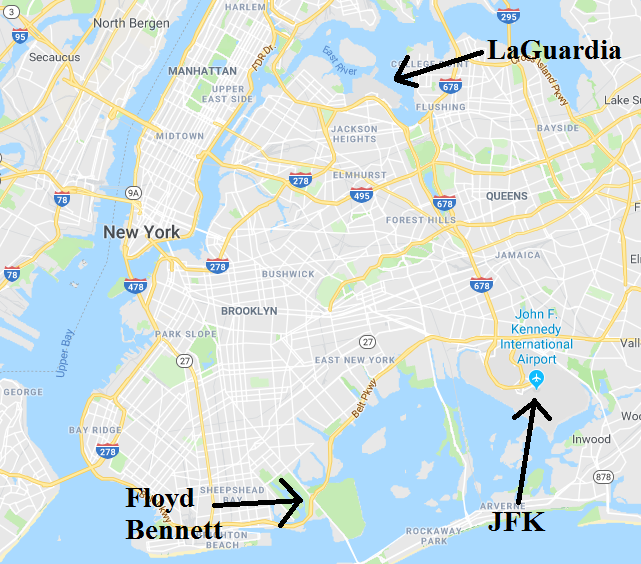 If remoteness killed Floyd Bennett, why hasn’t it killed JFK?

If remoteness killed Floyd Bennett, why hasn’t it killed JFK?

Because remoteness did not kill Bennett.

The opening of LaGuardia airport in 1939 absorbed all the traffic, then in 1941 the Navy took over Bennett and banned all commercial and GA flights. After WWII it was meant to return to commercial service to handle the excess traffic from LaGuardia.

(Idlewild was still being built – bigger land area, longer-runways potential, hints of the jet-age in the air, etc.)

But the Port Authority and the Navy could not agree on the cost of moving the Navy's facilities.

The controversy between the Port Authority and the Navy that has kept commercial traffic out of Floyd Bennett Field in Brooklyn narrowed down yesterday to a \$450,000 question of price. The Navy is asking \$1,200,000 to transfer its facilities and the Port Authority is standing by its statement that it could not spend more than \$750,000 for that purpose. (nytimes.com, 1947)

Not the answer you're looking for? Browse other questions tagged airline-operations airport aviation-history or ask your own question.

10
How long has the term “situational awareness” been used in aviation?
12
Has there even been a case of pilot incapacitation due to food poisoning?
11
Has the “Foote takeoff” technique really existed, and how did it work?
1
Why do most U.S. cities with multiple airports try to concentrate airline operations at just one airport instead of spreading out the load?