How to calculate the power required during transition from VTOL to fixed wing?

In a VTOL, I have calculated the power required for take off and cruise which was not difficult at all. Between take off and cruise, there is a phase where the VTOL has to transition by tilting the rotors from 0 to 90 deg. I am finding it hard to calculate the power required for this transition. I feel this is very important because it consumes more power than take off since it is creating lift (hasn't reached the minimum velocity for the lift requirement) for balancing weight and also needs to provide thrust for forward motion. Given to me are:

What are the factors considered to calculate the power required for transition? Please note: Make as many assumptions/approximation as you like. I just want a simple formula for a basic understanding.

The craft will speed up until aerodynamic drag = forward thrust:

Note that it is usual to express the drag equation relative to wing area S.

A simple real-time approximation in a spreadsheet would look like underneath. 9810 N thrust pointed back 10 deg results in sin10*9810 = 1703 N forward thrust, which takes about 300 seconds to speed up the craft to 97 m/s. Of course, because of the aerodynamic lift the craft climbs, changing AoA and creating induced drag etc. The simulation should be extended with reduction in rotor thrust proportional to aerodynamic lift. But I hope the gist of things is clear enough. 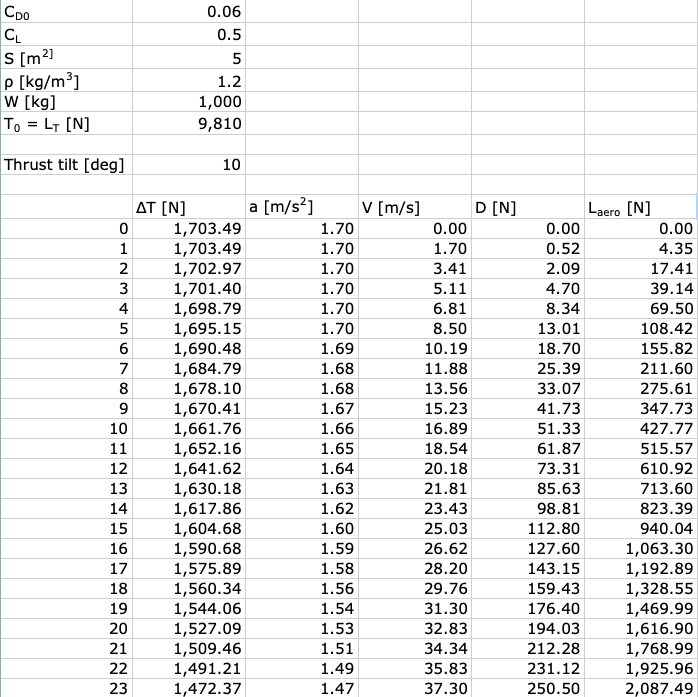 The lift of the wing is proportional with the square of the aircraft speed, see the lift formula. That tells you how much vertical thrust you need at each speed.

The horizontal thrust leads to the speed you can reach at that tilt angle, but you need the total drag of the aircraft to calculate this. That's info you don't have, it seems.

Integrals give me headaches, so first I'd calculate these parameters for let's say 10-degree increments in tilt angle and plot these, perhaps a curve will become apparent in the plot.

Not the answer you're looking for? Browse other questions tagged aircraft-design aerodynamics rotorcraft vtol tiltrotor or ask your own question.

2
How to calculate variable pitch propeller parameters?
5
What are the factors required to estimate the minimum required power for an experimental aircraft of a specific mass?
1
How bad is the efficiency of jet engines under low loads?
5
How to calculate lift and drag coeffecients for VTOL aircraft in the takeoff stage?
2
How do I calculate the total cruise power from the propellers accounting for the losses?
2
How to design a near vertical take off airplane?
3
Does a dual-rotor helicoptor like the Chinook transition from hover to forward flight differently than a single rotor helicopter?
2
What are the disadvantages of a Tail providing lift? (tandem-wings included)
2
What methods are used for calculating maximum takeoff windspeed of a helicopter?