Can hydrogen gas be an alternative fuel source for a gas turbine engine?

I want to do research for an alternative fuel source for a commercial aircraft that will reduce the cost for flights.

Will the hydrogen gas be ignited in the combustion chamber and produce enough thrust to power the aircraft for flying? As for the problem that people had stated before for storing the gasses in a high pressure gas tank, can an increase in the aircraft weight be reduced by replacing the tank with usage of a hydrogen generator instead of a whole bulky tank that will weigh more?

By using a generator which converts water into hydrogen gas, we can just use water as our main fuel source which is more cost efficient?

In a flame of pure hydrogen gas, burning in air, the hydrogen (H2) reacts with oxygen (O2) to form water (H2O) and releases energy. If carried out in atmospheric air instead of pure oxygen, as is usually the case, hydrogen combustion may yield small amounts of nitrogen oxides, along with the water vapor.

Yes, and it has been demonstrated 30 years ago on the Tupolev 155. This is/was a hydrogen-powered version of the Russian Tu-154B tri-jet. Only one has been built and has since been retired after demonstrating the use of liquid hydrogen in 5 experimental flights. In total, the Tu-155 performed about 100 flights with several fuels, among them hydrogen and liquefied natural gas. 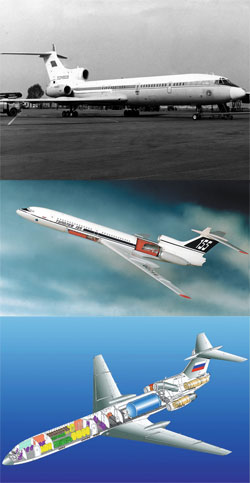 Hydrogen is actually better for a jet engine: It is gaseous at normal temperature, so there is no delay for the evaporation step to happen as there is for liquid fuels before mixing and combustion can start. Also, hydrogen burns in a wide variety of mixing ratios with oxygen, so flame-outs are much less likely, making a smaller combustion chamber possible.

The downsides, of course, are storage and the small molecular size of hydrogen. It is very hard to contain, and it needs big volumes to store a given amount of chemical energy. Pressurized storage at 200 bars holds only 18 kg/m³ or 45 times less than kerosene. With 142 MJ/kg, hydrogen holds three times as much chemical energy than kerosene, but then the volumetric efficiency of kerosene is still a factor of 13.3 better.

Cryogenic storage swaps pressure for low temperature: Below 33 K and above 13 bar, hydrogen becomes a liquid and storage density increases to 30 kg/m³. Still, cryogenic hydrogen storage needs 4 times the volume of the same amount of energy stored as kerosene, plus the isolation and the energy to cool it down and compress it.

Using water as the carrier and splitting it on-board to hydrogen and oxygen is a nonstarter. Electrolysis takes vast amounts of electric power, so instead of just water you need to carry water plus (big, heavy) batteries. If you use batteries, you're better off just using electric motors to drive the turbines, that would be lighter than an electrolysis setup.

A better alternative would be converting hydrogen and carbon monoxide into liquid fuel on the ground (using the Fischer-Tropsch process) and burning that in your engines.

Hydrogen works just fine on rockets. However "just fine" on rockets doesn't mean it is practical on an aircraft.

The only way you can utilize $\mathrm{H}_2$ is storing it cryogenically. This is because $\mathrm{H}_2$ goes supercritical at $-240\,{}^\circ\mathrm{C}$, and no matter how hard you squeeze it beyond this temperature it would refuse to liquify and thus remain a low number density fluid. Of course, you could store it as a supercritical fluid, but that would require an incredibly heavy pressure vessel.

If you agree that you must store $\mathrm{H}_2$ cryogenically, then take a look at this. What do you think are your odds of carrying all this hardware onboard an airplane and still have usable payload?

Your trouble doesn't end there. To burn $\mathrm{H}_2$ as a fuel, you must move it out of the tank and into the engine. And to do that, you must use some sort of pump, and a pump must have some moving parts that are immersed in the liquid that it's supposed to pump. And here comes the trouble: you are pumping a liquid that boils at $-240\,{}^\circ\mathrm{C}$, and even the tiniest surface imperfection, the tiniest burr, the tiniest machining mark, the tiniest grooves and troughs on the surface of the immersed moving pump creates minuscule surface vortices, and these vortices heats up the liquid $\mathrm{H}_2$ near the part's surface so that it boils, forming bubbles, which merge, split and collapse thousands of times per second, and the minuscule pressure pulses sent out by these events impacts on the already extremely cold thus brittle moving parts of your pump, chipping it almost instantly, and after chipping the damaged pump will stir the entire stream of liquid $\mathrm{H}_2$ to a violent boil and blow itself off.

Liquid $\mathrm{H}_2$ is the most difficult fuel to handle, and even rockets steer away from it whenever possible. It is one thing to use it on something that only lasts for a few hundreds of seconds, quite another on something that lasts tens of thousands of hours.

EDIT: I almost forgot. Hydrogen, its molecule being so small, diffuses like crazy, even within the "solid" objects to the naked eyes like steel, titanium, copper, and aluminum. So all metal parts are inevitably impregnated with hydrogen with use and form hydrides with it, causing it to decrease in strength. So good luck with the whole fuel system! The entire aircraft will be a literal ticking time bomb.

Hydrogen works just fine as turbine fuel, and does so in space launch turbopumps. Achieving full efficiency, power, and engine life on hydrogen will require tweaks to a pre-existing engine, of course.

On the environmental side, H2 normally burns hotter than hydrocarbons, which produces more N2O, but combustion temperatures can be regulated, and have to be to match turbine life specs.

Storage is the problem. All generators based on storing hydrogen in room-temperature liquids/solids share the problem of considerably worse net:tare ratios than liquid hydrogen tanks. LH2 adds cost and maintenance with cryogenics and still falls short of hydrocarbon energy density.

You can't get net energy by extracting H2 out of water, as that consumes all of the same energy that H2 produces in combustion, plus the losses. Energy cannot be created, only converted. For heat to be created to drive the engine, energy has to be lost elsewhere. In this case it's lost in joining two chemicals, which store potential energy (combustibility) in their state of separation.

If you had a different energy source (actually energy converter) on board, e.g. nuclear, you could use its output to propel the aircraft without the need for combustion.

The problem is that generating hydrogen inflight is even more awkward than storing it. The component chemicals you combine to make hydrogen are much, much heavier than the hydrogen itself (hardly a surprise since hydrogen is by far the lightest atom)... and both heavier and more expensive than getting the same energy out of petroleum fuel.

What's more, back on the ground, you would need to spend energy to create the component chemicals (to "charge them up") would require electricity or heat, which would require burning other fuel, due to efficiency far more fuel again than the airplane is able to harness.

If the public policy motivation is to reduce fuel spent by airplanes, the greenest way to do that is effective high-speed-rail systems. Downtown London to downtown Paris is so stacked in favor of rail that I can't believe there are any airflights at all. High speed rail powers directly off electric, efficiently making the most out of green electric sources such as wind or solar.

It may turn out that compressed hydrogen will be excellent for fixed structures where storage volume is not as great an issue. Transportation such as trucks or aircraft greater favor higher energy density, or liquid fuels. Exotic applications in rocketry favor the higher specific impulse per gram of hydrogen compared with hydrocarbon (more bonds to oxidize per unit weight).

Amazingly, conversion of water to hydrogen may make it easier to transport water over long distances as a convertible gas rather than energy intensive pumping and/or building canals. A 5 psi hydrogen pipeline will cross any mountain range, and, at its destination, provide both fuel for heating/electricity and one gallon of water for every pound of hydrogen burned.

However, issues of volume and extremely low boiling point may limit its applications for large scale transportation. Liquid natural gas may be a better bet.

By using a generator which converts water into hydrogen gas, we can just use water as our main fuel source which is more cost efficient?

Splitting water into hydrogen and oxygen, done at 100% efficiency, takes exactly as much energy as you get back from burning that hydrogen in the oxygen, at 100% efficiency. Where are you getting all that energy from to split water? Your plane would be lighter if you just used that energy source directly to propel the plane and didn't waste time converting water to hydrogen and oxygen and back to water.

In reality, you don't have 100% efficiency, so the water-to-hydrogen-and-oxygen-to-water equipment isn't just dead weight: it's weight that's actively using up some of your power.

Google "cryoplane final report" or just cryoplane for a full answer. Jet liners using cryogenic hydrogen are feasible but won't be cheap unless hydrogen becomes very cheap. It might do that as renewable energy sources like wind and solar could generate hydrogen by electrolysis when their electricity output is greater than demand the time.

I guess the first Aircraft flying with a Turbine, the Heinkel-178, with the Turbine of Hans Joachim Pabst von Ohain, patent US2256198, inventor stated M Hahn, had the jet engine tested with Hydrogen as fuel, the issue with Hydrogen may be storage. www.SAE.org has documents about Hydrogen as Automotive Fuel, no need being member to purchase.

I was wondering the same thing. Here’s my idea. Before the flight, use electrolysis to get a lot of hydrogen from water. Then compress the hydrogen into a smaller container because its a gas so you can do that. Use that as your fuel for the engine instead of water, and use the oxygen in the air to combine with the hydrogen instead.

So you would have your engine suck in air, combine it with hydrogen, use a bit of electricity to light it with a spark or something, then shoot it out the back of the engine.

Also I’ve never done anything with jet engines so I have no idea if this would work.

Not the answer you're looking for? Browse other questions tagged engine thrust or ask your own question.

-5
Is water a possible fuel for jet engines?
12
Why is the combustor volume of a jet engine decided by altitude?

8
Can a Kline-Fogleman airfoil be used for engine turbines?
1
For how long can a single-engine turboprop safely run the engine at idle?
0
Why does a turbine engine compressor ratio affect stagnation pressure?
1
Is overall pressure ratio same as compressor pressure ratio for a gas turbine engine?
1
How to measure thrust produced from combustion chamber of Gas Turbine Engine?
4
How can the effects of hot corrosion and salt deposits from sea water spray in gas turbine engines be negated/prevented?
2
Is there an equation for jet engine efficiency as a function of turbine inlet temperature?