What material is used for the skin of a modern fighter jet?

Modern passenger jets/airliners use aluminum 2 to 3 mm thick as their skin, their maximum speed is 900 km/h give or take. Modern fighter jets travel at twice that speed on average.

What material is used to make their skin. If it's aluminum, is it thicker and why? Is it because of the extra cruising speed?

If specifics are required, I ask about the F-35.

"Modern fighter jet" and "F-35" are not synonymous. The F-35 is just one out of ~20 fighter jets currently in production, and it's not representative of the rest of them.

The majority of fighter jets have their skin made out of aluminum, usually 7000 series. Thickness is 1.5-3 mm, a bit thinner than passenger airliners have. Fighters rely on their internal longerons rather than skin for global strength, so the skin is lightly loaded and not structurally essential. It then doesn't matter much that aluminum's strength falls greatly at elevated temperatures.

There is also less force put on the airframe at high speeds than it can handle. Fighters are only able to maneuver well at 200-400 knots, below the speed of sound. On average, they travel at Mach 0.7-0.8, similar to passenger jets or slower, as they're not as aerodynamically clean. Supersonic flight is generally only used for interception, in a straight line, for short periods of time, to chase another aircraft.

The F-35 is different. Its skin is made out of CFRP throughout. The matrix is CYCOM 977 epoxy resin in most fuselage sections, CYCOM 5250 bismaleimide resin in the wings and some hotter surfaces. The reinforcement is intermediate modulus carbon fiber, mostly Hexcel IM7, with 550-700 ksi tensile strength. Bismaleimides generally offer better heat resistance than aluminum; epoxies are a bit less or as heat resistant as aluminum, depending on the specific alloys and resins being compared.

That said, the F-35 has a lower top speed than most other modern fighters. Aluminum has proven to handle the higher heat stress in faster fighters just fine. But CFRP is a bit lighter, less prone to permanent bending than metal, and provides much better adhesion with the outer layer of resin-embedded RAM. The latter two properties make composites essential for VLO (all-aspect stealth) aircraft.

P.S. More on various resins: What are typical resins used in carbon fiber for aircraft? Are any resins impossible to recycle?

The F35's skin consists of a/several composite(s). Although it's obviously classified, I suspect the main reason it's chosen has something to do with stealth rather than strength. Interestingly, there seem to be more information about the F22 than F35, which is supposed to be, err, more secretive? For example, the F22's airframe bulkheads and twin booms are known to be constructed from titanium, and there are aluminum elements in its wings, and its skin is composite as well. That's pretty much all that's let on.

If you are asking for some not-so-secretive fighters, they are made from more mundane materials, not that these are any less expensive: 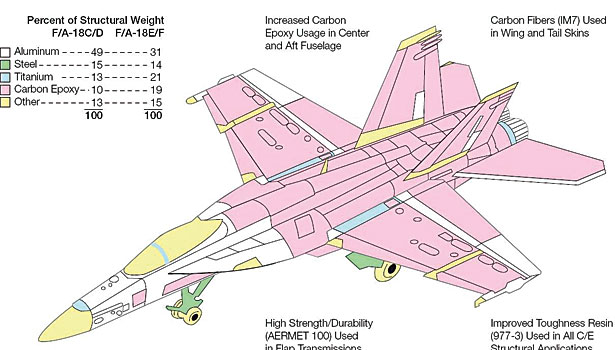 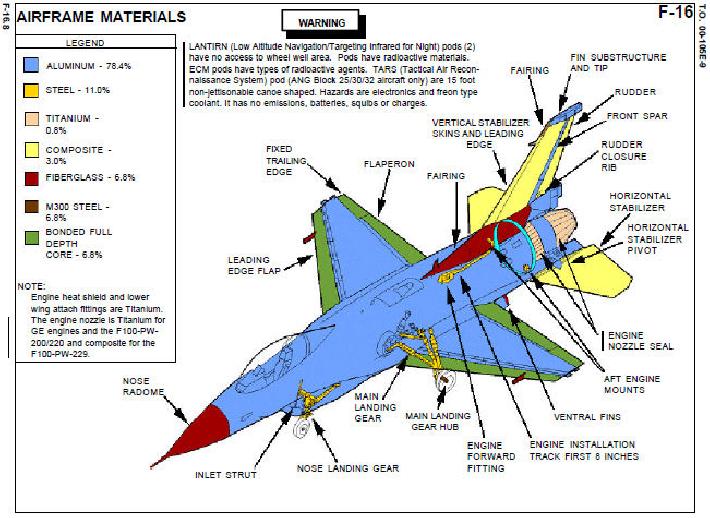 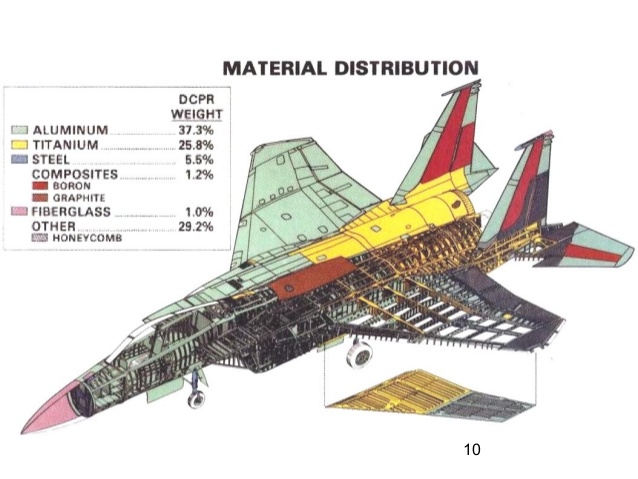 2
What are typical resins used in carbon fiber for aircraft? Are any resins impossible to recycle?