Why does the B-52 have such a tiny rudder?

The B-52 (aka Stratofortress, aka Grey Lady, aka BUFF) has a minuscule rudder for an aircraft of its size and wing-mounted engine placement: 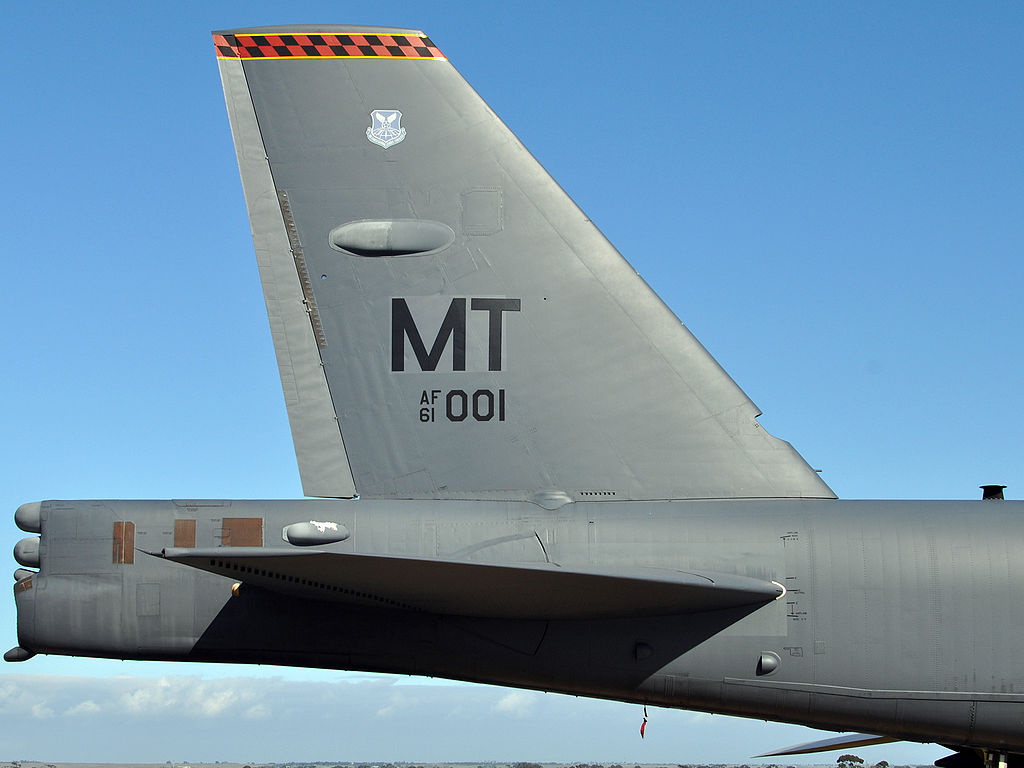 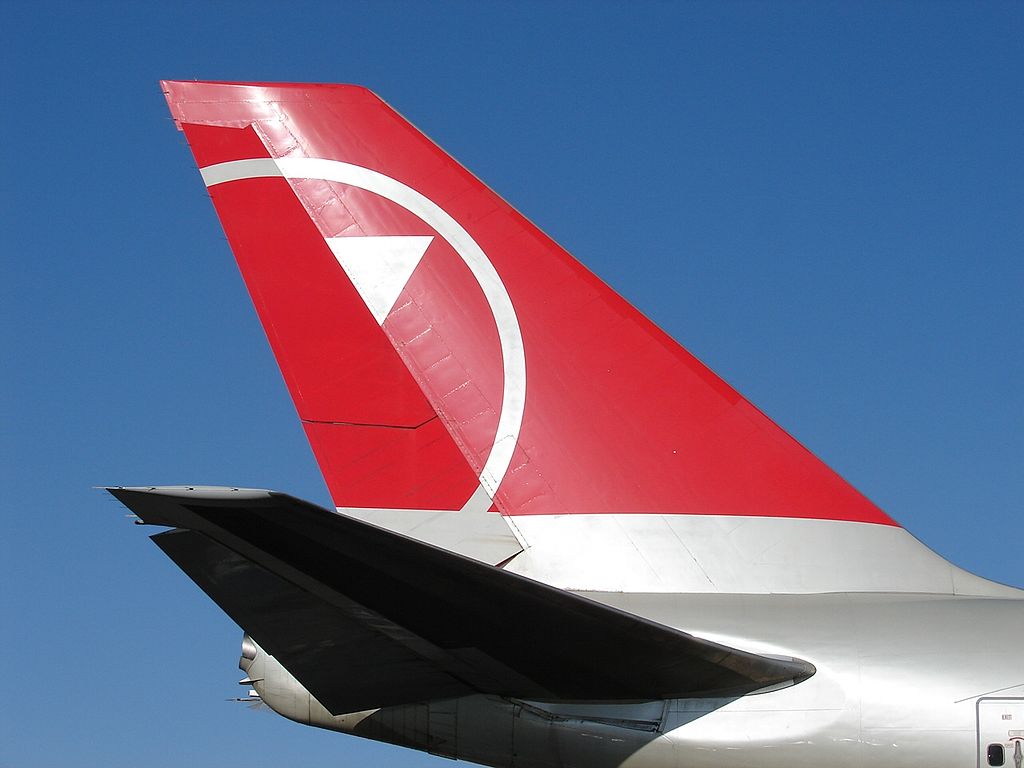 The B-52’s rudder is so small that it can’t be used to decrab the aircraft during a crosswind landing, meaning that it had to be designed to stay crabbed throughout the landing roll, forcing the designers to use a fully-steerable dual-bicycle landing gear layout (plus wingtip outrigger gears that are there solely to keep it from tipping over) instead of the conventional tricycle arrangement.

Why, then, did the B-52’s designers give it such a small rudder? One could argue that, because it has four engines on each side, rather than one or two or three, it doesn’t need a large rudder, because the thrust differential (and, thus, yawing moment) in the event of an engine failure would be minimal). However, if you look more closely, that argument doesn’t hold up, because the B-52’s eight engines are mounted in conjoined pods, two engines per pylon, which virtually guarantees that an engine failure will also take out the engine right next to it;1 thus, one would expect that the design case for the B-52’s rudder would be a double engine failure of both engines on one pylon, rather than the improbable case of one engine failing and somehow managing to leave the one next to it completely intact. So why isn’t the B-52’s rudder bigger?

1: For instance, the danger of cascading engine failures is one of the main reasons why no airliner designed after 1960 has ever used conjoined engine pods.

There are two reasons and they date back to the early designs for the aircraft. Keep in mind the tail is different now than when it was originally designed. Boeing has originally planned for an all moving vertical stabilizer but engineers doubted its reliability and the systems to operate it simply would not fit in the tail at the time. More importantly the original designs had sufficiently larger control tabs but this lead to an elevators and a rudder that had a lower critical mach number than the wing (i.e. the empennage would stall first). The engineers shortened everything to create a more stable situation as is noted in this passage:

Concerning the rudder, the situation is much worse. The B-52 rudder and elevator have an exceptionally narrow chord. Most airplanes have at least a 25% chord, which allows sufficient power and effectiveness in both yaw and pitch during takeoff, landing, and asymmetric conditions. The same is not true of the B-52 with its 10% chord rudder and elevator. The chord was reduced because original designs of the aircraft had the tail exceeding critical Mach prior to the wing. The chord of the tail was reduced to ensure that the wing reached critical Mach first.[15]

The original designers knew that the rudder was underpowered. An aircraft the size of the B‑52 requires a massive rudder that does not exist. This rudder is insufficient for the basic needs of the aircraft, let alone for asymmetric engine-out scenarios. Original plans called for an all moving vertical tail, the first of its kind. However, Boeing doubted the reliability of the hydraulic actuators necessary to achieve this. The design was also too heavy for the tail structure to sustain. Therefore, Boeing designed, built, and incorporated the yaw-adjustable cross-wind landing gear,[16] what is known to B‑52 aviators as ‘cross-wind crab.’ This system allows the B-52 to operate during normal conditions of take-off and landing in crosswinds. However, the true problem was asymmetry.

Apparently, an all movable vertical tail was to be used but didn't make it because of doubts about the reliability of hydraulic actuators.

I have a vague recollection that the entire empennage was reduced in size due to the introduction of computer-control of stability and manoeuvrability. The monitoring/ detection of and response to out-of datum attitudes meant that large control inputs were no longer required. I think this lead to a weight saving in the order of several tons. The concept had a fancy name- something like Control Configured Vehicle. If this is not totally correct- apologies; I'm recalling stuff from 50 years ago. Not many large aircraft have direct physical connection between inputs and outputs, even considering hydraulic, pneumatic or electric servo actuation. Pilots request a function and the computers rationalise and deliver the signals to the functions.

Not the answer you're looking for? Browse other questions tagged aircraft-design rudder b-52 or ask your own question.

33
Why do we never see high-bypass turbofan engines sharing the same nacelle on large airliners and similar aircraft?
38
Why don't modern aircraft have landing gear that can swivel to compensate for crosswinds?
0
How to glide in a circular pattern?

28
Why do we use pylons to mount the engines on jetliners?
33
Why do we never see high-bypass turbofan engines sharing the same nacelle on large airliners and similar aircraft?
16
Have we seen the last significant experiments in the configuration of jet airliners?
50
Why does this 757 have a propeller engine attached to the fuselage?
6
What are the issues involved in converting a quadjet into a twinjet?
6
Why does the A320 use the rudder for lateral control in mechanical law?
7
Why is alcoholic gasoline such a showstopper for aviation?
7
Why are the B-47’s inboard and outboard engines mounted so differently?
12
Why wasn't the 737 MAX's landing gear lengthened enough to mount the engines under the wings, rather than in front of them?
3
Why aren't quadjets required to remain controllable after a sudden, simultaneous failure of two engines on one side?