Why do some aircraft approach the runway with a long detour and others with a short one? [closed]

I am currently analyzing flight data. For some flights landing at Frankfurt Airport. 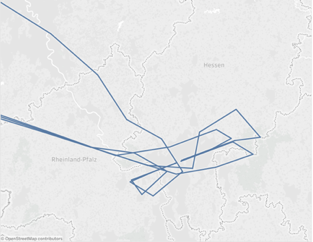 As you can see in the graphic, some of the planes fly out about 100km to then fly again towards the runway. Some only fly out for a short distance. How can you explain that?

I assume that after the cruise phase, the approach phase depends on factors such as traffic volume at the airport (how many want to land at my time (or in my 10min radius)) and take off?) How is the Operating direction at the airport and what kind planes want to land. Since I was told that the "plane mix" is also relevant, for example 2x MEDIUM aircraft and 3x large.

Are there rules for such behavior? How does the ATC decide here?

As you can see in this question and its answers, whether an aircraft has to go north or south is decided by ATC, as you also mention.

And, as you have correctly heard, the separation is influenced by the kind of aircraft flying in front of you, particularly during landing, as detailed in this answer.

So, in the end, an aircraft might have to fly further out if they have to put more distance between them and the preceding aircraft, or if there are more aircraft in the queue. ATC will decide in base of the currently available runways, the current amount of traffic, and whether any aircraft has declared any kind of emergency.

Note also that the approach paths for the airport are slightly asymmetrical (left side of page 11 and 12 of the pdf respectively), with ~50km on the south west approach, and ~65km on the north east one.

110
Why did this plane fly in a zigzag pattern?
10
Why would a commercal flight circle while enroute?
11
Who assigns an arriving aircraft a runway and runway exit to use?
7
What is the safe separation for landing a Cessna-172 behind a commercial airline jet?

11
Who assigns an arriving aircraft a runway and runway exit to use?
5
How can one fly a stabilized approach when the final approach path is curved?
6
Why are the stabilised approach criteria different for an instrument approach and a visual approach?
10
Did Kai Tak have a straight-in approach to runway 13 for higher-performance aircraft?
5
Why is the JAC VOR an Initial Approach Fix for the KJAC VORDME Rwy 19 Approach?