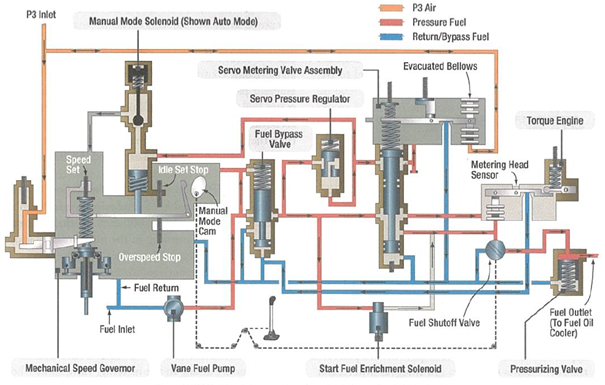 Picture is from EASA Modulo 14 Propulsion (B2) but it does not provide any useful explanation.

I can give you a generalized answer and most of the details you are looking for are hopefully buried here. You can think of it as 3 broad categories or generations of engine fuel control. First was pure hyrdomechanical, which used mechanical devices to regulate power setting and acceleration. The very first systems like on the Junkers Jumo and other early engines was not much more than a needle valve connected to the throttle. The pilot's eyes and brain using data from the gauges was all that prevented stalling/surging, overtemps, etc, needing very careful throttle movement and monitoring.

The first modern hydromechanical fuel control systems in the early 50s used mechanical regulating and governing devices so that when the throttle was moved it more or less commanded a power setting and the regulating devices would manage the amount of fuel admitted. This allowed things like "slam acceleration" where the engine could take sudden throttle changes smoothly, which was a no-no on the very early jet engines.

In the 70s, the idea of adding electronic control to fine tune fuel management got started and you could call this the second generation. This takes the traditional hydromechanical fuel controller and fine tunes the final fuel schedule in a way that can't be done mechanically. This is done by software (an Electronic Control Unit or ECU) that drives a metering device through a torque motor (a torque motor is like a rotary actuator that moves in proportion to a voltage applied and springs back to zero if the voltage is removed). There is still the old fashioned hydromech fuel controller and a baseline fuel schedule, but this is bypassed by an overlaid electronic fuel schedule, controlled by the ECU through its torque motor.

Most non-FADEC engines built after the 70s have this electronic fuel control, better thought of as electronically supplemented fuel control. When the electronics are turned off in this type of system, the engine reverts to its baseline hydromech fuel schedule.

The last is FADEC where most of the mechanical regulating devices are discarded and the entire management is by software controlling the entire metering system.

In the diagram what you seeing is a hydromech system with electronic control typical of an engine in the 80s. The electronic control is via the "torque engine" (or torque motor) on the far right. Everything else is standard hydromech controls. The Manual Mode Solenoid controls which has authority over the fuel scheduling; the hydromechanical components via the "mechanical mode cam" for manual mode, or the "metering head sensor" controlled by the torque motor for electronic mode.

In the cockpit if you turn the ECU off, the Manual Mode Solenoid transfers fuel control to the Manual Mode Cam which moves with the thrust lever. In manual mode the engine will roll back somewhat, and to get the same thrust setting you have to move the thrust lever up a bit. Also the engine will be a bit more sluggish in responses because it's basically reverted back to an older generation non-ECU engine.

Early non-FADEC models of the GE CF-34 turbofan and the PW-120 turboprops use this type of fuel control (and I assume most engines of that vintage).

You could think these ECU controlled engines as a bit like early fly-by-wire control, where you had a manual reversion mode with the traditional control linkages there in standby. A FADEC engine is like full authority FWB with no mechanical controls other than those components operated directly by the computer.

Not the answer you're looking for? Browse other questions tagged aircraft-systems engine fuel-systems propulsion airframe-and-powerplant or ask your own question.