Why do heavy departures wait 5-10 minutes on the runway at ZRH?

I'm frequently travelling to Zürich for business and I usually make my schedule so that I have at least an hour to do some planespotting and photographing at the ZRH airport.

Whenever I came to the airport, the runway usage was the same: RWY14 for all the landings, RWY28 for almost all the takeoffs, while RWY16 was used by heavies for takeoffs (usually the flights to Asia or to the USA). I noticed that once a heavy aircraft lines up at RWY16, it waits for some 5-10 minutes before it starts rolling (although it is already way behind its scheduled departure time). The only possible explanation that I could think of was that its engines would cause severe turbulence for the airplanes which are landing at RWY14 and that it has to wait for a significant gap between the landings.

Am I right? Or if not, does anyone know the real reason for these delays? 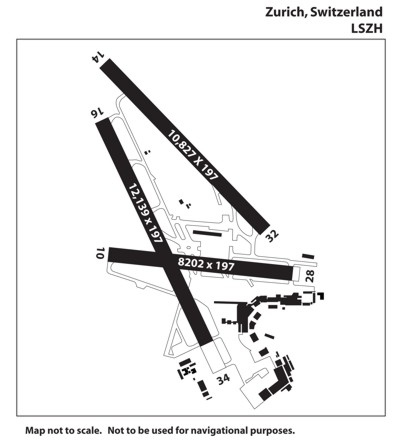 The usual reason is, that departures from runway 16 are not allowed to climb straight ahead due to noise restrictions over downtown Zurich. Instead they need to turn left, where they cross the departure path of runway 14. So if there are arrivals on 14, no departures on 16 are cleared, as in the case of a go around on runway 14, its departure sector must remain free. I've been watching planes stuck for half an hour at the line up 16 for that reason. Imagine that waste of fuel... ZRH's runway capacity, despite having 3 runways, is thus actually lower than for a parallel 2-runway setup (think about London Heathrow e.g.).

An A380's jet blast at take-off affects 540 m behind the plane. (The yellow contour is 16 m/s.) There is enough space behind runway 16. In general (ZRH aside), there's an easy fix for jet blasts -- jet blast deflectors.

Today around 1:50 pm UTC, an Emirates A380 (Dubai isn't affected by delays due to curfews so that removes one variable) departed right away after lining up. It was preceded by a smaller jet from runway 28, which intersects 16:

One possible explanation for the delays that you witness is waiting for runway 28 to be clear. Flights bound to European airports are on tighter schedules due to airspace congestion, so it's possible they get priority. Keep an eye on the activity of runway 28 on your next trip.

I don't know, but I have what I think is a reasonable guess.

First, if separation (wake turbulence mitigation) was the reason, then why would ATC block a perfectly servicable runway by having an aircraft line up and just sit there for upwards of 10 minutes? It would make far more sense to have the aircraft taxi and hold short of the runway, than to line up and wait, until there is a likely large enough gap in the traffic. Even if the first aircraft is holding short at the threshold of 16, unable to take off due to say separation concerns, it would still be possible to allow another aircraft to enter the runway from the next taxiway down, backtrack then line up, or to land on 16, if ATC wants to do so. (I would argue that this is probably inappropriate for other reasons, but at least the takeoff scenario looks no more complex than would be a takeoff on 14.)

Second, notice that 10/28 and 16/34 intersect at about a third of the runway from one end. (A third down the runway on 10 and 34, two thirds down the runway on 16 and 28.) Even not considering winds, this would severely limit ATC's ability to safely use those two runways simultaneously, especially for heavier airplanes, as they would need to consider also the situation at the intersection in the case of a successful or a rejected takeoff or, in the case of a landing, an airplane either landing long or executing a missed approach. All of these add complexity and risk.

The ATC mantra is safe, orderly, expedient, in that order. Safety comes first, so anything that compromises safety in the name of expediency is going to be a no-go from the start.

If the airplane was "well behind" its scheduled departure time, yet just sits on the runway for a good ten minutes, my first guess would be that whatever caused the initial delay might be causing further delay before the pilots feel comfortable beginning their takeoff roll, or before ATC clears them to begin the takeoff roll.

As an aside, engines don't cause wake turbulence per se; wings providing significant lift do.

There are many reasons that departures from runway 16 might be delayed.

If an arrival to runway 14 has to go around, it would not have adequate separation from an aircraft taking off from runway 16. There would need to be a adequate spacing in the arrivals to allow for a departure from runway 16.

As ymb1's answer shows, if both aircraft are departing to the north/east, their paths will also cross in the air. So if the controller decides to get the departures off of runway 28, they would need to wait for the last aircraft to get far enough east that there will be room for the departure from runway 16.

It's also possible that the aircraft have to wait for release so they can be integrated into the traffic flow. If they are significantly late, they may have lost their original spot in the flow, and it could take time before another opening can be made for them. This extends all the way to having a gate available at the arrival airport.

Any of these reasons could cause delays from departures from runway 16. Air traffic control would have them line up and wait so they are ready to go as soon as conditions allow. It sounds like heavy departures are the only use for the runway at the time, and if there's an emergency there are two other runways that ATC can use. ATC knows the traffic flow, and that they can afford to have an aircraft sitting on runway 16 waiting for takeoff.

Not the answer you're looking for? Browse other questions tagged air-traffic-control takeoff runways separation or ask your own question.

33
Should you wait to switch to the ground frequency until after crossing a runway?
5
What causes aircraft to swerve during takeoff?
5
Is airspace more crowded on days following cancellations or a large number of delays?
11
What is the optimal sequence of departures and arrivals on a single runway?
6
Must Part 91 pilots comply with runway departures marked as NA?
6
Why wouldn't KJFK offer the ILS for 22L?
8
Why did this aircraft take off in the opposite direction compared to the one used by other flights right before/after it?
11
What will be the immediate action by the pilot and ATC if any plane blocks the runway while landing?
19
Should I wait for Tower to provide runway exit instructions?