Why do carburetors tend to produce richer mixture at higher altitude?

The pressure drop in the venturi is proportional to air density and the fuel is at ambient pressure in the float chamber, so I would expect the fuel flow to reduce proportionally with density, and that response to preserve the fuel-air ratio over changing altitude.

But in practice that does not seem to be the case. Proper response to altitude requires additional modification that most carburetors don't have, so the pilot usually has to lean out the engine as they climb. What am I missing here?

(Update) More specifically, I would expect that at the same RPM, the volume flow rate will be the same—because the engine pulls in its displacement per revolution. Now velocity in the venturi $v$ is just

Where $\dot V$ is the volume flow rate and $A$ is the cross-section of the venturi. So it will also be the same independent of altitude. Since dynamic pressure

And that is also the pressure that pulls in the fuel (when the float chamber is open to ambient pressure). Substituting mass flow

and as long as $v$ is mostly constant,

Note: Did you notice the extra $v$ conspicuously missing from the last equation? That suggests the mixture should become richer with throttle opening—which is actually the reason there are extra fuel jets after the throttle that pull in extra fuel when the throttle is at idle and slightly above. It might also explan what is going on here, but would require explaining why the speed should increase when the density is lower.

Most simple carburetors use a simple venturi design that mixes air and fuel by VOLUME.

But, the correct air/fuel mixture must be based on MASS, not Volume.

Aircraft carburetors have a mixture control to "lean" the volume of fuel to the volume of air, and are then able to maintain the correct air/fuel ratio at all altitudes.

Leaning is not done to counter carburetors that do not "preserve the fuel-air ratio over changing altitude".

The [operationally] ideal stoichiometry (air:fuel ratio) is not fixed, it depends on what is being sought. Leaning is done because it provides better fuel consumption when less than full power is needed (see graph below), which coincides with cruise. 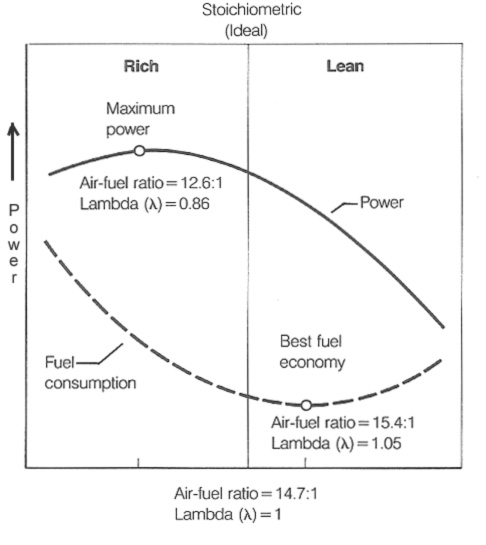 Rich mixtures also burn cooler, so leaning becomes practicable and easier on the engine in the colder air of the cruise altitudes.

It's not pressure that forces fuel into the venturi as much as the vacuum pressure sucking it out. Fuel is pumped or gravity fed to the carb, but then it's metered into the bowl by the float. Fuel sits in the bowl before getting pulled into the jets and then into the venturi. There is air in the bowl, sure, and as that air pressure decreases with altitude there is a bit of a decrease in the pressure behind the fuel, however the part you may be missing is that air can mix with a much higher ratio of fuel than what is ideal for an engine. Airplane engine carbs are generally tuned so at sea level they deliver slightly over the ideal ratio, this is done by restricting the fuel flow. If it wasn't restricted the engine would run rich on the ground.

As density altitude increases the amount of air going through the venturi decreases, but the air still can hold more fuel so the mixture richens even though there's less pressure.

14
Why do we lean the mixture when the air become less dense?

10
Why are updraft carburetors standard in aviation?
9
Which aircraft endure the highest Max Q's (aerodynamic pressure)?
19
Why does manifold pressure increase with power?
10
Why do the Lycoming HIO-360 A1A and IO-360 engines produce different power?
0
Why do piston engines have a lower fuel consumption with higher temperatures?
7
Why are some fuel-injected engines started with the mixture at idle cut-off?
3
Can leaning provide more power when running at full throttle?
2
How does the throttle position affect the speed of airflow to the engine?
6
Why are engines with carburetors hard to start in cold weather?
5
Why does pulling the mixture to idle cutoff increase the RPM slightly?