How do flaps deploy and stow with very large wing flex?

On large airliners, the wings are generally of the high aspect ratio types and hence very flexible. Now the flaps are attached to wing only through a series of tracks, and as the wings flex, these tracks change relative positions to one another as well. How is the flap designed so that it can ride on these tracks regardless of their positions? I scoured the internet for answers and the only vague one I got is this description

One of the flap tracks positions the flap and all others absorb horizontal displacement.

Intuitively this is like designing a door that can open and close with a doorframe that is sometimes straight and sometimes crooked. Is the door also flexible itself?

This question applies to not just flaps, but to spoilers, speed brakes and leading edge slots or drooping leading edges as well. How are they designed?

What that statement means is that with a 3 track panel, as the flap flexes with the wing, the total distance between the 3 tracks gets longer and shorter by some value, say an eighth or quarter of an inch or whatever. To accommodate this the center track is used to control the lateral position of the panel, while the inner and outer track has lateral side play built in to the roller system so the change in distance doesn't cause binding in the outer tracks.

Slat systems are the same. The center track has guide rollers that locate the slat and the outer ones are "floating" laterally by having larger roller clearances. Other panels on the wings like spoilers that are much shorter are able to get away with just using spherical bearings that allow some compliance as everything moves. 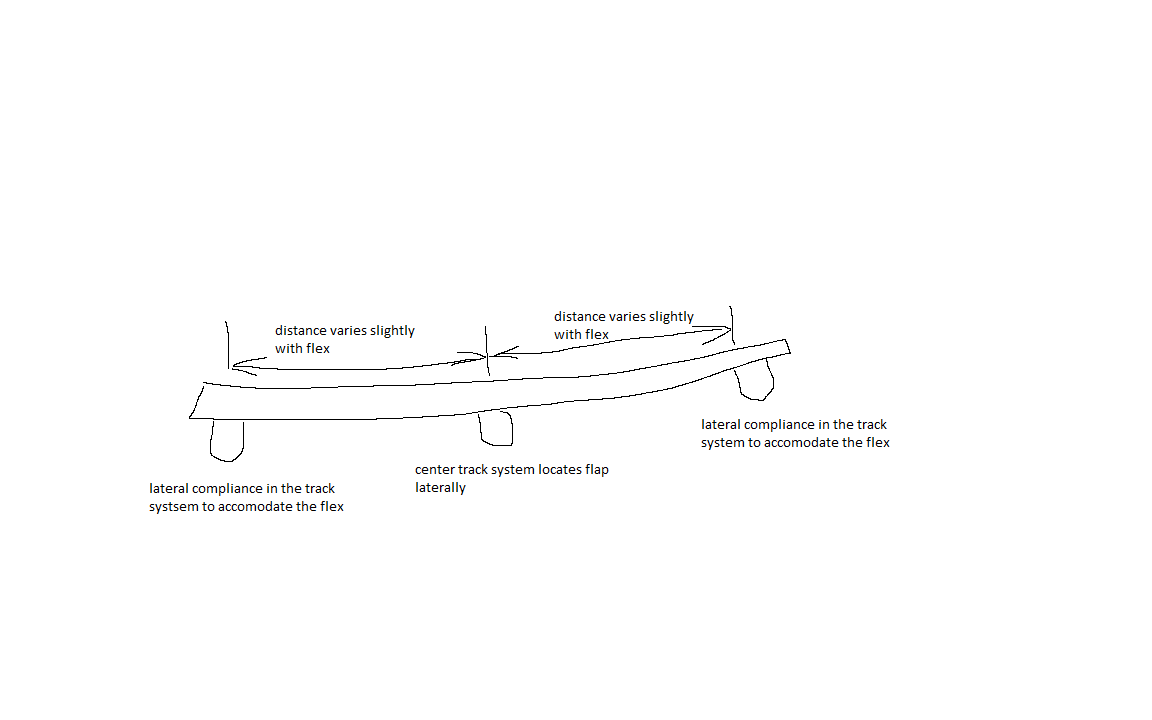 16
Is wing flex good?
4
What property of a wing allows it to flex?
8
Would a slotted "wing" work?
4
How does wing flex reduce wave drag?
4
How can we design a wing for cruising at very low speeds?
2
Would the Concorde have been better off using a tailed delta wing?
6
Why are landing gear retraction mechanisms mostly based on the four bar system?
3
Why don't aircraft owners put vortex generators on the top of their flaps to extend single flap lift creation past 40 degrees?
4
Why do almost all overwing exit slides open over the trailing edge of the wings, and almost none over the leading edge?
0
What suits best for lateral controllability at high Angle of Attacks- a vortex generator or wing slots?