What is “Defense Area” on a VFR Sectional Chart?

What is "Defense Area" on a VFR Sectional Chart? The words "DEFENSE AREA" (in all caps) appear all along the US/Mexico border in blue. It's the biggest text on the chart. Interestingly enough, the same words don't seem to be along the US/Canada border.

Someone on airliners.net said this:

You're correct, there is a difference between a ADIZ and a Defense Area. A defense area is an area established on non-federal lands located within the United States, its possessions or territories, for the purpose of safeguarding classified defense information or protecting government equipment and/or material.

The establishment of a national defense area temporarily places such non-federal lands under the effective control of the Department of Defense and results only from an emergency event.

I am surprised that it is charted though, unless of course the government is getting ready for the flood of illegals coming to California to get drivers licenses and registering to vote.

That makes it sound like a ground thing, not an air thing. Then there's this, in the CFR 99.3:

Unless designated as an ADIZ, a Defense Area is any airspace of the United States in which the control of aircraft is required for reasons of national security.

And in the AIM:

Defense Area means any airspace of the contiguous U.S. that is not an ADIZ in which the control of aircraft is required for reasons of national security.

So, what exactly is this Defense Area on my Sectional Chart and do I need to worry about it or think about it as I fly?

FAR 99.3 defines a Defense Area as an area in which air traffic can be controlled in the interest of national security. In other words, non-ADIZ airspace in which SCATANA or a similar plan can be implemented. In other words, all domestic airspace. It used to be clear that all airspace was Defense Area until FAR 99 got rewritten a couple of times in 2001-2004 when they were trying to figure out if the DC SFRA was an ADIZ. Now, the FAR that explicitly says that all non-ADIZ airspace is Defense Area is gone (to who knows where).

Nonetheless, all airspace that isn't an ADIZ is Defense Area, from sea to shining sea.

So why is it depicted on the southern border? To clarify that the airspace is not an ADIZ.

Take a look at this piece of the San Diego TAC. Notice how out in the ocean, the ADIZ is an actual 2-dimensional region. It's depicted with solid magenta lines with dots protecting the inside of the ADIZ. But at the beach, it devolves into a 1-dimensional line. But it's still depicted as the magenta line with dots. Look right there at the beach what has to happen, how the dots have to jump over the line. Thing is, since the ADIZ is a line there, the dots are actually outside of it, they can't protect the inside of it (since there is no inside to protect) and it looks like maybe all of California is an ADIZ, when it isn't. So the words DEFENSE AREA are printed there across the border from CONTIGUOUS US ADIZ to emphasize that the dots aren't actually protecting an ADIZ area; the ADIZ is too narrow to be correctly depicted.

Here is a "Defense Area" near KAPY: 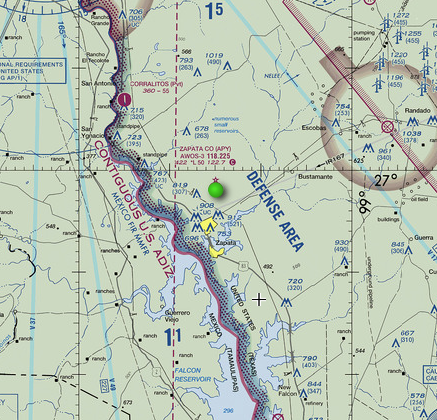 (I picked this area out of many examples because most of the others have SUA close/overhead that could easily confuse things.)

Unlike the ADIZes to the West, North and East of the US/Canada, the ADIZ along the US-Mexico border is zero-width, so my guess is that the US airspace on the inside of the South ADIZ is designated a "Defense Area" with slightly different rules to account for the fact that in theory VFR flights don't need a DVFR flight plan and ATC contact to fly within it. However, going anywhere near that border (even on land) is best avoided in practice due to routine harassment by Customs and/or Immigration officials.

Not the answer you're looking for? Browse other questions tagged faa-regulations regulations or ask your own question.

9
What is the benefit or motivation for having Class G airspace?
12
Which parts of class E airspace can an ultralight (part 103) fly in without prior ATC authorization?
8
May aerobatics be performed over a controlled airport without getting a waiver?
1
What would be the airspace class when no vignette is visible on a US VFR sectional chart?
10
What is the primary reason that the non-towered airports ACV, TVL, SGU, BIH, and SIT/PASI have E4 extensions to E2 airspace?
4
May the Class-E-to-surface airspace near Eagle County Regional airport (KEGE) and Marshall AAF (KFRI) be ignored when the tower is open?
0
At what altitude, if any, may an ultralight overfly the Gallup airport (KGUP) with no prior authorization without violating FAR 103.17?
0
What indication has the FAA given that phrases like “surface area of Class E airspace designated for an airport” do or don't include E4 “extensions”?
2
How is the term “Coast” defined for FAA regulatory purposes?
1
Why does CFR §91.215 part (b) list specific areas for transponder operations?