In an airplane wing, which control surfaces are primary, and which ones are secondary? 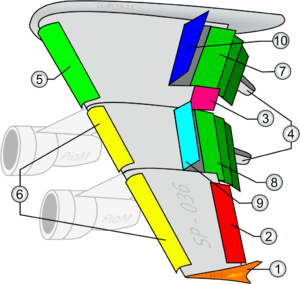 I got this device detail of a wing. Those parts are:

In controlling an airplane (if it really has that pairing devices), if we have to use them one after another, which one is said main (primary) and which is secondary?

Generally speaking, if a wingtip fence or a winglet is there, it's fixed and can't be moved, so there is no question of it being used before or after the others, although since it's always there I supposed you could say it's used before any of the others. I say generally because I seem to recall hearing recently of an aircraft that has a movable winglet in some manner, but that may just be my imagination.

Insofar as labeling is concerned, control surfaces that are split—an inboard and an outboard section—are usually called just that, as in the inboard ailerons and the outboard ailerons.

Different makes of aircraft may have different orders of usage in some manner, but since your image pretty much matches that of a Boeing 747-100/200 (except they have no wingtip fence or winglet), let's use them for explanation.

The flap tracks (what you see on the image are the "canoes" covering the actual flaps tracks) move when the flaps are deployed. The flaps will usually operate fine even if a canoe leaves the airplane in flight (happened to me once), and as I remember you're allowed to defer replacing at least one of them, but with a performance penalty.

The spoilers/speed brakes (whatever you want to call them—the argument still rages—are deployed by the pilots using a handle, pulling it aft deploys them, and the inboard spoilers always deploy. Whether the outboard spoilers deploy depends on aircraft speed as determined by the flap setting: no flap deployment, no outboard spoiler deployment.

The primary flight controls on a conventional fixed-wing aircraft are the ailerons, elevator and rudder.

Since your question is restricted to the wing, only the ailerons are commonly placed on it. However, on modern aircraft, some of the other surfaces are wired to move together with the ailerons. For example, the spoilers or flaps, which are then called spoilerons or flaperons.

The elevator and rudder can be combined into a single set of surfaces in a V-tail, but this solution is not widespread due to its higher mechanical complexity and weight.

The rest of the surfaces on your image are either the winglets, high-lift devices or spoilers. The flaps and slats are generally deployed at the same time, except in edge cases: the first detent on the flap controls might deploy only the flaps, then the second one would activate the slats as well. This depends on the specific aircraft in question.

Furthermore, on an airliner wing like the one pictured, there would be a bias toward deflecting only the inboard surfaces when flying at high airspeeds, to account for the high dynamic pressure in those conditions.

Not the answer you're looking for? Browse other questions tagged aircraft-design wing aircraft-systems or ask your own question.