How do pilots decide whether to circumnavigate bad weather?

How does an airline pilot decide in the air whether to circumnavigate or fly through bad weather visibly looming ahead and/or displayed on the weather radar ? 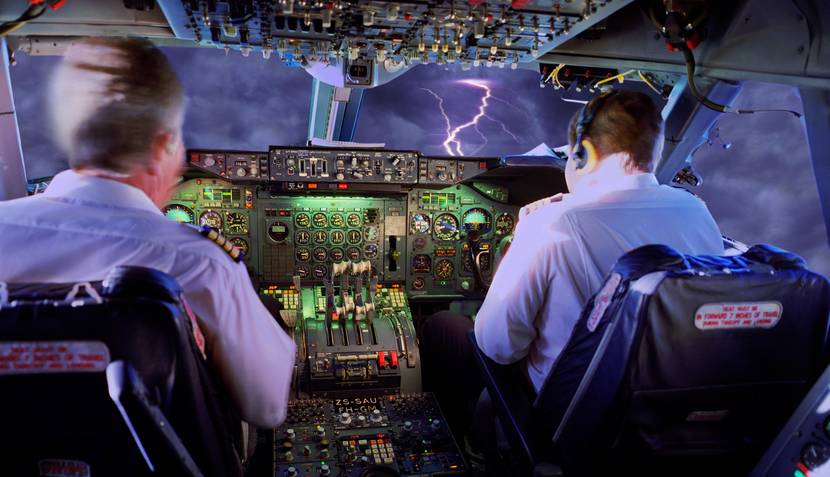 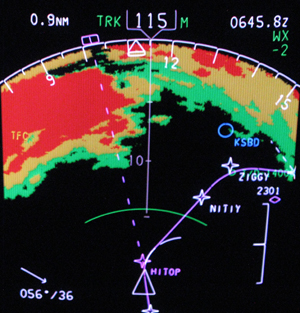 Easy. You don't go through, or close to, a thunderstorm cell (a red area, which is lots of water), period. You decide on a heading change to navigate around it, request it from ATC, and if the heading you want is not forthcoming, you tell ATC you are altering heading for weather. You are not required to endanger the aircraft to comply with an ATC clearance of any kind. And getting close to a cell is endangering the aircraft.

Different airlines will have different policies on some of the details of getting around cells, like they have to maintain 20 miles minimum, upwind if possible. In visual conditions where you can see the cell, same deal. Alter heading to upwind side x miles (you don't want to fly under the anvil which is downwind, even if the air is clear in front of you, because you can run into hail falling from the anvil).

Besides thunderstorms, the other big bugaboo risk wise is icing the plane can't handle. Same deal, you ask for higher or lower, and if icing is becoming dangerous and you need to move now, you tell them you are going higher or lower.

There are potentially as many reasonable answers to your question as there are pilots that have had to regularly pick their way through lines of thunderstorms. In that sense, the answers may be as much opinion based as factual. However, I think there's enough objectivity involved to hazard my hopefully somewhat objective opinion.

Let's say the image of the radar display you posted is what we have to work with. We're over the open ocean a long ways from any ground based radar.

Further, let's assume we have the elevation, sensitivity, and range of the radar appropriately selected, and that what we see on the display is all that we have to contend with along our straight-ahead route, at least insofar as the red areas, and that a major detour left or right to avoid the entire line would mean stopping short of our destination to refuel. Thus I'm going to pick my way through what I see ahead.

I'm looking at two potential paths if in a passenger airplane, three if in a freighter, the difference being that in a freighter I'm not concerned with passenger comfort—boxes don't complain.

Path 1 (Pax): Fly only in green and black with a short bit through the orange on a course of 122° to the green such that a left 90° will take us into the black, then work through the black until a course of 102° will take us out of the line. That's tempting, but can I trust the radar? The opening out of the line has on it's left side a rectangular end of the orange, and nature doesn't usually deal in nice rectangles. Plus the radar return for that clear way out is behind a substantial area of red, which would have attenuated the signal.

Path 2 (Pax): Same as Path 1 except stay on 122 util out. The disadvantage is once past the point where a left 90° turn would take us to the black, there's a significant amount of orange. If there are 480 people in the cabin, there's going to be projectile vomitting, and when the first person goes, the dominoes fall.

Path 3 (Freighter): Obviously a freighter can use either of the passenger paths, but without having to be concerned for passengers, instead of an initial course of 122, use 110 (saving fuel) until into the black and then work around left.

Which would I use? I think I'd go for Path 1. If the opening really isn't as displayed, my best guess is that a dash through orange is what it will be, and if there's a little red, it will be short. I don't think any plan I ever started with didn't have to be changed as the picture ahead changed.

The majority of my experience with threading my way through thunderstorm lines enroute was five years of flying the Indonesian Hajj—Jakarta to Jeddah and return. It was four hours of open water from the west end of Java to Sri Lanka, and often meant crossing the intertropical convergence zone (ITCZ). We pretty much flew a great-circle. Had to to make it without refueling, and that meant crossing the ITCZ at an acute angle rather than at 90°, and that extended our time in the zone.

When faced with bad weather there are several considerations. A practical one is whether you will be able to get to your destination. That is, will the weather be worse there, or will there be conditions which prevent your arrival. For example, flying through pre-frontal precipitation (precip hereinafter) may be pale in comparison to landing with 65k gusts running perpendicular to a single runway.

So looking at the actual enroute threats, they fall into the following categories: turbulence (mountain wave, thunderstorms and other situations which pose the risk of loss of control to the aircraft, and have the risk of exceeding operational parameters of the aircraft), icing (airframe, and to a lesser extent powerplant icing and prop icing) and finally precipitation (hail, which can cause structural damage, or even heavy rain which can cause powerplant failure. So the issues are turbulence, icing and precipitation. We will ignore other phenomena, which are much more situational, such as volcanic ash, etc.

Up until a few years ago, onboard radar was the primary method of detecting precip. The size of the dish is a factor in the performance of the radar unit, and single engine aircraft with wing mounted radar are at a disadvantage. While onboard radar may show precipitation, it can be attenuated by near-field precip, masking heavier precip in the far-field. Smaller units are more susceptible to this than larger units. Large aircraft tend to have large antennas and are more effective at reducing near-field attenuation. The simple strategy with radar is to avoid flying into areas which show heavy precipitation. More complex strategies look at precip patters such as hook clouds, which may indicate threats such as tornadic activity. Heavy precip, indications of hail, hook clouds, are all predictors of turbulence, and flag areas and routes to avoid.

Today, NEXRAD pulse-Doppler radars are aggregated and processed and provide imagery via uplink to aircraft with more effective large area coverage than onboard radar. NEXRAD may be used in smaller aircraft, and may also be utilized as supplemental area coverage for situational awareness.

Most, but not all radars output three or more levels of returns. Level 1, green, is generally considered to be light precip and is normally flown through. Level 2, yellow, corresponds to moderate precip, and will have turbulence. Level 3, red, correlates to heavy precip, and may contain thunderstorms with risk of severe turbulence and structural risk from the turbulence. Normally level 3 is avoided.

Onboard radar has a tilt capability and is able to provide some information as to what the precip levels are at different slants from the aircraft, which can then be used to help interpret activity as well as be factored into route selection.

Networked radar, such as NEXRAD, not only provide the integration of multiple stations, but can also provide post-processing to reduce artifacts and overcome single-station radar limitations.

Non-radar methods of determining turbulence are also effective at avoiding bad weather. Discharge detectors, which process RF from static discharges are effective at displaying turbulence in mountainous regions, where there is not enough moisture in the air to show clear air turbulence and mountain wave activity. These devices have proprietary signal processing to classify and display various types of static discharges and provide pseudo range information. These units are very effective, and when coupled with both onboard weather radar and NEXRAD provide the highest level of awareness to threats from turbulence and thunderstorm activity.

The answer the original question, circumnagivation decision making is done with risk analysis of the radar imagery information available, as well as PIREPs and ATC provided supplemental information. These are factored using the specifics of the flight, and company guidance to determine whether the flight continues, gets diverted, and how the pilots will elect to route themselves between and through threats.

Not the answer you're looking for? Browse other questions tagged safety airline-operations navigation weather weather-radar or ask your own question.

20
How does the weather radar work?
16
Can commercial airliners fly over hurricanes?
6
Can pilots choose runway and landing direction?
12
How do airlines handle SIGMETS?
3
When do pilots facing bad weather turn back (U-turn)?
-1
Did AF447 cross dangerous weather?
0
How to increase your chances of survival in a plane crash?

9
How much compensation does an unruly passenger have to pay to an airline if the flight has to be diverted to remove them?
20
How does the weather radar work?
10
How does one train for making landings and takeoffs in bad weather?
7
What in-flight weather info is available to commercial pilots?
8
How does an organization decide to evacuate planes (e.g. in a hurricane)?
3
When do pilots facing bad weather turn back (U-turn)?
22
How did pilots avoid thunderstorms and related weather before “reliable” airborne weather radar was introduced on airliners?
4
How does an airline decide on an engine?
6
How does a plane's weather radar ignore returns from other weather radars?