Will Tower repeat an initial heading if it's part of my IFR clearance?

Is the Tower controller obligated to repeat the heading to fly in my takeoff clearance, or is it expected that I do what was in the clearance issued to me?

Yes, the FAA can and will take action in that scenario. I know because it happened to me :-)

A couple of years ago I was departing IFR from KPDK and my clearance included a right turn after departure. It was a busy and very hot day and I had to sit and hold for release (in a C182 in 100F heat...), so when Tower offered to get me out if I could depart immediately, I jumped at it. Tower cleared me for immediate takeoff without repeating the right turn instruction and I forgot about it in the rush.

I climbed out on runway heading and I started thinking that Tower was waiting a long time to turn me over to Departure. When they did, Departure told me to turn right immediately but I had to say "unable" because I now had obstacles to my right. I was vectored back on course and Departure asked me twice what the Tower had cleared me for, so it was obvious that something had gone wrong although they didn't give me a "possible pilot deviation" warning. Fortunately I was never close to busting the ATL Bravo.

I got home, listened to LiveATC, realized that I'd forgotten the right turn instruction, filed an ASRS report and forgot about it. 89 days later the FAA called to investigate (they have 90 days to act) because ATL Approach had reported it as a "course clearance deviation". Long story short, after a couple of calls and emails they dropped the whole thing without any record because they said it was a trivial incident and I'd shown a positive and "compliant" attitude with them. Although I have to imagine that if I'd busted the ATL Bravo or caused a loss of separation, the outcome might well have been different.

I don't know whether Tower is required to repeat the initial heading instruction (it may be in the ATC Orders), but my experience certainly shows that you can't rely on it. I commented in my ASRS report that if Tower had repeated the instruction it could have helped to prevent the whole issue.

It is expected that you will do what was in the clearance issued to me, which you read back as part of the clearance acceptance process, unless the tower modified it prior to giving you clearance to take the runway and depart.

Technically yes. In the absence of any other instruction, the tower would expect you to turn to the heading given in your departure clearance at the appropriate time, which would be after passing 400 ft. So if you continued on runway heading after 400 ft, the tower controller will likely watch for a while, then if he/she is convinced you are going to continue on runway heading, would probably give an instruction to fly the correct heading and do nothing more, or ask you what you are doing, or something similar.

Whether you get busted for it would depend on a lot of things, like the air traffic unit's policy, your demeanor, whether the controller thought it was an honest minor slip up with no ramifications, or a something that caused a traffic conflict and got people excited, and so on.

That sort of thing was why I used to go out of my way to be super friendly and polite to controllers (a cheerful "good morning" when checking in never hurts as long as it isn't burning up too much air time during busy periods). Like anybody else, controllers enjoy happy, cheerful professional interactions more than not, and this often buys that little bit of goodwill that makes the difference between getting busted or not in borderline situations.

If you are given a heading, you must read it back. If you read it back, you have acknowledged and accepted it, and are required/expected to comply. If you do not, you are in violation. If you cannot take the heading assigned, you must say so, and do not accept the heading.

ATC would be all over you if you don't follow the heading that you say you will. They can report you to the FAA, and they may take action against you. If there is no immediate risk, likely nothing will happen. If you cause a near miss, or other real incident, then you'll be more likely to be suspended or fined.

ATC's job is not to repeat instructions to you, it is your job to repeat them to yourself. Write it down.

In many cases, Tower CANNOT give you a heading because it will supersede your clearance.

For example, assume you're at KPSP and assigned the Cathedral One departure. 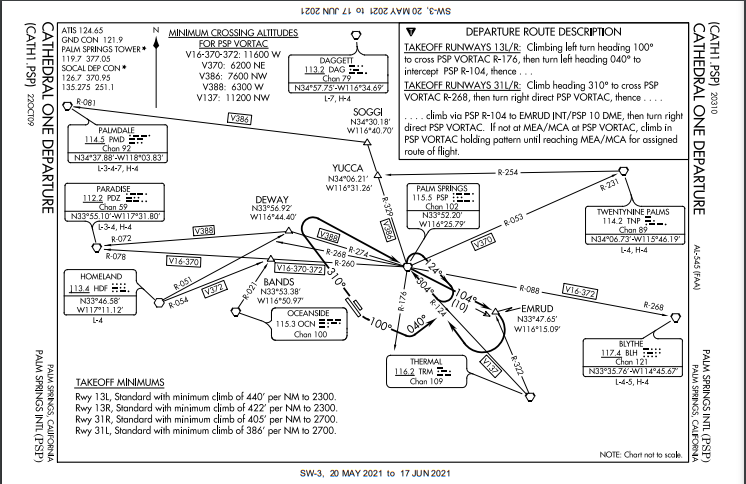 However, right before takeoff, tower says, "fly runway heading." Note that the Cathedral One departure DOES start with runway heading for 31L/R. And yet, it's time to do a victory dance because now you don't have a fly that crazy departure! Tower just gave you a VECTOR!

Ref 7110.65 "Departure Procedures (DP). If an aircraft is vectored off a published Standard Instrument Departure (SID) or Obstacle Departure Procedure (ODP), that vector cancels the DP and ATC becomes responsible for separation from terrain and /or obstructions. IFR aircraft must be assigned an altitude."

7
When should an Obstacle Departure Procedure (ODP) be used?
44
Who has the higher authority, the pilot in command or ATC?
16
Why are turbine-powered aircraft "considered ready for takeoff"?
26
Is it a flight violation to mishear ATC instructions for exiting the runway?
13
What is the correct phraseology for changing the runway of a landing clearance?
34
Do pilots need a clearance to go around?
15
Can an issued landing clearance be replaced with "continue approach"?
0
Does Clearance Delivery operate in the same way for airports in Bravo, Charlie and Delta airspace?
19
Should I wait for Tower to provide runway exit instructions?