Forces that wing attach fittings must transfer to fuselage?

I just saw the naked wing (it didn't have its wing fabric) of a Weedhopper ultralight and wondered the types of forces that the wing lift struts must transfer to the fuselage, apart from the apparent lift force?

I've made an insanely oversimplified sketch to show the general loads on something like a weedhopper. All of the attachments are pin joints that can't resist rotation about the pin, and therefore take shear loads only.

It's a simple pin jointed triangle, complicated by the fact that the main element is a long beam extended beyond the triangle, loaded across its axis. Most of the weight of the airplane is on the main lift struts, with mostly a compression force on the root fittings but with some up or down shear as well, depending.

Drag and anti-drag loads on the wing, and pitching moments also add or subtract from the shear loads caused by the lift force on the root fittings. Working it all out gets pretty complicated.

On a Twin Otter, with strut attachments way inboard at the nacelles, the root shear loads are more substantial and are inboard and down.

On the Weedhopper my guess is the lifting force transmits an upward and inboard shear load to the root bolts and this force varies with drag loads and pitching moments. 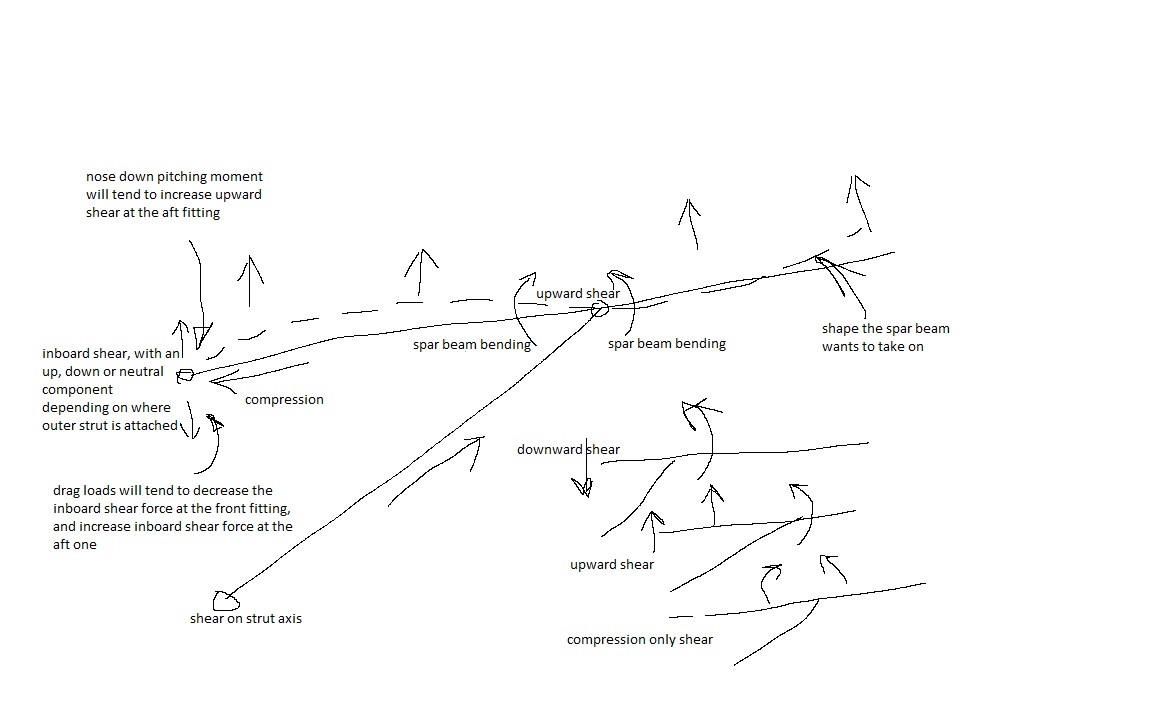 For your first question, it depends on the way they are attached, as is often the case in structures. I haven't seen this model up close to know their fitting type, but:

For your second question, I believe you mean to ask for what part of the overall lift are the lift struts responsible for. That I cannot readily answer without some calculations I don't have time for right now, but it is not as straightforward as you imply. The Wing-Fuselage-Strut structure is hyperstatic (statically indeterminate or over-constrained) so it is a bit too long to napkin-math.

10
How is a wing joined to the fuselage?
3
What is that term to describe the wing motion range?
3
Accounting for torsional forces during wing load tests
2
Does the wing to fuselage fittings of an airplane ever experience shear load?
3
For slow-flying ultralights, how would a delta wing compare to a biplane layout of equal wing area?
2
How to determine the compressive force in the spars of a strutted wing?
2
How much lift does the wing attach fitting actually carry?
5
How to calculate bending moments and shear forces on a wing?
13
Can someone identify the Make and Model of airplane that this fuselage belonged to?